In God we trust, maybe, but not each other | Inquirer Lifestyle ❮ ❯ 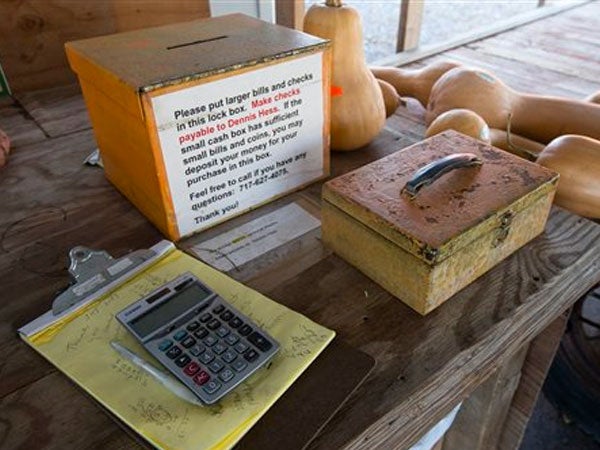 In God we trust, maybe, but not each other

We’re not talking about the loss of faith in big institutions such as the government, the church or Wall Street, which fluctuates with events. For four decades, a gut-level ingredient of democracy — trust in the other fellow — has been quietly draining away.

These days, only one-third of Americans say most people can be trusted. Half felt that way in 1972, when the General Social Survey first asked the question.

Forty years later, a record high of nearly two-thirds say “you can’t be too careful” in dealing with people.

An AP-GfK poll conducted last month found that Americans are suspicious of each other in everyday encounters. Less than one-third expressed a lot of trust in clerks who swipe their credit cards, drivers on the road, or people they meet when traveling.

“I’m leery of everybody,” said Bart Murawski, 27, of Albany, New York. “Caution is always a factor.”

Does it matter that Americans are suspicious of one another? Yes, say worried political and social scientists.

A society where it’s easier to compromise or make a deal. Where people are willing to work with those who are different from them for the common good. Where trust appears to promote economic growth.

Distrust, on the other hand, seems to encourage corruption. At the least, it diverts energy to counting change, drawing up 100-page legal contracts and building gated communities.

Even the rancor and gridlock in politics might stem from the effects of an increasingly distrustful citizenry, said April K. Clark, a Purdue University political scientist and public opinion researcher.

“It’s like the rules of the game,” Clark said. “When trust is low, the way we react and behave with each other becomes less civil.”

In fact, some studies suggest it’s too late for most Americans alive today to become more trusting. That research says the basis for a person’s lifetime trust levels is set by his or her mid-twenties and unlikely to change, other than in some unifying crucible such as a world war.

People do get a little more trusting as they age. But beginning with the baby boomers, each generation has started off adulthood less trusting than those who came before them.

The best hope for creating a more trusting nation may be figuring out how to inspire today’s youth, perhaps united by their high-tech gadgets, to trust the way previous generations did in simpler times.

There are still trusters around to set an example.

Pennsylvania farmer Dennis Hess is one. He runs an unattended farm stand on the honor system.

Customers select their produce, tally their bills and drop the money into a slot, making change from an unlocked cashbox. Both regulars and tourists en route to nearby Lititz, Pennsylvania, stop for asparagus in the spring, corn in the summer and, as the weather turns cold, long-neck pumpkins for holiday pies.

“When people from New York or New Jersey come up,” said Hess, 60, “they are amazed that this kind of thing is done anymore.”

Hess has updated the old ways with technology. He added a video camera a few years back, to help catch people who drive off without paying or raid the cashbox. But he says there isn’t enough theft to undermine his trust in human nature.

“I’ll say 99 and a half percent of the people are honest,” said Hess, who’s operated the produce stand for two decades.

There’s no single explanation for Americans’ loss of trust.

Trust has declined as the gap between the nation’s rich and poor grows ever wider, Uslaner says, and more and more Americans feel shut out. They’ve lost their sense of a shared fate. Tellingly, trust rises with wealth.

“People who believe the world is a good place and it’s going to get better and you can help make it better, they will be trusting,” Uslaner said. “If you believe it’s dark and driven by outside forces you can’t control, you will be a mistruster.”

African-Americans consistently have expressed far less faith in “most people” than the white majority does. Racism, discrimination and a high rate of poverty destroy trust.

Nearly 8 in 10 African-Americans, in the 2012 survey conducted by NORC at the University of Chicago with principal funding from the National Science Foundation, felt that “you can’t be too careful.” That figure has held remarkably steady across the 25 GSS surveys since 1972.

The decline in the nation’s overall trust quotient was driven by changing attitudes among whites.

It’s possible that people today are indeed less deserving of trust than Americans in the past, perhaps because of a decline in moral values.

“I think people are acting more on their greed,” said Murawski, a computer specialist who says he has witnessed scams and rip-offs. “Everybody wants a comfortable lifestyle, but what are you going to do for it? Where do you draw the line?”

Ethical behavior such as lying and cheating are difficult to document over the decades. It’s worth noting that the early, most trusting years of the GSS poll coincided with the Watergate scandal and the Vietnam War. Trust dropped off in the more stable 1980s.

Can anything bring trust back?

After all, the Internet can widen the circle of acquaintances who might help you find a job. Email makes it easier for clubs to plan face-to-face meetings. Googling someone turns up information that used to come via the community grapevine.

But hackers and viruses and hateful posts eat away at trust. And sitting home watching YouTube means less time out meeting others.

“A lot of it depends on whether we can find ways to get people using technology to connect and be more civically involved,” Sander said.