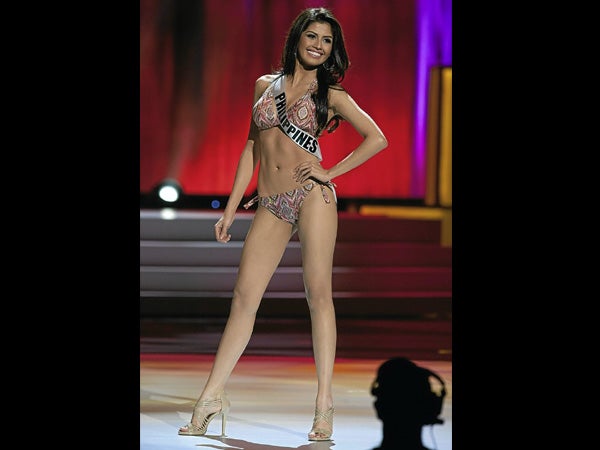 A major shake-up on how candidates to the Binibining Pilipinas pageant will be selected next year now looms following Shamcey Supsup’s third runner-up finish in the recently concluded Miss Universe pageant.

“Aside from her beauty and her figure, she’s also a woman of substance. You saw that in the answer and in the accomplishments that she’s had in her young life,” she added.

Before joining the Binibining Pilipinas pageant early this year, the 25-year-old native of General Santos City had no prior pageant or modeling experience. She was working as a construction architect when she signed up for the competition.

The Philippines and Ukraine are the only two countries to advance to the Top 5 in the Miss Universe pageant for two years in a row, and De Castro is optimistic that the momentum will not go to waste for the Philippines.

It has been 38 years since the country last took the title when Margarita Moran won in Greece in 1973, only four years after Gloria Diaz became the first Filipino woman to bag the crown. Miriam Quiambao almost became the country’s third Miss Universe winner when she placed second to Botswana’s Mpule Kwelagobe in 1999.

All eyes on Dianne Necio

With Supsup’s impressive third runner-up finish in the Miss Universe pageant, all eyes are now on Dianne Necio, the country’s representative to the Miss International competition which will be held in China on Nov. 7.

But the 19-year-old Bicolana is unperturbed, and said she has become even more inspired rather than pressured by Supsup’s feat.

“I’m definitely inspired,” Necio told the Inquirer during the Miss Universe viewing hosted by the Binibining Pilipinas Charities Inc.  at the Araneta Coliseum’s VIP room yesterday morning. The Inquirer was the only newspaper in the exclusive affair.

“We believed in Shamcey from the very beginning. We are very proud of her. And I hope I will also do the country proud in the Miss International pageant,” Necio added.

She also praised Shamcey’s performance during the entire Miss Universe pageant, held Monday night (Tuesday morning in Manila) at the Credicard Hall in Sao Paulo, Brazil. “She was so great! We were confident of her. And I know she will share with me some tips when she comes home,” declared Necio.

“She did her best, in her walk in swimsuit and evening gown, she really did her best!” exclaimed Manjon. “We’re proud of her. Getting in the Top 5 is an achievement on its own, and she is very much deserving,” she added.

Tugonon, meanwhile, said: “She’s great! I’m super grateful to God. Come to think of it, there were more than 80 countries and she placed fourth. Every Filipino should be proud of what she has accomplished.”

Second runner-up Mary Jean Lastimosa, one of Supsup’s close friends, was not able to join the viewing because she was not feeling well and had to stay home.

But she sent this message to the Inquirer via text: “Ang galing ni Shamcey!”

Necio expressed optimism that Supsup’s success would rub off on her when she competes in the Miss International pageant. “I am now more eager to compete!” she declared.