Isidro’s “Low Tide” captures sea currents building up to a dangerous mass. “Winter” hints at  the dangerous melting ice of the North Pole.

“Black Wind Coming” might as well tell us about the fury of Supertyphoon “Yolanda,” but the visual rendition puts us in peaceful repose, a quiet way of saying that this is the way the world evolves with water, wind and fire.

“Abstract expressionism is more meaningful for me because there is more freedom of expression in my works,” said Isidro. “In the many years that I’ve been painting, I boldly experimented with the use of mixed media, relative to my distinct subject matters.”

The exhibit is a retrospective show,  a collection of old and new works dating to 1968. 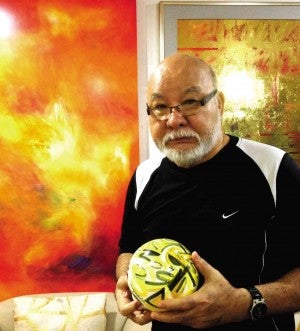 Isidro, who hails from Calbayog City, Western Samar, has about 100 works in his latest  exhibit. Part of the proceeds will go to artists  affected by “Yolanda.”

“It is heartbreaking because Typhoon Yolanda was the strongest and the most devastating typhoon that has ever hit our province,” Isidro said. “Some artist friends from Eastern Samar and Leyte have asked for assistance, and we all have to help.”

Before Yolanda, the painter had experienced equally worst typhoons in his early Calbayog days.

“Strong typhoons in my home province are a regular occurrence during the rainy season,” the artist said. “At a young age of 6, I experienced a very strong typhoon—‘Jane’—which flooded Calbayog to more than 10 feet deep of sea water.  From the second floor of our ancestral house, I remember seeing floating boats and barges about a few inches below our window sill.”

Thus, the subject of climate change has been part of his past and current works.” My favorite entries have always been those that are relevant to the environment and the changing world.”

Now a grandfather of three, Isidro has never left the brush since his college days at  University of Santo Tomas, where he was a consistent prizewinner in art competitions, campus or national.

His world immersion included   a decade in California. He participated in exhibits in the US, Israel, India, Hong Kong, China, Indonesia, Spain, Germany, France, The Netherlands.

“I still paint regularly while I still can, and I always try to explore new possibilities to cope  with the changing world,” he said.

“Aside from holding solo exhibits at least once a year, I also joined group exhibits upon invitation. Because I feel I have so much to share and to communicate with my art to the young generation of artists.  In the past three years, I have joined group exhibitions in Singapore, Indonesia and Spain.  I attend local and international art workshops to understand more about the changing world.”

Asked what message he wants to impart in his latest exhibit, Isidro replied, “Man has a very important obligation to preserve and protect Mother Earth.”