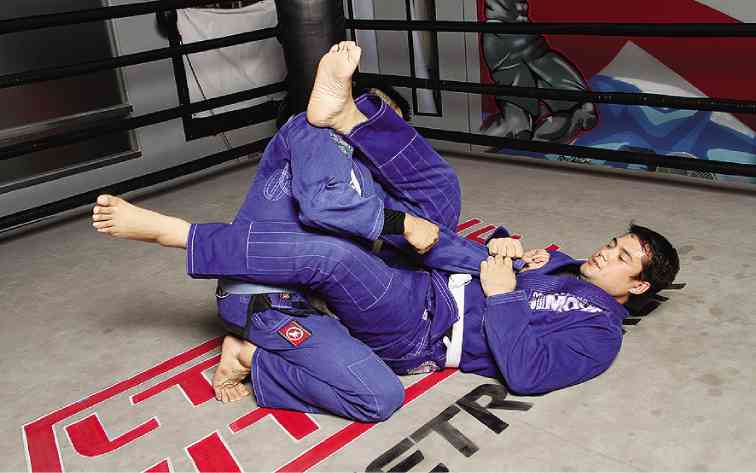 THE SPIDER web position: Guarding or grappling is a key component of jiu jitsu.

Wearing a rash guard, fight shorts, minimally padded gloves and shin guards, actor Geoff Eigenmann is a combatant off-camera. He slips to a crouch to assail his opponent’s arms and legs. He pins his partner’s knees and the latter’s body is caught in a lock.

Mortal combat? No, Eigenmann and his trainer, Mark Ochoa, are demonstrating mixed martial arts (MMA) moves in front of the camera.

Last May, GMA 7 management suspended Eigenmann for being overweight. At 5’8,” he weighed 240 lbs, which made it difficult for him to get cast in teleseryes.

Instead of feeling depressed, the young actor saw it as an opportunity to take a break and attend his youngest brother’s wedding in the States.

Jobless for six months, Eigenmann looked for other things to do. Four months ago, he decided to shed off his excess fat through MMA. After months of intense training at Ultimate Fitness gym and a low-calorie diet, Eigenmann lost 40 lbs. Now he’s in front of the cameras again.

The popularity of the Ultimate Fighting Championship on cable TV has led to an influx of MMA gyms. The New York Times describes mixed martial arts as this generation’s “ultimate measure of manhood, endurance and guts.”

Eigenmann recalls that in childhood, he and his eldest brother Ryan would get into fights. Ryan, six years older and bigger, invariably won. “But between me and AJ, my youngest brother, we’d be even,” he says.

Growing up in Parañaque, he lived close to the boxing gym. Eigenmann started boxing lessons in his teens. When he took up MMA, he learned to be well-rounded in combat sports.

“I needed to get my mind off work and to motivate myself to reach a goal,” he says.

Ultimate Fitness at Metrowalk became his second home. He started with Fighting Form, an intense conditioning class that mimics the movements of mixed martial arts. A 30-minute workout could burn 500 to 800 calories. Eigenmann would take five classes a day and use up as much as 2,500 calories.

He would either skip breakfast or grab an apple before working out, eat a taco for lunch and fruits for dinner.

“All the burning and less eating made me lose weight. When I got hungry, I would eat fruit,” he says.

As his stamina improved, Eigenmann advanced to the  fighters’ training, a practical application of fighting styles that entails a lot of grappling (pinning somebody down or fighting with the opponent between the legs), blows, finishing holds, leg work and, more crucially, mental toughness.

Eigenmann observed that the professional fighters at his gym trained thrice a day for six days a week. “It’s not about people hugging each other,” he says of the sport. “There’s a science to it. The more figures, obstacles to jump over and wrestle with, the more challenging it is. And everything takes a toll on your cardio.”

“Every sport has its strengths,” he adds. “I’ve been a fan of boxing. To get the punches in, you need to be calculating. Add some kicks and you’ve got Muay Thai. Wrestling requires control on the ground where the fighting takes place. You can ground and pound and make it hard (for the opponent) to escape. In jiu jitsu, if you’re not careful, you could break your arm and knee in a lock.”

Ochoa lauds Eigenmann for being a diligent and fast learner.

“Mixed martial arts is hard. You have to learn all the styles. Geoff’s strength is in wrestling. He can shoot away to take someone down. He doesn’t get tired easily because of his regular circuit training,” says the trainer.

At the start, Eigenmann would be exhausted after doing five stations out of the 15 in a circuit. The moves include Thai flips, battling ropes, kettlebell swings, burpees, pull-ups, to name a few. After two months, Eigenmann could accomplish two rounds of 15 stations in 30 minutes. When Ultimate Fitness celebrated its anniversary, the actor did nonstop 50 stations for 50 minutes.

In a violent and intrinsically injurious sport, Eigenmann has had his share of pain and injury, the most serious a cauliflower ear brought about by several blows.

“It was red, full of fluids and blood. I wanted to have it drained, but the fighters advised me to let it subside naturally,” he says.

For six weeks, he tolerated the condition and used ice to soothe it, and it healed naturally.

When Eigenmann got back in shape, the GMA bosses welcomed him back with a smile and cast him in “Adarna,” with Kylie Padilla. But, while sparring with a partner one day, he took a misstep and twisted his ankle. A massage only worsened the swelling. Fortunately, the gruelling taping schedule kept him away from the gym and gave him time to heal.

The ratings of “Adarna” have been slowly on the upswing. Meanwhile, the actor has been guesting in a number of shows to talk about his “makeover.”

Asked about the benefits of MMA, Eigenmann says, “Aside from helping me lose weight and putting me back to work, it allows me to feel confident that I am prepared to protect myself. In the future, I could save the day or someone else’s.”