Kids turn entrepreneurs for a cause | Inquirer Lifestyle 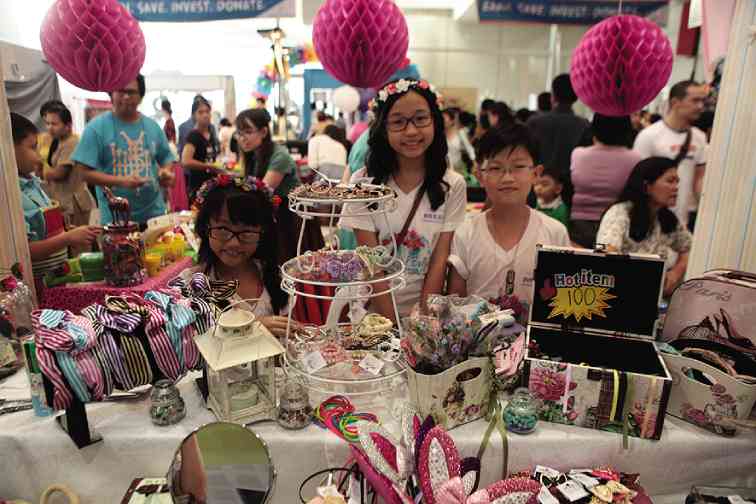 ENCHANTED Belles and their Little Prince

Kids turn entrepreneurs for a cause

Adriana and I arrived in the nick of time to set up her booth for the Kiddopreneur Bazaar. It was a first for both of us.

A few weeks ago, one of my best friends called and offered Adriana the use of her booth. Initially, I declined because I felt I didn’t have the time to help Adriana prepare for it, and I soon forgot about it in the hustle and bustle of relief sales and operations.

As the effect of Supertyphoon “Yolanda” became more apparent to Adriana, she began asking more questions, until she proclaimed that she wanted to give toys and clothes, and asked what else she could give.

“No,” I answered regretfully. “They’ll crumble by the time they arrive in Leyte.”

It was then that I remembered the Kiddopreneur Bazaar.

I discussed the idea with Adriana and asked if she wanted to sell her cookies instead, so she would have money to send the boys and girls who had lost their homes.

When I received the e-mail, I was confused as to why they had allocated two-and-a-half hours for set-up. I assumed that, as a kiddie bazaar, it would resemble something like a quaint farmer’s market, where kids would simply plop their wares on tables.

With this in mind, we prepared a sign, specially designed by Adriana, packed a table cloth and her homemade treats, and made our way.

But, boy! Were we ever (happily) wrong! Far from the simple scene I had envisioned, the participants were even more prepared for this bazaar than the adult shopping bazaars I had been to!

Ordinarily, the vendors I see in bazaars focus only on their products and don’t bother with their booths. However, this was a kiddie bazaar, where children’s imagination and creativity reigned supreme over profits and capital expenses!

A class of their own

There were all kinds of booths. Some were simply decorated, while others were definitely in a class of their own that we hope to one day be able to match!

I was worried that everyone would be selling the same home-baked treats as ours (chocolate-chip cookies and polvoron), but surprisingly, the products were as varied as could be.

There was a butterfly hatching kit being sold by Kiddopreneur founders’ Quinto and Maiki Oreta’s daughter, Brielle. The kit included a cylinder with a caterpillar perched on a stick inside, and with a supply of fresh baging-baging leaves.

Upon purchase, you are to let the caterpillar eat all the leaves it wants, then watch as it spins itself into a pupa and later comes out as a beautiful butterfly in approximately two weeks.

Naturally, the combination of creepy, crawly worm magically turning into a butterfly wonderfully appealed to both boys and girls.

Another big hit was the Juan-preneur Booth being run by the Juan kids. They had their special uniforms, and never got tired of inviting me to try their products every time I passed by. They had drinks and “services” such as having one of them sing, tell a joke, pose or dance for anywhere from P10-P20.

But their biggest hits were their special piggy banks with four individually labelled slots: Save, Invest, Donate and Spend! How cool is that! It was hardly a surprise that these tireless little “Juan-trepreneurs” won the Best Service award!

I wondered why all the little girls were running around like little fairies with flower crowns on their heads. I followed them and found myself in front of the Best Decoration booth of Enchanted Belles, which the name alone gives you an idea what they sold. It was filled with flowery fashion accessories and decorated to match their wares.

Right across our little booth was the Easy Peasy Lemon Squeezy Carnival by Joaquin and Ava Padilla. Their setup was amazing, not to mention their concept!

Rather than sell products, they had a game booth where kids (and parents) could try to throw a stuffed toy through a hole and into a small tub.

If you could get the stuffed toy through the hole twice, you won a prize. Even if you didn’t win, you would walk away with consolation prize. Nine-year-old Joaquin, dressed in circus master’s attire complete with a moustache, did a great job of selling “three tries” for P50 or “eight tries” for P100 all afternoon, as they never ran out of eager customers.

I chatted with their mom, my friend, Angela Padilla, about her children’s booth and what inspired her to get her children involved in the Kiddopreneur (it was their third year).

“My husband Jay and I operate our own businesses, and we felt that that the bazaar would be a creative and fun introduction to business for Joaquin (then 7 years old) and Ava (then 3 years old),” she said.

“In 2011 we started with rainbow cupcakes, first-aid kits and poster prints. The kids were exhausted but they got to experience pitching their products, talking to new faces and giving change. We continued on with art supplies and bughouses— wanting to distinguish and offer unique items that Joaquin and Ava picked, and thinking that if our kids wanted them, other kids would, too. We also offered free gumballs with each purchase.

“With each succeeding event, we saw that the kids have more enthusiasm and have gained confidence in speaking out to potential customers. It was such a nice surprise to see Joaquin volunteer for the first time to go on stage and advertise the booth and answer Tita Maiki’s questions.”

Ava was busy helping her brother, too, and when I asked what she would do with all the money they were making, she quickly answered, “I’m going to give all our money to the less fortunate who lost their homes in the typhoon.”

As Adriana and I buckled down to business, I never expected we would enjoy it so much. I was especially happy to see my daughter come out of her shell as the day progressed.

In the beginning, she hid behind the table and had to be coaxed to talk to her “customers,” but as she watched the other children boldly walking around and inviting people to their stalls, she began to stand outside her table, too, and offer free tastes of her chocolate-chip cookies.

When people asked if she baked them, she shyly nodded her head, but I could see the smile of pride on her face, especially when they told her it was delicious. When people bought from her, she excitedly grabbed the containers and gave them away, usually forgetting to charge them. Fortunately, all her customers were quick to remind her to get the money.

We were also happy to spend the day getting to know our “neighbors” and supporting each other’s booths.

To our left were the Sieh sisters—Isabel, Mia and Stella—with their parents, Stephen and Ronna. They were selling Christmas cards and wrapping paper, which were perfect for the parents who were there to buy Christmas gifts.

It was their second time to join the bazaar, and Ronna says they joined again because “it really sparked something in my girls. When we got home last year, I was exhausted from standing all day, but they wanted to know when the next will be held. On their own, they just sell to family and friends; in the bazaar, however, they really sell to other people, they become more outgoing.”

I asked the girls what they liked about the bazaar, and Stella answered, “It’s fun to work with my family because if I don’t know what to choose, my sisters help me!”

Isabel said, “I am more comfortable here because I don’t have to sell in front of big people.”

Aside from self-confidence, I could see that the kids were also learning about saving and selfcontrol. Isabel talked about “all the times when I want something, but I had already used all my money, so I think of saving it so I can buy something more spectacular!”

To our right was the LDL Pop Up Agency, which was actually an added service provided by the organizers for the participants. For a very affordable and minimal fee (which also went to the Red Cross), Theresa Leung, Claudine De Leon, Noelle Hilario and Lou created cool customized designs and logos for the kiddiepreneurs’ budding brands to help the kids professionalize their businesses.

Five-and-a-half hours and 35 dozen cookies later, it was time to call it a day. There was a closing program and an awarding ceremony for the most successful booth, B Kids Company for a Cause, which—surprise, surprise!—had a closing sales tally of P255,867!

The booth sold bottles of the ever popular cookie butter spread, Human Nature products and iPhones. They also sold iPhone chargers, which, given how long many of the parents were there for, were sold out by the end of the day.

The three Yusay siblings— Miguel, 14 years old; Andrea, 10; and Jaime, 8—went up on stage to claim their trophy; I was touched when Miguel asked for a moment of silence for the victims of Yolanda, and for the survivors whom they were giving all their sales to.

I caught up with the family later and discovered it wasn’t their first time to join. Their mom and dad, Leny and Gerard, were prepared for the stiff competition and had special shirts made for the family to set them apart, while the kids made sure to research what items would be a hit on the market.

Andrea was all smiles as she said, “I like starting my own business because I get to choose prices for my products, what to sell and how I will sell them.”

Miguel explained the decision behind their generous gesture. “When we saw Yolanda on the news, we knew we had to give. Even if so many others are already giving, we have to do what we can to help, as well.”

We went home, exhausted from the preparations the day before and the day’s activities, but excited for the future.

Seeing this new batch of enterprising children with such big and generous hearts assures me that our country is going to be in great hands when the next generation takes over.