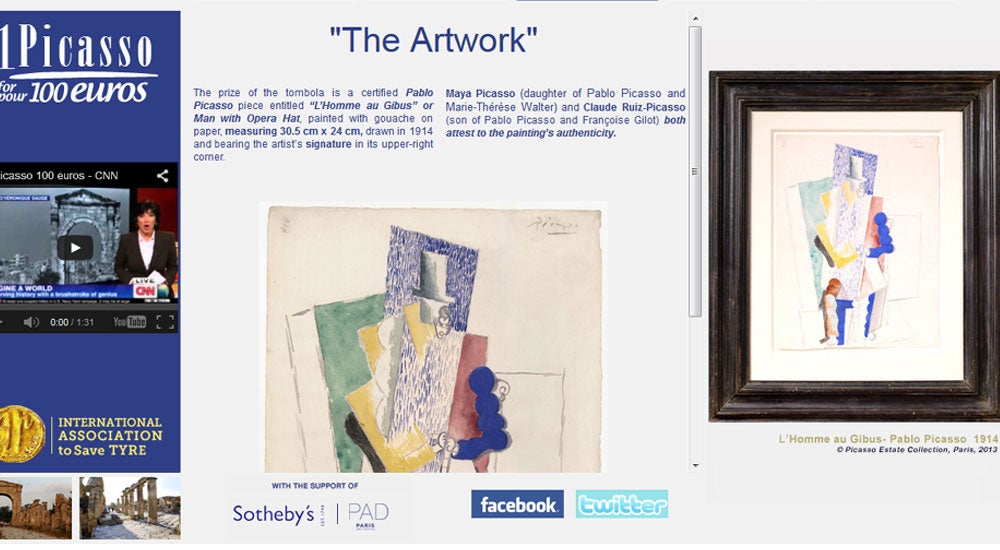 NEW YORK, United States – Still stumped for a Christmas present? Then what about an exquisite $1 million Picasso for the living room, yours for just $135 at an online charity raffle.

The perfectly preserved Cubist gouache was bought by an anonymous donor from a New York gallery and given to a charity working to save the ancient city of Tyre in southern Lebanon.

The UNESCO-registered charity has issued 50,000 tickets at 100 euros ($135) each for the first-of-its-kind tombola on December 18 at Sotheby’s in Paris, hoping to raise $5 million.

It wants the money to develop a traditional handicraft village giving young people, women and the disabled jobs in Tyre and to set up an institute for Phoenician studies in Beirut.

Hopefuls have snapped up 40,000 tickets already and Olivier Picasso, Pablo’s grandson, is in New York to drum up interest in the remaining 10,000.

“The first one will be to help a really interesting project and the second one is, hey, maybe to get a Picasso on your wall.”

People from all over the world have gone online to buy just one or a handful of tickets at www.1picasso100euros.com.

Picasso is almost as famous for his chronic infidelities and succession of beautiful muses as for the genius of his work that makes his masterpieces some of the most expensive on the planet.

Although Olivier never met his grandfather, he has written books about the life of the 20th century art genius and is convinced that Picasso would have approved of the pre-Christmas tombola.

“In many ways he was excited about exploration, so for sure being the first one to be in a raffle would be exciting but more seriously he was really concerned by other people’s problems.

“In the ’50s for example he was receiving something like 100 requests per day for money, for participations, for a gift and I’ve been told most of the requests were answered,” he said.

Olivier, who says he has many Picassos of his own, described the signed “L’Homme au Gibus” or “Man in the Opera Hat,” painted in 1914, as a “masterpiece” of museum standard in perfect condition.

The International Association to Save Tyre (AIST) says it is the first time that a top-level piece of art has ever been raffled.

Their publicity drive began in Paris, moved to London and is finishing in New York. The website functions in Arabic, English, French and Russian to widen the net of potential buyers.

“Your chances of winning that Picasso are a lot higher than if it was a lottery of New York where you have open-ended tickets,” Reem Chalabi, AIST project coordinator, told AFP.