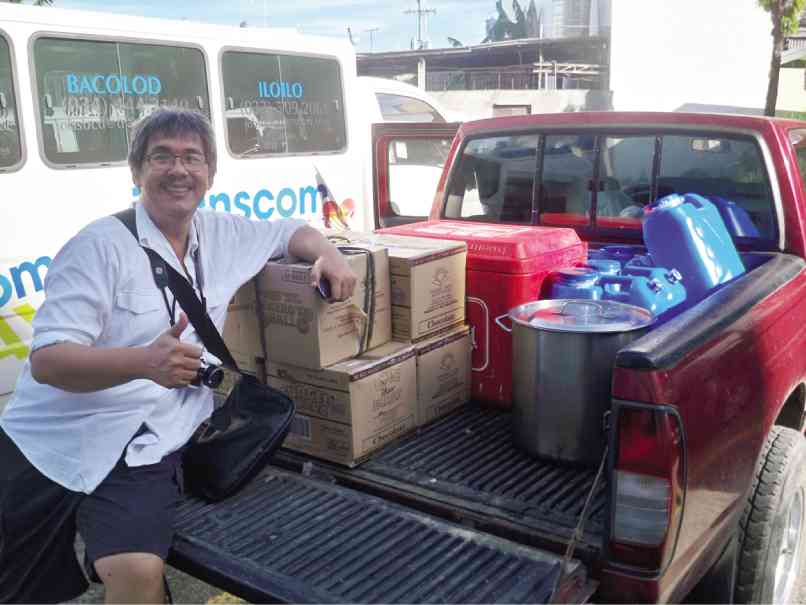 Iloilo has always been a foodie’s paradise. If you wish to warm your tummy with an early breakfast treat, there’s freshly cooked pancit molo at the house of Kapitan Ising, with its kaldero-ful (cooking pot) of peppery broth with freshly wrapped pork molo, for only P300 good for 10-15 people, paired with toasted bread from the century-old Panaderia de Molo (Avanceña Street).

Amigo Terrace Hotel in Iloilo City, was a food tour on the last day.

However, what was supposed to be an extensive, memorable food tour for the competition judges and media became instead an outreach feeding program for victims of Supertyphoon “Yolanda,” which also hit the northern part of Iloilo, particularly Estancia and Concepcion.

Tabu-an organizer chef Rafael “Tibong” Jardeleza II felt it was more appropriate to extend help to those in need by feeding at least one affected barangay.

Iloilo City was largely spared the wrath of “Yolanda,” but not northern Iloilo. About 200-plus casualties were recorded in the northern area with about 180,000 families affected.

“This is probably the reason God spared the city from destruction,” said Iloilo City Mayor Jed Patrick Mabilog. “Because if we were to be devastated, we would not be able to help and reach out to our fellow Ilonggos. We would be like Tacloban and Ormoc City, totally helpless.”

The city has canceled its yearly Christmas party and will, instead, use the allocated budget to buy fishing boats for Estancia.

Jardeleza tapped Rancho Gloria, an inland resort in Concepcion, as the feeding venue. It’s a three-hour drive from the city. Rancho Gloria is owned by Boy and Ruth Jarantilla.

Jardeleza also asked the assistance of Happy Kitchen, Lagaw sa Isla, Smart and Water Quest to sponsor the food, which consisted of cooked rice, fried luncheon meat and hot soup with pork, cabbage and squid balls. About 250 persons were to be fed in Sitio Belen,

Food writer and book author Angelo Fuentes Comsti also brought several boxes of Fudgee Bars and Tiger Biscuits for the victims all the way from Manila.

“I wanted to reach out right away when the storm struck,” said Jardeleza. “But I was so busy with Tabu-an competition. This is my only time to see my fellow Ilonggos. My heart goes out to them.”

On the way to Concepcion, one could immediately see the damage to the province starting from Brgy. Barrido. All around were fallen trees, toppled power lines and debris from wrecked houses and schools. The powerful winds uprooted mahogany trees and ripped roofs off of houses. Coconut trees and banana plants still littered the side of the highway.

Children as young as a year old lined up to get their hot meal together with their parents, some of whom carried infants under the midday sun. Each of them graciously said thank you upon receiving the food. Water and tetra pack juices were also given to them.

Lorna Cubita, 31, brought her three kids. She said their house, made of bamboo, was completely destroyed. They are currently housed at Calamigan Elementary School, which was made into an evacuation center.

“Nothing was left to us,” said Cubita in Ilonggo. “But, I am happy my family is safe and we are still together.”

Unconsumed goods were turned over to the Concepcion municipal hall, where more people were temporarily staying.

“It’s so fulfilling to help and make people smile even though you know they’re still struggling with their life and livelihood,” said Jardeleza.