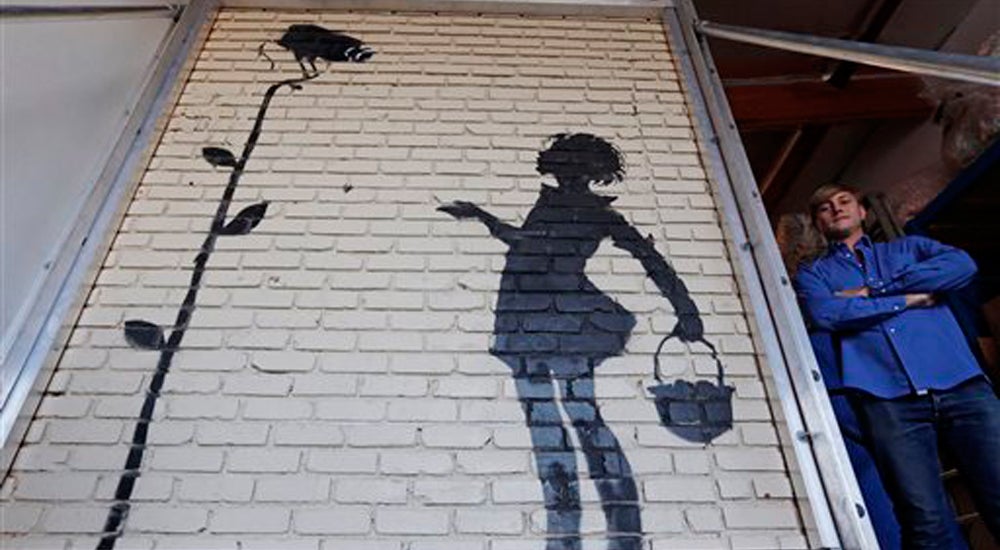 Michael Doyle, street art director for Julien's Auctions, stands next to "Flower Girl," a delicate stencil on a massive brick wall by popular street artist Banksy, is displayed in a warehouse in the greater Los Angeles area Wednesday, Dec. 4, 2013. AP

Big Banksy piece from gas station up for auction

BEVERLY HILLS, California — Eytan Rosenberg had no idea that the man he let paint a mural on the side his family’s gas station in Hollywood was the darling of the art world.

Rosenberg had never even heard of Banksy, when the elusive British street artist stenciled “Flower Girl” on the brick wall of the station in 2008.

“He introduced himself, I shook his hand,” Rosenberg recalled. “I was busy, didn’t really take much more time, went back to work.”

Now, the 9-by-8 foot (2-by-2.4 meter) artwork depicting a young girl with a basket of flowers and a security camera perching over her like a vulture is set to go on the auction block, and auctioneer Michael Doyle says it could fetch as much as $300,000 on Thursday at Julien’s Auctions in Beverly Hills.

It will be one of five auctioned pieces that Banksy created on plywood and concrete walls and doors in Berlin and London.

The works by the provocative artist who shuns the spotlight were on display this week alongside stage costumes worn by famous rockers at the gallery that specializes in celebrity memorabilia.

Rosenberg is now well aware of the reputation of Banksy. When he sold the gas station last year, he painstakingly removed the artwork and installed it in a sturdy aluminum frame.

He joked during a recent interview that the stencil was almost gone just a few days after it was finished.

He said one of his employees called to say the station had been tagged with graffiti and Rosenberg told him to paint over it immediately. Then Rosenberg recalled the conversation with a friend of a friend — the Brit who wanted to paint his wall.

“So I called him back and said, don’t touch it!” Rosenberg said of the employee. “It almost got painted over. I ran down to the station. Before I even got there, there had to have been 50 people taking pictures of this thing.”

Rosenberg had dozens of security cameras aimed at his family’s gas station, but the tape was mysteriously blank when Banksy was working.

The surveillance cameras were “just one of those things that you gotta do, because you never know what’s going to happen,” Rosenberg said. “And when it did happen, the cameras didn’t work. I find that ironic.”

Banksy, who refuses to reveal his full identity, began his career spray-painting buildings in Bristol, England. He’s known for his silhouetted figures and spray-painted messages.

The other pieces being auctioned were created from 2002 to 2004, when few people had heard of Banksy’s witty, anti-capitalist, controversial work. Then came the “Exit through the Gift Shop” documentary in 2010.

“All of a sudden that really put him on the map. And he’s still reusing these images,” said Michael Doyle, consignment manager at Julien’s Auctions.

Banksy’s work has caught the eye of A-list Hollywood celebrities such as Brad Pitt and Angelina Jolie, who recently bought a smaller Banksy piece for $1 million.

Rosenberg took great pains to preserve “Flower Girl” — no small feat given that it’s painted on a 15-inch thick wall.

He consulted experts and fashioned the aluminum frame that can be hung — if the person who buys it has a building sturdy enough.

Rosenberg still marvels at his good fortune to find himself the owner of a coveted piece of art.

“It was a gift from God,” he said with a laugh.