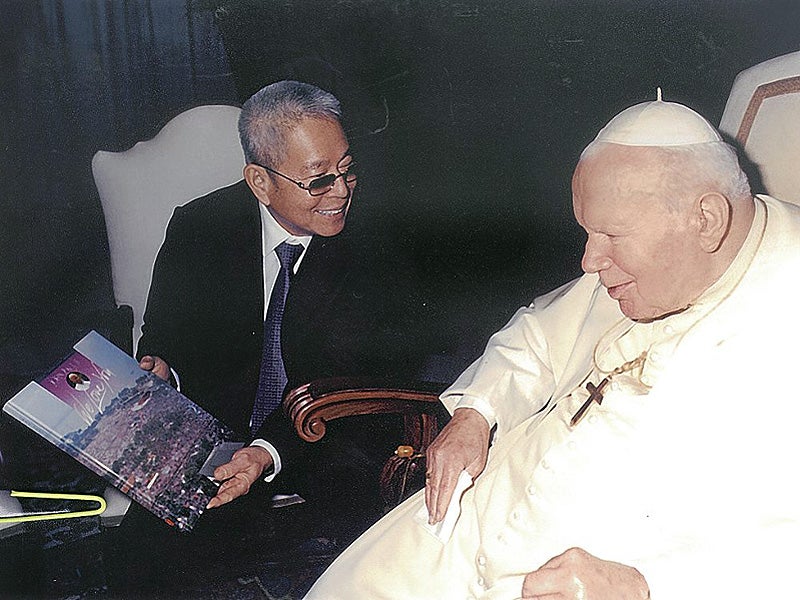 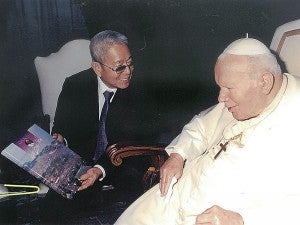 The homilies given by Blessed John Paul II during his visit to Manila on Jan. 12-16, 1995, for World Youth Day are printed in full text in the coffee-table book “We Love You, John Paul II,” published by Reyes Publishing Inc. through a generous grant from Prudentialife Group. Given at the different Masses scheduled for the Pope’s visit, the homilies and speeches can be used as points for reflection.

Homer Blanco, consultant of Prudentialife for corporate communications, recalls those days when an estimated five million people assembled at Luneta Park. With one voice they cried, “John Paul II, we love you.” And he answered, “John Paul II loves you, too.”

Later, the Holy Father said on the day he left Manila for Rome (Jan. 16, 1995), “I take with me a thousand images of the Filipino people.”

Two months before Pope John Paul II died on April 2, 2005, Aurora “Rorot” Lazo of SM Lazo Medical Center, recalls she and her children were standing on St. Peter’s Square in Rome when the bells started ringing. This was a signal the Pope would come out to bless the people from his window. But it was not a Wednesday and there were only at least 27 people in the square.

Looking up, the people saw the Pope emerge to bless them.

“Papa! Papa!,” people started to chant. What a blessing! Manang Rorot had tears in her eyes when she told me this story.

The Franciscan Missionaries of Mary (FMM) marked their 100 years of presence in the Philippines by launching the coffee-table book “A Flame of Fire” yesterday,
3 p.m., with a Mass at Stella Maris College Chapel on Cambridge St., Cubao, Quezon City. The book features the paintings of the late Sr. Elisea Quinto, FMM. To order the book, call Stella Maris College. 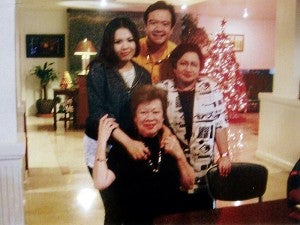 The Filipino Ancestry International (FAI) Dance Troupe of Kitsup County, Washington State, USA, has invited the Ambassadors of Light (AOL), headed by Anderson Go and Pinoy Dream Academy champion and Backroom talent Laarni Lozada, to perform in November as a highlight of the 15th founding anniversary and the first death anniversary of its founder Adriano Austria. But there will be a cultural presentation first in Seattle on May 28.

Invited to the May 28 celebration are Geraldine Osias of Gnosis International Center and Sonia L. Atabug, PR director of Philippine Women’s University. Both are board members of the Ambassadors of Light Foundation composed of “unsighted” young singers.

The invitation was extended by Celia Tibayan-Austria, widow of founder Adriano Austria and an educator from PWU and former member of Philippine Bayanihan Dance Company. The couple, through FAI, has promoted and preserved Filipino heritage in songs and dances, education, community service and values formation.

Art at the NY Philippine Center

Approximately 100 paintings have been donated to the Philippine Center in New York by Filipino artists who have exhibited their works.

Artists who had exhibited in New York had a reunion at the exhibit opening of New York-based artist Art Zamora at Art Center of SM Megamall. Present were Manny Gamboa, Al Perez, Jonathan Salvoza, Edgar Doctor, Lenore Lim and Imelda Cajipe, among others. Exhibit ends May 29.

Vicky Wieneke, president of Kabisig sa Kalahi which has been feeding thousands of malnourished children since 2001, is informing readers that SM Kultura is holding a Craft for a Cause anniversary event at 2/F SM Makati May 31, 10:30 a.m. Many livelihood products will be available. Let us give our support and buy their products. May 31 is the feast of Our Lady of the Visitation.

Happy feast day to Sta. Rita de Cascia today. Well-known fashion designer Oskar Peralta will once again decorate with red roses the carroza of the saint for the procession after the 5:30 p.m. Mass. He has been doing this since 1967.