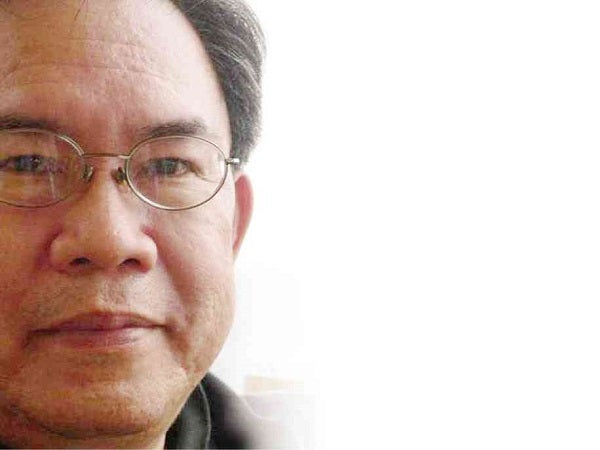 Author of two novels (and a third being written), master of the short story in English (three collections), biographer, literature professor and newspaper columnist, José “Butch” Dalisay Jr. has likewise written and produced some 12 plays from 1970 to 1994 (also published in three collections).

The author being a onetime activist, the plays largely examined sociopolitical issues during that critical period. The last two were “Mac Malicsi: TNT” and “Ang Butihing Babae ng Timog” (1994).

And then, that was it. The dramatist bade goodbye to the theater.

“Few people would remember but I actually started out as a playwright in Filipino before I shifted to writing fiction in English,” recalls Dalisay. “I trained with Peta (Philippine Educational Theater Association)—thanks to Lorli Villanueva, our dramatics teacher—as a Philippine Science High School senior in 1970.”

That year, he sold his first teleplay to “Balintataw.” It was produced with Joe Gruta, Angie Ferro and a very young Roderick Paulate in the cast. This led to more plays for Peta and the Cultural Center of the Philippines, and screenplays for Lino Brocka, then making waves as a film director.

Dalisay was then working with the National Economic and Development Authority, and one of his officemates and close friends was the noted playwright Bienvenido “Boy” Noriega Jr., with whom he enjoyed “a very active but amiable” rivalry in writing for the theater.

They enjoyed joining all the playwriting contests together, and often both won, but Noriega received more prizes. Finally, Dalisay gave up and turned to fiction in English, where he knew he would be “safe” from his colleague.

“Happily, that seems to have worked out,” says Dalisay. “Altough Boy later threatened to write a novel in English and was even briefly enrolled in UP’s PhD English program. Very sadly, he died before he could work on his novel.”

Dalisay took graduate studies in the United States and, upon his return, continued to write plays for Gantimpala Theater and Dulaang UP, and screenplays for directors like Laurice Guillen, Marilou Diaz Abaya and Gil Portes.

“I suppose the transition from stage was inevitable,” he muses. “Theater was much more fun—I never really enjoyed writing for the movies, although it was a great privilege to work with such fine directors. But screenwriting paid my bills (If I got paid at all, because sometimes I didn’t, in those pre-contract days). And then the fiction and the nonfiction took over.”

The versatile and prolific writer admits to being “woefully out of touch” with theater today. It’s poker for him, or an action and science-fiction movie with wife Beng. He is busy with his writing projects and with teaching, “so I need all the relief and relaxation I can get, which theater as I knew it wasn’t much good for.”

Nevertheless, writing for the theater has had an impact on him. “I still impress the importance of a background in theater upon my fiction writing students in UP (University of the Philippines),” he says. “Playwriting teaches dramatic economy, it teaches you to think dramatically and visually as a fictionist. You know better how to set up scenes, when to make characters speak or how to make them say things nonverbally, how to use props, and so on.”

“I feel proud to have been part of a generation of playwrights that included, aside from Boy Noriega, people like Paul Dumol, Boni Ilagan, Reuel Aguila and Ed Maranan (René Villanueva, I think, came slightly later),” says Dalisay. “I’m sure the new young playwrights today are doing interesting work, and one of these days I’ll take a break from poker and walk quietly into a theater to see what’s going on.”