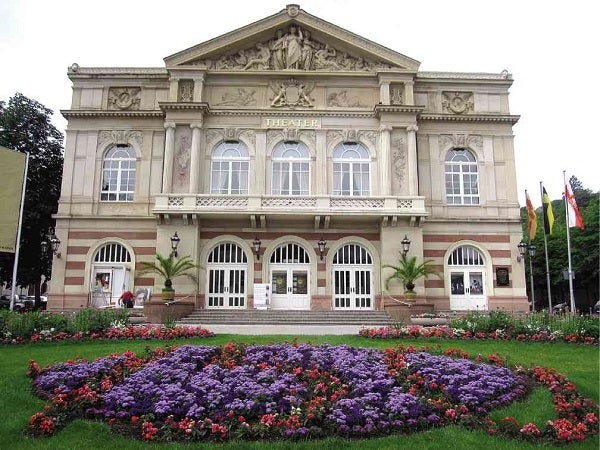 Baden-Baden was a destination waiting to happen again. An earlier visit impressed a charm and agreeable experiences which begged a return. So it was that the promise I made to myself to go there again with my hubby Chito brought us back to the stylish spa city at the foot of Germany’s Black Forest.

The agenda this time was to savor more deeply remembered pleasures and share these with my best travel companion. Vicky Schmidt was the impresario for both visits. The former Mary Victoria Javier has been a longtime resident of Germany and maintains several homes in the central European country, one of which is in this southwestern countryside. She sent Herr Valla, the same chauffeur who picked us up four years ago at the Frankfurt airport. He was waiting at the exit gate and quickly loaded the luggage into the back of the G-class SUV.

It was a restful two-hour drive before we reached the Atlantic Parkhotel in Goetheplatz 3. The classical colonial-styled hotel was chosen for its location right in the heart of Baden-Baden. It was our residence for the duration of our stay. Favorite and only daughter Mica shared the commodious suite with us which looked out to the conservatory, a recommended dining outlet for traditional German fare.

It was sweater weather when we walked out into a pleasant morning. An open horse-drawn carriage was parked on the curbside, but walking the streets was the better way to become familiar with the vicinity. Vicky arrived shortly after we checked in and had cleared her schedule to be with us all throughout. We strolled through the idyllic setting of what had once been the summer capital of Europe, a playground of royalty and aristocracy.

Artists, too, were among the famous visitors, counting Liszt, Brahms, Courbet, Dostoevsky and Gogol among the luminaries of music, art and literature who were attracted to this city in the heart of the Upper Rhine Valley

Belle epoch reflected on the façade of the Theater Baden-Baden which stood across our hotel. Art and culture were preoccupations of the 19th-century nobility when they converged in these parts. Leisure was and continues to be a large part of what brings visitors who come for the annual races at the most exclusive Baden-Baden Racing or to the opulent Casino, where compliance with the dress code is required before being allowed to the gaming floor. Gentlemen are required to don a coat and tie and women to be dressed in similarly appropriate attire. The 19th-century establishment, which Marlene Dietrich declared the most beautiful casino in all the world, became material for Dostoevsky’s short novel, “The Gambler.”

It was reputed that Baden-Baden had the highest concentration of German millionaires in the country. The environs said as much. There was an arcade of specialty shops patronized by the locals. One sold only salts from different parts of the world that came in a variety of colors. Another offered confectionaries which the kindly proprietors offered, a sampling of the sweets displayed in glass jars. There was a store with an extensive selection of olive oils doing brisk business. Other establishments carried home design accents, art pieces and apparel. The colonnade lined both sides of a garden where chairs and tables with umbrellas provided one a place to read or have a cup of coffee under the trees.

A little farther along was the Kurhaus, the elegant white building which housed the Casino, as well as a restaurant. It had been designed after the Paris Opera House and was the centerpiece fronting the Kurhaus Garden. Occasionally, a philharmonic orchestra performs and transforms the outdoors into a concert hall.

Canopies are set up in the summer months where patrons can dine alfresco. As evening approaches, a gas lamp lighter carries on a long-standing tradition, illuminating the street like it had always been done as far as residents’ recollections go.

The stroll continued toward Trinkhalle, a handsome building along the lines of neoclassical architecture. This is a portico, constructed in 1839, which stretches a length of 90 meters with frescos painted on the walls. Benches lining the arcade invite a pause to appreciate the murals portraying local legends. Inside the pump room, mineral water linked to the Friedrichsbad spring gushes from a faucet free for the taking. It is said to be curative and an elixir for youth.

Bathing by the ruins

Baden-Baden is a spa town, known for its healing waters. Once the summer capital of Europe, royalty and aristocracy traveled here to immerse in the hot springs.

Vicky took it upon herself to arrange an experience as theirs, which we might never have ventured to try. Shortly after we had a dinner of German specialities, she handed us premium passes to the Freidrichsbad bathhouse for the following day. Trepidations over the prospect of taking a bath in public au naturel were overtaken by the arrangements she had already made.

Partially in dread, we made our way the next morning to the landmark at the foot of the Alstadt known as the temple to the art of bathing. The Roman-Irish bath tradition is enshrined in a neoclassical building where natural thermal streams surface from 6,500 feet below. It was built in 1877 beside the ruins of the Roman baths, and has been patronized for over 125 years for the waters rich in beneficial minerals.

Getting to know my toes

Progression through 17 stages after disrobing included showers, scrubs, massage, steam baths, pools and whirl pools. Gratefully, there were separate entrances for men and women. It became occasion to observe toes, walls and the magnificent dome overhead.

While areas are common to both, having arrived early gained some element of privacy, encountering no one except the masseuses who matter-of-factly rubbed soapy brushes all over bare skin. What normally took four hours, if the prescribed time for each chamber was followed, was compressed into a little over an hour. We sat drinking tea in thick white towels, feeling refreshed and relieved at not having seen a single person. People were signing in at the reception by the time we left.

The rest of our stay included a show at the Festspielhaus, which is the second largest opera house in Europe; champagne at the stately Brenner’s Park; shopping in the charming town center; a trip to the Rose Garden and a shrine by a vineyard.

We had several lovely meals in out-of-the-way places and it was an altogether memorable visit. It was, however, the morning at the baths which made Baden-Baden different from any of the places we had ever been to date.