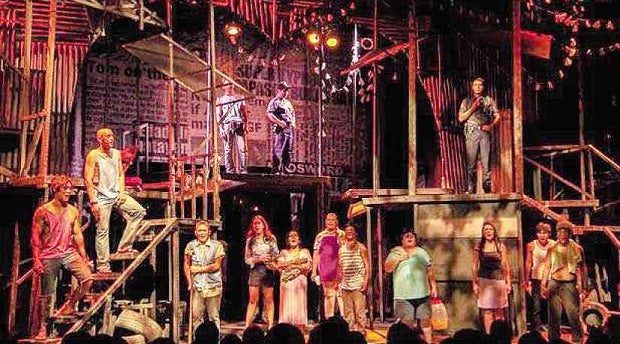 ‘Maxie The Musicale’ –long and loud, but heartwarming

In Bit by Bit Company’s “Maxie The Musicale,” the irrepressibly ebullient Jayvhot Galang as Maxie and the impossibly handsome Jojo Riguerra as Victor, the policeman that Maxie has a crush on, cut striking, beautiful figures on stage.

Based on the 2005 film “Ang Pagdadalaga ni Maximo Oliveros,” written by Michiko Yamamoto and directed by Auraeus Solito, the adaptation by Nicolas Pichay follows protagonist Maximo Oliveros, a bubbly tween who knows what he wants and finds ways to get it.

Unfortunately, the musical he inhabits doesn’t really quite know what it wants to be just yet. Like a hot mess of a tranny with too many feathers and ribbons, the self-indulgent staging is overly long and overly loud.

Too bad, because the musical is a loving, heartwarming coming-of-age tale that struggles to break out of a closet whose door is blocked by bells, whistles, smoke, mirrors and the proverbial kitchen sink.

The production doesn’t know if it wants to be a musical, a statement on low-income communities, a Sto. Niño procession, a gay beauty pageant, a funeral procession, or a repository for numbers seemingly inspired by foreign musicals like the pick-pocketing song from “Oliver!,” the stripping security guards (showering policemen in this case) from “The Full Monty,” the riot police (complete with the transparent shields) from “Billy Elliot,” and the barricade scene from “Les Miserables.”

To be fair, songs that don’t really push the story along are par for the course in musicals (after all, the most famous song out of “Hello, Dolly” is a bunch of waiters welcoming their favorite patron to a club). Nonetheless, while the scenes listed above are clearly intended to add color and fun to the proceedings, they suffer from being overly directed (let’s bring down the coffin from the second floor!) and overly featured (let’s devote a whole 15 minutes for the pageant!).

Because of, or in spite of, having three composers (William Elvin Manzano, Janine Santos and JJ Pimpinio), and even with a variety of genres (ballad, rap, R&B, etc.) employed, the songs feel tiresome because there is no particularly striking melody. They all start to sound alike after a while, and each one seems to go on forever and ever.

Also, the faulty sound system (inexcusable on the second week of a production’s run; of a musical, no less) blasts the live band’s music, drowning out all of librettist Pichay’s lyrics whenever the ensemble sings together.

This is a great way to tell us that Maxie’s sense of self is intertwined with where he lives and who has been raising him. We’re the Sampaloc community, we’re loud and proud, get used to it.

But, boy, does director Dexter Santos want to make sure we really and truly get it. On top of the flawed sound system, he has all his actors sing and talk at the top of their lungs for every single song and every single scene.

When Greg de Leon sings as the antagonist police chief, his solid baritone bellows above everyone else’s voices. Is everyone in the cast competing for the Philippines’ Next Top Loudest Singer (or maybe they can’t hear themselves over the sound system)?

Running at three hours, the production even has a recap of Acts 1 and 2. Clearly, it knows how long it’s taking and is afraid it’s lost the audience’s attention along the way. Thankfully, despite the bloated length, the main plot is strong enough to withstand the extraneous devices.

The sound system lets up during duets and solos, allowing audiences to hear Galang’s deft vocal maneuverings. While he lacks technique for some songs requiring a falsetto, his trailing curlicues and soulful delivery are great, while his torch songs and finale anthem are highlights.

How does a boy from a family of petty thieves and a policeman who’s bent on clearing the streets forge a connection? Friends and family knock sense into Maxie as he turns difficult but crucial corners.

Aaron Ching stands out in Maxie’s barkada-as-Greek-chorus. Maxie is also given a frenemy-turned-friend, though he’s completely superfluous.

The strong performances and singing are the heart of the show. Roeder Camañag (Nazer Salcedo, alternate) as the father provides gravitas. As the brothers, Jay Gonzaga is funny and OJ Mariano (Al Gatmaitan, alternate) is tender.

It is in the intimate, vulnerable moments with his family that Maxie knows of true security and unconditional love. The four actors in this family express genuine affection for each other and anchor the show, allowing audiences to cheer for underpuppy Maxie through his trials as a brave tween, and his blossoming into a fabulous teenager.