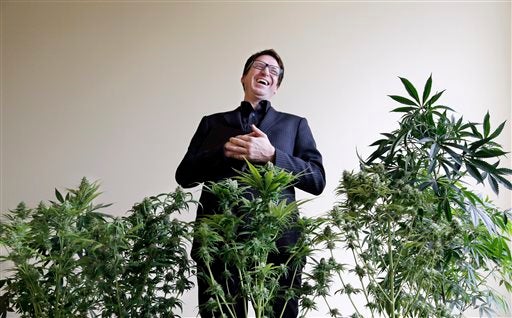 Daniel Curylo laughs while posing with some of the marijuana plants that he uses for marketing purposes in Seattle on Wednesday, Nov. 13, 2013. If legal pot is the Green Rush, Curylo has some unique credentials: He’s been an actual prospector. AP

SEATTLE  — The first anniversary of Washington state’s law permitting legal marijuana use was being celebrated Friday by hundreds of people lighting up beneath the Space Needle, Seattle’s iconic landmark structure.

Almost a thousand people were permitted by the city of Seattle to attend the free event at Seattle Center, an arts and entertainment district surrounding the Space Needle.

Last autumn, voters in Washington state approved legal use of recreational marijuana, making the state, along with Colorado, one of the first two in the U.S. to allow the sale of it to adults over the age of 21 at state-licensed stores.

By coincidence, Seattle rock band Pearl Jam was staging a concert near the celebration Friday night that marked the end of its North America tour.
RELATED STORIES:

Celebrations as US state legalizes marijuana

Some US police dogs not smelling marijuana anymore

Regulate Pot? Uruguay’s been there, with whisky

Obama will not go after states where pot is legal