From Russia, with love–and feathers and sequins | Lifestyle.INQ ❮ ❯ 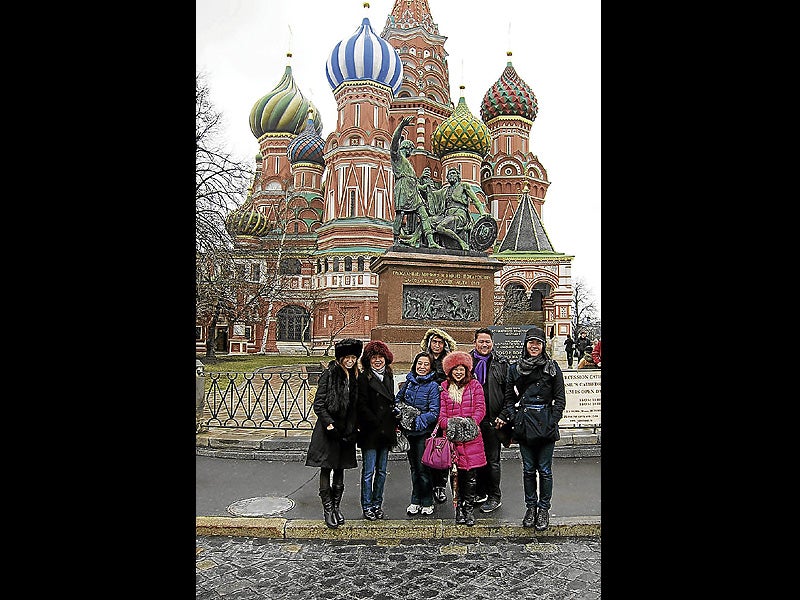 Ready to travel to luxuriously opulent and astoundingly beautiful Russia? First, brush up on the fascinating history of that exotic and faraway land.

Our intro to the country was via Aeroflot, Russia’s national airline. To our delight, our flight left on time and had stewardesses who could have passed for models. (Good tip: Instead of paying per kilo for overweight luggage, just pay an additional luggage fee. Aeroflot has a Manila office, tel. 7592191.)

Moscow is the first stop for almost all tourists in Russia. The city is one photo-op after another, from the Kremlin to Red Square. Fave designer Rajo Laurel has so many photos in his blog in Stylebible.ph.

We were extremely lucky that the day we arrived was also the birthday celebration of Philippine Ambassador Victor Garcia III. His bubbly wife Connie had prepared a Filipino feast and a dance presentation with the rest of the ladies of the diplomatic circle.

Consul Tonette Mendoza-Oblena turned out to be the younger sister of fellow triathlete Ichay Mendoza Bulaong. Tonette and her husband Dinno have been with the DFA for years. Embassy staff Eduardo Manayao arranged for his cool daughters Kim and Av to tour us around over the next few days.

While shopping is by no means one of the main attractions in Moscow, we Pinoys love shopping, so they suggested Russian souvenirs at Vernisazh Market at the Izmaylovsky Park. It’s a Wednesday-and-weekends flea market where you can haggle the final price.

With much better weather the next day, we reached Red Square and marveled at its beauty. After countless photos, we toured the Kremlin and surrounding sites. We ended the day shopping at GUM, the main universal shopping mall that is adjacent to the Red Square.

One of the most surprising, excellent tours is the Moscow metro or subway. Outstanding Soviet architects designed grand train stations that look like palaces. Among them was Alexey Shchusev, who also designed the Lenin Mausoleum. It’s true that there are chandeliers and a whole lot more art in the Russian metro.

If you have time, include St. Petersburg in your Russian itinerary. Known as “the Venice of the North,” the city was built by Peter the Great in the 1700s, as he was inspired by the more advanced cities of Europe. St. Petersburg is truly one of the most romantic cities I have seen with its countless bridges, canals, monuments and cathedrals.

As beautiful as it seems to wander around the city on your own, it’s best to get a guide because there is a language barrier and the signs are in Cyrillic script that uses different characters.

Indefatigable Malu G found our Russian guide Olga at www.olgatourguidepetersburg.com. She got us “express” tickets to all the worthy museums, and rare ballet tickets, but best of all, her encyclopedic brain helped us keep our Catherines and Nicholases straight.

We splurged and stayed at the Grand Hotel Europe, renowned for its Old World charm, premier location and modern amenities. Our original plan of ordering Beluga caviar was immediately nixed when we saw too many zeroes in the price. So we settled on Beluga Vodka instead and drank it like the locals do, ice-cold and neat.

Pinoys are everywhere. During Olga’s guided tour of the Hermitage Museum, we had sightings of a sea of Pinoys also touring. They were all part of the Sunlife Insurance incentive travel.

Olga wondered if they are all relatives or just wanted a photo with our group since we had actor Victor Basa with us. As our group walked through halls of Picassos, Gauguins, Monets and works of the world’s greatest artists, we had an idea of how lavishly the tsars had lived.

One surprise to me was how many churches there are in Russia. The best is the Church of the Spilled Blood, built as a memorial on the spot where Alexander II was assassinated in 1881. This Byzantine-style cathedral is the grandest in all St. Petersburg, and Twitter-happy Rosan Cruz took a ton of photos.

A favorite spot was the Yusupov Palace, formerly owned by one of Russia’s de buena familias. Prince Felix Yusupov was also the architect of the plot to kill the infamous mad monk of Russia, Rasputin, also known as the powerful adviser to Alexandra, wife of the last tsar, Nicholas II.

There are palaces and palaces, but none as great as St. Catherine’s Palace, built by Catherine I, wife of Peter the Great. Personally I found it more elaborate than Versailles!

A visit to Russia would not be complete without spending an evening at the Bolshoi Ballet and, for me, my favorite part of the visit. The Mariinsky Theater staged the original productions of “The Nutcracker” and “Don Quixote” and was the original stomping ground of some of the greatest dancers of all time, including Pavlova, Balanchine, Nureyev and Baryshnikov. We were so fortunate to catch “Swan Lake” during the International Ballet Festival.

Divine Lee, my co-designer on “Extreme Makeover Home Edition,” and I dressed so perfectly for the ballet. We noticed how the prima ballerina takes a bow after every act and flowers rain on the stage around her.

Our trip to Russia far exceeded my expectations. It is a country that should be on everyone’s bucket list and wonderful travel destination. Best of all, it is a great excuse to wear fur.