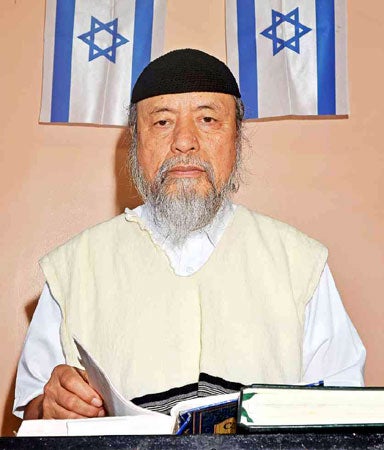 Hanukkah with Hanopol: From Rocker to Rabbi

With an appropriately rabbinical beard and yarmulke or Jewish skullcap in place of his trademark black beret, you are hard put to recognize Mike Hanopol, one-third of the legendary Juan de la Cruz Band and author of such Pinoy rock classics as “Laki sa Layaw” and “Buhay Musikero.”

The disconnect grows as he welcomes you into his home: The first sight to greet you is a giant golden menorah, the seven-pronged candelabrum that is one of the most recognizable symbols of the Jewish faith.

When you finally get your bearings, it becomes apparent that Hanopol has converted his suburban garage into some kind of temple.

At its center is a canopied podium festooned with flags bearing the star of David.  He tells you that it is called a bimah, from which the rabbi reads from the sacred books during religious services.  Pride of place goes to the ark on its left, a sealed cabinet in which the torah scrolls, the so-called Jewish bible, are reverently kept.

The first thing to enter your mind is: What the hell?

After that, your writer’s instincts kick in and catch phrases start flowing:  from jeprox to Jew, from rocker to rabbi, from Black Sabbath to shabbat.

Actually, at 67, Hanopol has found room in his life for both his rock & roll roots and his faith.

Since its first reunion concert in 1998, the Juan de la Cruz Band has become a much-in-demand oldies act.  In fact, the band is more active now than it has been for decades, featuring in several high-profile gigs this year alone, despite the fact that the members are now all in their sixties.

But for the past seven years, Mike Hanopol’s main preoccupation has been teaching his own interpretation of messianic Judaism to a small but fervent congregation in his Antipolo home.

Messianic Judaism is a relatively new religious movement that seeks to combine elements of evangelical Christianity with beliefs and practices from Judaism.  Since the two religions hold fairly divergent views on Christ’s divinity, messianic Judaism leaves a lot of wiggle room for interpretation and remains controversial among both orthodox Jews and mainstream Christians.

Don’t you have to be born a Jew to follow Judaism?

Judaism reluctantly allows gentiles to convert, but the process is a long and rigorous affair involving long scrutiny, examinations and, for males, circumcision.

“You have to go through the eye of a needle,” is how Hanopol puts it.

But the way he sees it now, his true calling is to preach the truths of Judaism in a way that his fellow Filipinos can appreciate.

“If a rabbi comes here from Israel, he wouldn’t know where to begin because he doesn’t know Filipino culture,” he says in Tagalog. “But I’m Filipino: I know the Filipino temperament, Filipino emotion, Filipino quirks.  The way I see it, if you want Filipinos to understand Judaism, you need a Filipino to teach them.  Pinoy Judaism—parang Pinoy rock.  Mabigat.”

Pinoy Judaism?  How did that happen?

“It was in my spiritual DNA,” he says.

Born in 1946, Mike Hanopol spent his formative years in Maasin, Leyte where his father was a regional director of the then Department of the Interior.   Hanopol exhibited an affinity with music at an early age, learning to play the guitar at age 9 and playing with various “combos” during his early adolescence.

Partly to discourage this proclivity, his father decided to send him to Manila to a seminary of the Society of St. Paul, with the goal in mind of perhaps encouraging him to study for the priesthood.

During his first weeks at the seminary, far from home and everything he knew, Hanopol would cry himself to sleep at night, he recalls.  Finally, an Italian priest took pity on him and started reading to him from the bible.

“Little did I know that everything he read would stay with me and stick in my subconscious forever,” he says in Tagalog.

The flavor of those biblical verses would later emerge, much transformed, as song lyrics when Hanopol began a career as a prolific composer.

“Actually, if you listen to the lyrics of ‘Balong Malalim’: Gusto niyang mag-swimming/sa balong malalim/hindi naman pupuwede/sapagka’t madilim/nguni’t kung may ilaw/akala mo’y langaw.  That comes from John 3:19, ‘The light has come into the world, but the people love darkness.’”

(In fact, many of the song lyrics of the classic Pinoy rock era have a distinct didactic, moralistic, preachy tone.  Now we know why.)

While he was in the seminary, his father took a trip to the United States to reunite with a friend, an American war correspondent whom the elder Hanopol had helped hide from the Japanese during the Occupation.  It was from this American friend that the elder Hanopol learned an astonishing truth about his own ancestry.

“The American told my father, ‘I want you to meet your Russian relatives.’  He took him to New York, where he was introduced to a family of Russian Jews named Hanopol.”

Apparently, the Hanopols had immigrated to the US from Kiev during the pogroms of the 1920s.  One of them had joined the US army, and was stationed in Leyte during the Commonwealth era, where he settled and took a Filipina wife—Mike Hanopol’s Jewish ancestor.

“Since then, I’ve carried that knowledge, although I didn’t really pay it any mind during the years I was busy with my music and with raising a family,” says Hanopol.

Hanopol’s rise to Pinoy rock stardom is better chronicled elsewhere.  Suffice it to say that the seminary didn’t take.  During the 1960s, Hanopol became a professional musician, playing guitar, keyboards and bass and singing first with the Glenmores, then with the Jungle Cats, where he met guitarist Wally Gonzalez,  and then with the Downbeats, where he met Joey “Pepe” Smith.  The trio would later form the core of the Juan de la Cruz Band, for all intents and purposes the progenitors of Pinoy rock.

Hanopol also had a prolific solo career, recording several solo albums under his own name, and as the main producer, songwriter and recorded singer of the late-’70s disco outfit Hagibis.

With the pressures of having to support a family, however, Hanopol decided to migrate to the US where he spent most the 1980s and the 1990s, working at various jobs and businesses while trying to maintain his musical career.  It was here where he was first introduced to messianic Judaism, by way of evangelical Christianity.  He joined a few “born-again” bible study groups, but found himself disagreeing with many of the ideas of mainstream evangelical Christianity.

Instead, he found himself being drawn more and more to Judaism.  He tried to connect with the American Hanopols, but they had long since ceased to be observant Jews.  Undeterred, Hanopol began a period of self-study, reading books on Judaism.

He traveled to Jerusalem, the first of many pilgrimages, and undertook rabbinical studies for two years.  He continued his rabbinical studies in Canada, after being formally converted to the Chabad sect, one of the many sects of Judaism.

“When you say rabbinical studies, you study not just Judaism, but theology, theosophy, theophany.”

Eventually, he was ordained in the Chabad sect as a proselyte, meaning he was authorized to spread the teachings, which he undertook when he returned to the Philippines 10 years ago to settle here for good.

Although messianic Judaism is a fairly large organized movement in the US, it is little known in the Philippines.

Hanopol says that when he started preaching the word, the congregation numbered about 50 followers.  Now it has dwindled to less than a dozen, but that doesn’t seem to have discouraged him.

“This is the only center in Metro Manila teaching the correct understanding of Hebrew messianic Judaism,” he says.

As befits a rabbi, Hanopol has learned spoken Hebrew, and is working on reading its script.  He also observes the many religious practices of Orthodox Judaism and follows the 613(!) commandments of the torah, among them strictly adhering to a kosher diet and keeping the shabbat or sabbath, which for Jews begins on sundown Friday and ends sundown Saturday.

Practicing messianic Judaism in a Philippine setting also presents its own unique set of challenges.

For one thing, Hermie, Hanopol’s wife of 40 years, is not a convert. Neither is their daughter Michelle, who now lives in the US.

“I’m not really a religious person,” she says. “I don’t join in the services. I’m not a bible person. But I listen, and if there’s something I hear that I like, I try to apply it.”

She supports her husband’s practice by, among other things, keeping the kitchen free of pork, fish without scales, shellfish, and other foods forbidden by Jewish dietary laws. For his part, Hanopol doesn’t impose his beliefs on her.

“Mike says he came to this on his own and no one forced it on him, so he won’t force it on anyone else,” Mrs. Hanopol adds.

What, you wonder, do his bandmates think of Rabbi Mike?

“When we play, it’s the same pulse, the same energy,” Hanopol says.  “But even though I don’t talk about it, they can feel that the spirit that moves me is different now.  It’s a theophanic intellect, meaning to say, a godly intelligence that moves me.”