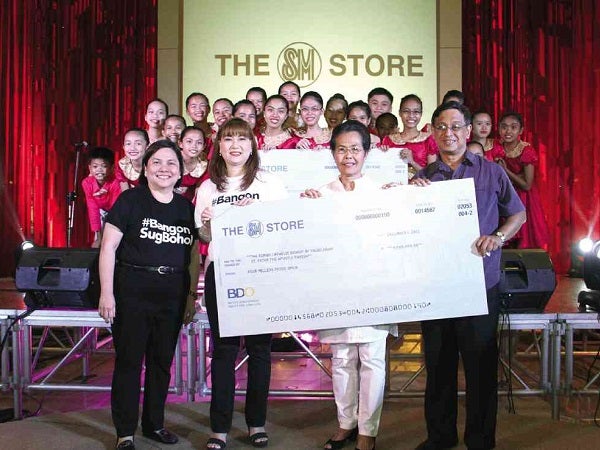 THE COUNTRY’S top retailer, The SM Store, has donated P4 million for the rehabilitation of St. Peter the Apostle Parish Church in Loboc, Bohol, considered one of the country’s national cultural treasures. The church was heavily damaged when a 7.2-magnitude earthquake hit Cebu and Bohol provinces on Oct. 15.

The amount is the biggest donation received from the private sector to date for the rehabilitation of Bohol churches. This donation was announced at the end of a thanksgiving concert by the Loboc Children’s Choir held at the SM City Cebu Northwing on Dec. 1.

The concert was part of SM City Cebu’s 20th anniversary celebration, “Celebrating 20 and Helping Rebuild Communities.” At the same event, The SM Store also handed a donation of P500,000 to the Loboc Children’s Choir to assist in the choir’s scholarship programs, allowances and other needs.

The Loboc Church is the home of the Loboc Children’s Choir.

The amounts donated came from a nationwide fundraising campaign of The SM Store held Oct. 21-31 to assist earthquake victims and the rehabilitation work required. For every P1,000 purchase, P10 went to the campaign.

Earlier, SM Prime Holdings president Hans T. Sy handed over a check for P5 million each to the city and province of Cebu to help in the rehabilitation efforts after the earthquake, bringing to P14.5 million the total amount donated so far by the SM Group to Cebu and Bohol.