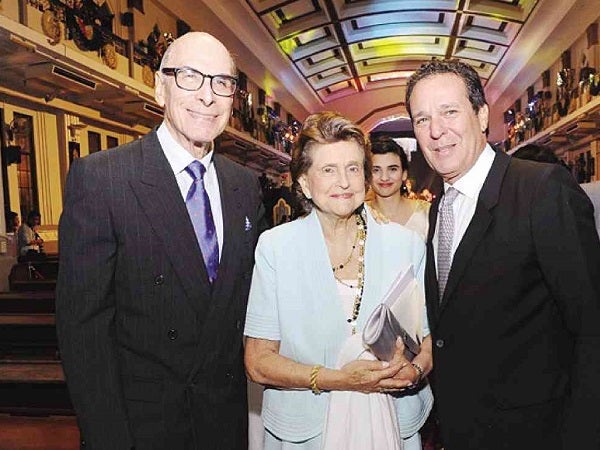 The annual Christmas Gala concert of the University of Santo Tomas ushers in the wonderful holiday season our country is known to celebrate with fervor. Held on the first Thursday of December, the event starts with the Christmas tree-lighting ceremony at the centuries-old campus grounds.

This year’s concert pushed through only after much deliberation from the co-chairs, Fr. Isidro Abaño, OP, and Maricris Zobel, on its relevance after supertyphoon “Yolanda.” The UST group decided to proceed with the concert as a fundraising effort for the rehabilitation of Eastern Visayas.

And so it came to pass that a major portion of the proceeds were earmarked for supertyphoon Yolanda relief, while continuing the concert’s commitments to the university’s heritage conservation efforts and providing scholarships to the Conservatory of Music.

Reflecting the country’s mood, the show was decidedly simpler than in years past, with emphasis on the performers from the Conservatory of Music.

After braving through Christmas traffic, I made it to the show, just in time for the finale.

A simple reception followed at the Santisimo Rosario Parish grounds.

The concert, which is held under the auspices of sponsors through the years, was supported by Belo Medical Group, San Miguel Corp., Hola Magazine, Dedes Zobel and Fifi L’Amour Bubbly.

I spotted my fellow “Celebrity Duets” member, Hayden Kho, a UST alumnus. Looking so handsome, he was with his date Vicki Belo, one of the concert’s supporters.

Vicki has already turned over P500,000 to Fourth District of Leyte Rep. Lucy Torres-Gomez for relief efforts in Ormoc. And UST Christmas Gala concert committee member Andrew Gan told me that they were able to raise around P4 million, thanks to all the donors, especially the Zobel family. It’s great to hear many stories of generosity at this time of the year.

There are many avenues to raise funds for charity. Where there is music, fashion is not far behind.

Among the event’s supporters was the SM Group, which hosted the affair at its newly opened Samsung Hall in SM Aura, and donated P100,000 cash.

A number of auction items, donated by fashion and jewelry designers, were another major source of funding. All of the show’s proceeds will go to Tabang Visayas, a coalition of civil society organizations, government and international agencies involved in post-Yolanda relief and rehabilitation efforts.

I wore a Rajo Laurel feathered creation, which was originally done for the Tatler Ball. Since that event was canceled, the show-stopping piece made its debut at “Filipino Para Sa Filipino.” My gown caught the attention of award-winning film director, screenwriter and producer Ang Lee as he was heading out of SM Aura. He had just given a talk to local filmmakers at the mall’s IMAX Cinema.

Ang Lee said he would return to the Philippines and hopefully do a film here. I politely asked him if he needed a fashionable peacock figure like me somewhere in his scripts. He was even more polite in avoiding the question and instead complimented my feathered eyelashes.

I might have better luck as an extra in the “Hunger Games” film series. My Rockwell connection Tracey Castillo gave us advance movie tickets to “Catching Fire,” in which one of the characters seems to resemble me.

Getting into my flamboyant outfits has been difficult lately because of the holiday eating and lack of exercise. Good thing I discovered Onami Slimwear from Japan.

It was launched in the country with Iza Calzado as its sexy endorser. She is the perfect, shining embodiment of 36-24-36.

The Onami undergarment has black tourmaline, a rare stone that helps in improving metabolism. (Check it out at www.onami.net.)

Let me end this column with a tribute to Filipino educators. They were recently honored in Gabay Guro, a campaign of PLDT-Smart Foundation for our teachers.

The event was held at the SM Mall of Asia Arena, and featured Ogie Alcasid and wife Regine Velasquez, Martin Nievera, Pops Fernandez, Judy Ann Santos, Anne Curtis and Derek Ramsay, among others.

This year, Gabay Guro and its supporters raffled off a house and lot courtesy of Stateland Inc. as well as a brand-new multipurpose Foton van. Livelihood program packages were also given away.

According to Gary Dujali, Gabay Guro volunteer and PLDT vice president and head of Home broadband, this year more teachers attended their “grandest tribute” yet.

“Gabay Guro is all about paying it forward to the people who have changed our lives and helped shape us into who we are now,” Gabay Guro chair Chaye Cabal-Revilla said. “Oftentimes, teachers are relegated to the background despite their hard work and sacrifice for this nation. We at PLDT and at Gabay Guro are honored to give back to the heroes of our youth.”

Since its founding in 2007, Gabay Guro has sent 190 future teachers to school through scholarships. Currently, there are 700 scholars from around the country who are under the program.

According to PSF and PLDT chair Manny Pangilinan, Gabay Guro is the organization’s “undertaking for the educational system of this country.” Pangilinan, together with Cabal-Revilla, and Gabay Guro volunteers, composed mostly of PLDT executives, joined the teacher-beneficiaries at the gathering which drew 20,000 teachers from partner schools all over the country.