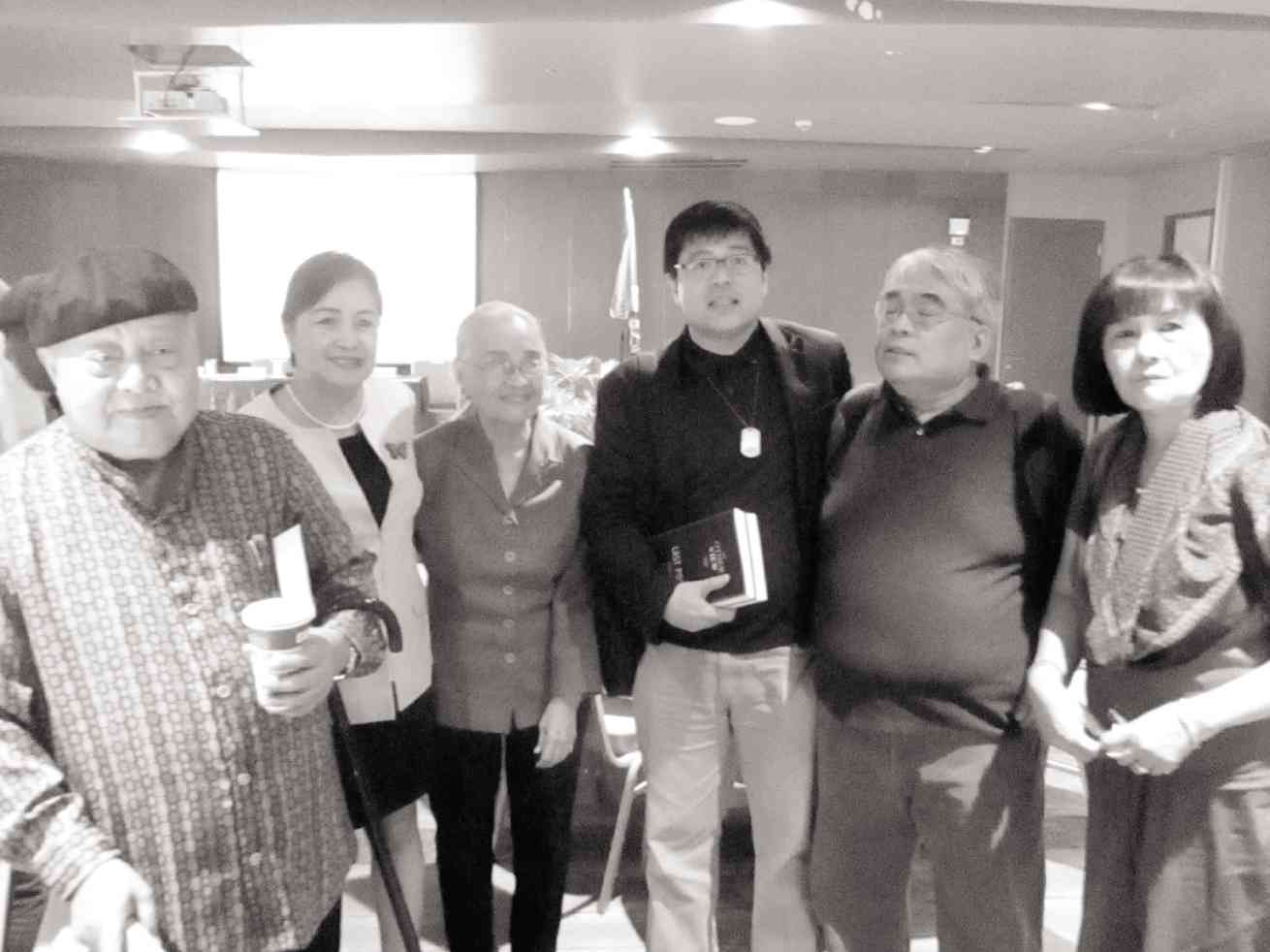 The war in Mindanao—or more accurately, in some provinces of the big island—and the quest for peace continued to be the “burning issues” which dominated the 56th National Conference of the Philippine Center of International PEN (Poets, Playwrights,  Essayists and Novelists), which is based in London.

This was held Dec. 3-4 at the multipurpose hall of the Henry Sy Sr. Building, De La Salle University (DLSU) Manila.

Panelists presented position papers, or read poems and reported on killings, followed by open forums which were a smorgasbord of questions, clarifications, opinions and discussions.

Poet Raul Moldez observed that “in some areas in Mindanao, people are at peace, unlike what you read in the headlines.” And, tackling the role of literature, he said that “a poem is a manifestation of social dynamics. It does not affect to change society. A poem cannot do that, but it can change people’s attitude. And as writers, we can humanize the horrors of war with the beauty of words.”

Playwright Arthur Casanova, who taught for years at Mindanao State University in Marawi City, shared a story of Muslim and Christian families who learned to live in harmony. And he quoted three writers who declared that “the best way for students to learn history is to experience it.”

Fictionist Rony Diaz, discussing his novels, opined that “war is permanent, punctuated by interludes of peace.”

At 20, the youngest panelist Mohammad Nassefh Macla said that he grew up in a political family and soon realized the essence of the Bangsamoro ideology of self-determination. “I am Moro and I have to stand up for it,” he declared. “But not necessarily through a jihad (holy war). I want to introduce Bangsamoro to everybody. Let us produce more writers, more peacemakers.”

During an open forum, PEN founder F. Sionil José, National Artist for Literature, said the Moros are partly to blame for their plight because their political leadership has not brought much progress to their people. Unlike, he pointed out, the settlers (who just happened to be Christians and mostly Visayans) who made their towns and cities progressive.

Christine Godinez-Ortega of Iligan City provided a bright note by reporting that despite “pockets of occasional conflict in this great island, today the    universities of Mindanao are involved in peacekeeping activities, generating harmony among the ethno-linguistic groups.”

“The writers of Mindanao have shown how culturally diverse and complex Mindanao is,” she added.

Versatile artist-writer Don Pagusara reviewed Moro resistance against the Americans and spoke out strongly against continuing US intervention today. “Writers should versify, be passionate,” he said. And whereupon he read a poem which satirized and parodied things American, then segued into a tribute to wounded Mindanao.

For the first time there was an Andres Bonifacio lecture, in keeping with the celebration of the 150th birth anniversary of the “Supremo.” This was given by PEN chair Bienvenido Lumbera, National Artist for Literature, who reviewed events in Philippine history from the time of Balagtas, “ang bayan kong sawi” (my unfortunate country), to the founding of the revolutionary Katipunan by Bonifacio.

The traditional José Rizal lecture was given by former University of the Philippines president José V. Abueva, who hailed Rizal as a great reformer who had influenced Sun Yat-sen of China and Mahatma Gandhi of India. Abueva also called for a “nonkilling Philippines,” a movement later endorsed by the PEN general assembly.

Abueva is now president of Kalayaan College, a school he founded.

Speaking for the Lumad, the indigenous peoples who were the original inhabitants of the land, Telesforo Sungkit Jr. said their lands are sacred and nobody is allowed to till these. “We have our gods and you have your gods,” he exhorted. “Respect our gods.”

He concluded, “Even with the loss of many lives, peace can still be negotiated.”

Filmmaker and all-around artist Arnel Mardoquio said his films and stories are in the service of the struggle (“pakikibaka”) in Mindanao and the search for peace.

The same can be said for another all-around artist, Danny Sillada, who resolved his phobia of war and conflicts through art. And he showed a film of his performance art and exhibit of paintings, titled “And So Let the Blood Flow.”

Another poet from Mindanao, Shem Salait Linohan, cited government statistics showing 14 percent of married women are subjected to physical abuse. “As writers,” he said, “we should help eliminate domestic violence and gender wars.”

In the same session, a student from Adamson University asked Rebecca Añonuevo of Miriam College if a poem can reduce hunger. “That is a painful reality,” Añonuevo replied in Filipino. “A poem can only awaken (‘pamulat’).” But a poem is also “food for the soul,” poet Marne Kilates pointed out.

At the end of the day, women may yet come out the victors. As playwright Malou Jacob predicted, “the 21st century will be the century of women.”

Likewise launched were books that had some support from the Beacon Centre Programme of the International PEN in London and the Swedish International Development Agency: “Peace Mindanao” (UST Publishing House), edited by Jaime An Lim; and “Lit Matters: A Manual for Teaching Philippine Literature” (Anvil Publishing), edited by Ronald Baytan.