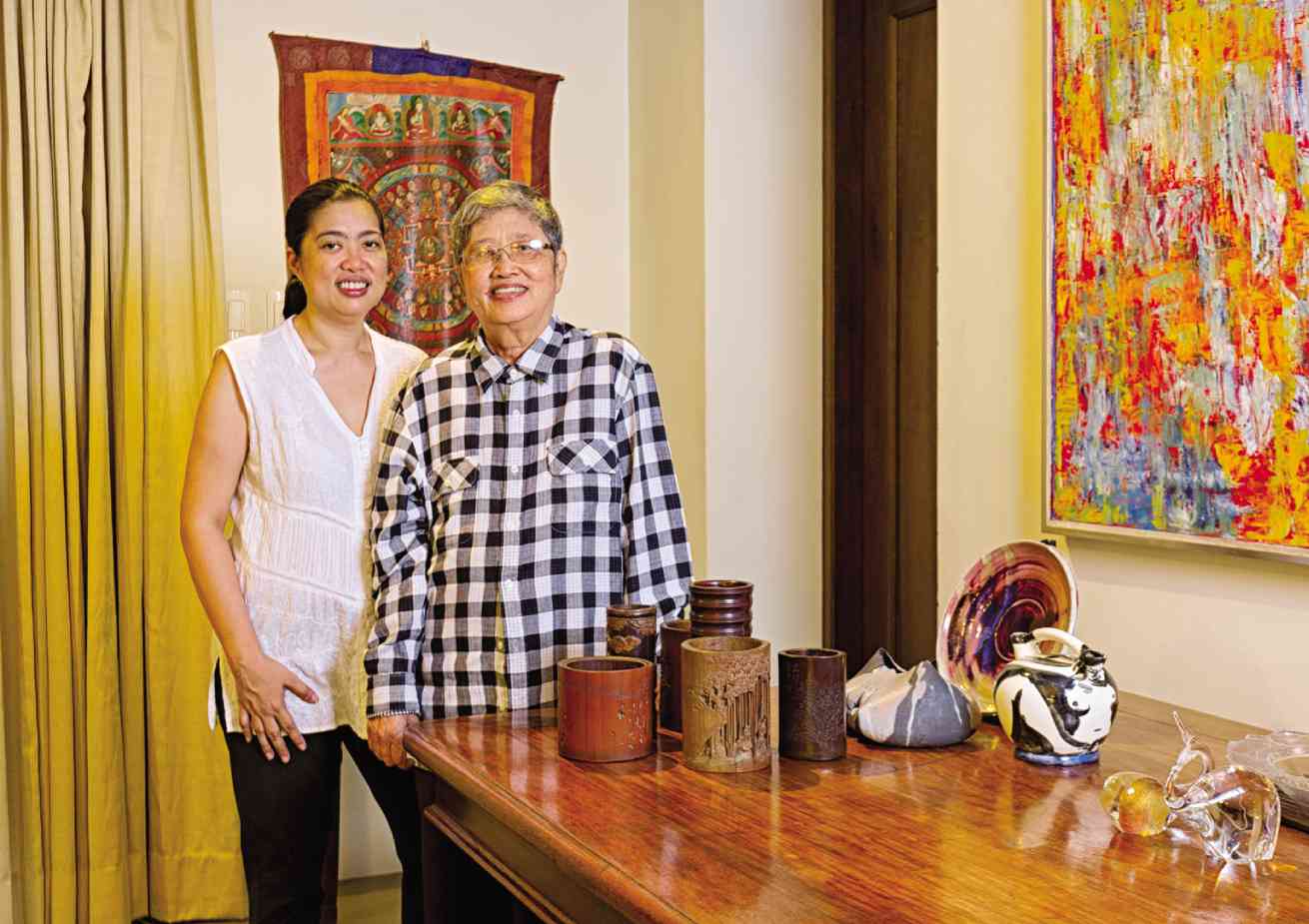 CREATIVITY in their genes: Gigi Eala and Baby Valencia by her paintings and collection of antique bamboo containers

Giselle “Gigi” Eala was 15 years old and spending a holiday in the Philippines from school break in Hong Kong, when the bike she was riding along a street in Ayala Alabang got its wheels entangled with a cable from a Meralco truck.

The driver drove away, not knowing that he was dragging an unconscious teenager for 30 minutes. Fortunately, the security guard of the late Enrique Zobel stopped the truck to call the driver’s attention.

Eala was rushed to the hospital and was found to have water in the brain. The doctor told her mother, Roceli “Baby” Valencia, that her daughter might either die, be a vegetable, or not live normally.

But she recovered, which the family attributed to a miracle as a result of prayers.

Today, Eala is a successful architect. She and her business partner, architect Cathy Saldaña, have formed Arco Group which has commercial and hospitality projects with such clients as Filinvest and Solaire.

But residential projects are what Eala considers challenging—like renovating her own family’s home.

The two-story, four-bedroom house was built by her grandmother in 1967. For the renovation, Eala was told to retain the façade.

Although she managed to salvage the wooden floor joists and the wooden trusses, the interiors had to be gutted out.

The refurbished shell—light-filled and airy with dark-stained tanguile flooring and wider narra stair treads—makes a perfect backdrop for mixing old and new objects. Window treatments are minimal as the drapery matches the color of the walls. Eala chose a neutral color scheme to let the art and the antiques pop out.

“We are all creative,” says Eala, referring to her mother, painter Baby Valencia; and brothers Rhett, the famous fashion designer, and Dennis, a lawyer with an artistic bent (but who lives in a condo).

“Neutral colors are best so that nobody can say anything,” she says.

The heart of the decor is the mix of her mother’s artworks, antiques and furniture pieces from hardwoods, made by their carpenters in their weekend home in Cavite.

A long, wooden box used for horse feeding has been reworked into a bench and placed in the living room. In the family space on the second floor, thick slabs of narra are built into a worktable and bench that look fabulous with the simple opium bed in a minimalist setting.

There is sense of protectiveness and nostalgia about the decor. “We wanted to keep my mother’s artworks by hanging them. That way, my mother doesn’t sell them,” says Eala.

Valencia comes from a prominent family. Her father, Teodoro, was an icon in Philippine media. She started as a self-taught painter  in the 1970s until she studied intensively under Federico Alcuaz. She admires her mentor’s wide range of styles, from classical realism to abstraction and impressionism.

“Every person would have a different interpretation of his work,” says Valencia. “It hit them differently and you could hang the abstractions any way you wanted.”

Valencia’s work ranges from landscapes to  still life and abstractionism.

“She doesn’t have a singular style. You wouldn’t know it was made by her if I didn’t tell you,” says Eala.

When Valencia was married to Gody Eala, an executive at Exxon, the family lived in Hong Kong when it was still British territory.

Valencia was always fascinated with antiques. She made friends with dealers who tipped her on new stock. Over time, she accumulated pieces with a lot of history. One of her first acquisitions was a laughing Buddha made of exotic wood.

During their travels, Valencia brought the children to museums where they developed their aesthetic sense. “I never forced my kids to get into anything creative,” says Valencia. Still, they ended up with an inclination towards the visual arts.

The house displays paintings by Rhett and a kariton made of cardboard by Dennis.

Valencia parted ways with her husband when the children became professionals. She’s now 74.

Visitors are impressed that the antiques harmoniously coexist with the contemporary and homemade pieces in the same space.  Large, ornate elements, such as the red-and-gold lacquered mirror, a dressing table from China, Persian carpets, coromandels, a Vietnamese wash stand, a gold-leaf screen and mahjong table, are displayed with clean-cut and organic-shaped furniture.

Smaller pieces such as Oriental pottery and ivory sculpture are clustered together and played against abstract artworks by Valencia’s friends.

“Houses filled with antiques can look scary, but this house is timeless,” says architect Saldaña. “The old pieces work well with the modern ones. It’s a feeling that you are not cramped with antiques.”

“When you combine elements of the owner with valuable pieces,” she adds, “you’ve got a house that has character.”