Why cloth diapers could be better for baby | Lifestyle.INQ ❮ ❯ 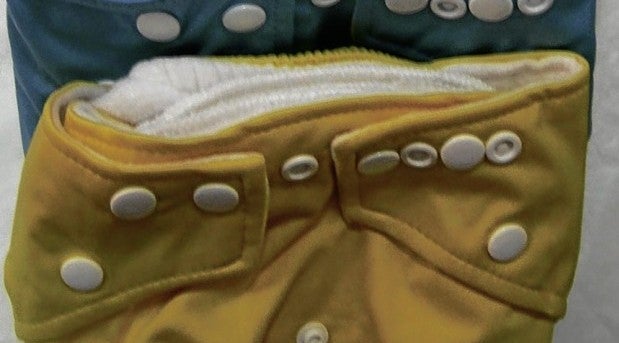 Why cloth diapers could be better for baby

While the Mother and Child Nurses Association of the Philippines (MCNAP) endorsed the disposable diaper brand’s claim, it angered moms who believe in cloth diapers and environmental supporters on social media.

The Modern Cloth Nappying Pinays (MCNP) group has over 5,000 members on Facebook. Aside from being a go-to place for support and information regarding cloth diapering, they keep a directory of cloth diaper-related stores, alert members of group buys, share nappy tips such as how to strip wash and prep new nappies, and offer a buy/sell forum.

The cloth diapers my son Jack has been using at birth are the same ones he uses today at 35 months. I’ve had to sew on new Velcro attachments on some of them, but they are still usable.

At 17 months, he started using the potty for pooping, and now he uses diapers only when we travel, at school and for sleeping at night. During naps and playtime, he wears big-boy briefs. I credit his relatively early potty training to using cloth.

We have never bought disposables, but my mother-in-law would. From the United States she had brought home Seventh Generation disposable diapers, which were hypoallergenic, and fragrance-, latex- and chlorine-free (that’s why they’re brown).

Chlorine-free wood pulp prevents dangerous chlorinated toxins from being released to the environment through the pulp production process. It is a lesser evil, but not available locally, so we do use other disposable brands when we travel.

In my research, cloth lessens the incidence of diaper rash and turns out cheaper in the long run (on average, you spend P14,000/two years for cloth vs P50,000/two years for the cheapest disposables). You can also “destash” or sell your used nappies. Or your succeeding children can use them, which means multiplying your savings.

I try to limit using disposables because of how it impacts the environment (adding to the landfill) and baby (chemicals in typical disposables increase the occurrence of diaper rash and accumulate on the baby’s immature immune system, which can lead to cancer).

Despite these dangers, some parents are still reluctant to use cloth because they don’t know where to begin or what’s in store for them.

But today’s cloth diapers have come a long way from the old-school lampin.

Chrissie, 33, has been cloth-diapering (CD’g) her 9-month-old baby for eight months. “We use cloth diapers exclusively. We started as soon as she could fit the smallest setting in her one-size-fits-most (OSFM) nappies,” she said. “It’s more economical in the long run. We don’t have to worry about allotting money for buying monthly supplies, but the environmental reasons come a very close second.

“Aside from saving money, cloth diapers are also healthier for babies, because there are no harmful chemicals that come in contact with their skin.”

Liezl, 31, has been CD’g her 4-month-old baby for a month, but not fully. “It’s better for the environment. We are still waiting for our nighttime diapers. Cloth in the morning, disposables at night,” she said. “It’s also cheaper in the long run, no chemicals, no rashes for baby, no need for rash cream; it’s a fashion statement; one size fits most and it can be resold.”

Mica, 34, has been CD’g her 9.5-month-old baby since birth. “We started with CD’g by day, and using ‘sposies’ (disposables) at night. We have been CD’g exclusively since she was 4 months old,” she said. “I don’t have to be bothered to buy and hoard disposables. I don’t have much storage in our condo and I don’t have a nanny/maid, as well. Cloth diapers are eco-friendly, too.”

According to greenspotdropoff.org, the instructions on a disposable diaper package say that all fecal matter should be deposited in the toilet before discarding; yet less than one half of one percent of all waste from single-use diapers goes into the sewage system.

Over 92 percent of all single-use diapers end up in a landfill.

No one knows how long it takes for a disposable diaper to decompose, but it is estimated to be about 250-500 years, long after your great grandchildren will be gone.

Disposable diapers are the third largest single consumer item in landfills, and represent about four percent of solid waste. In a house with a child in diapers, disposables make up 50 percent of household waste.

As much as there are obvious pros to CD’g, there will always be some cons. Our cloth-nappying moms share how they overcome these challenges:

Chrissie countered, “Sure, there’s more laundry. But with washing machines, it’s not as inconvenient to do the laundry anymore. What’s one extra load compared to the savings and the environmental implications of not using disposables? Even if you factor in the cost of water, detergent and electricity, you’ll still come out on top in the savings department.”

Liezl added, “We wash our baby’s clothes every day. It’s easy to clean the nappies. The drying part just takes a while if it’s raining.”

Said Mica: “Just when the rainy season comes and it doesn’t dry as fast. So the solution is to have enough stash. It’s not hard once you get the hang of it. I use a washing machine anyway.”

‘Poop is gross. I have no yaya rin kasi…’

“It’s baby poop,” said Chrissie. “If you can manage to clean your babies’ behinds properly, you can suck it up and do the laundry. Besides, ideally, you should flush your baby’s solid waste before dumping it in the washing machine anyway. I don’t have a yaya either, so that’s not an excuse. It’s just a part of child care.”

Mica agreed: “For poop, you just have to spray it out on the toilet bowl with a bidet and let [the cloth diaper] soak for a bit before you wash it in the machine. So there would be no poop in the machine.”

Liezl noted: “I wash my baby’s poop-stained diapers even if I have a helper. The key is to pre-rinse to get the poop out. You can also use a washing machine if you don’t want to hand wash.”

“Modern cloth nappies are so pricey. It will take me forever to build a respectable stash.”

“Not if you join Group Buys!” Mica disputed, referring to the bulk purchases of nappies shared by members of MCNP. “Or ask for these as gifts instead of plastic toys and other things you don’t really need for the baby.”

Chrissie said, “Modern cloth nappies aren’t as expensive as they used to be. There are a lot of cheaper sources that allow you to build your stash for a few thousands. Cloth diapers can go for as low as P200 each, and because they’re adjustable, you’ll be able to use them until your kid is potty trained. That’s the same amount of money you’d pay for a bag of the cheapest disposable diapers that your child will use for just a week or so.

“You don’t need a lot of diapers if you do the laundry often. And, you don’t even have to go exclusive right at the start. Even a few pairs to help you cut down on disposable diaper consumption will already make a big impact on your budget.”

“Cloth diapers are so inconvenient.”

“Yes, compared to disposables, they are,” Chrissie confessed. “Nothing is as convenient as throwing your used, dirty diaper in the rubbish bin. But that convenience comes with a price that our children may have to pay for in the future. Disposable diapers are notorious for overfilling our landfills. And these contain hazardous waste even. How many people really dispose of their baby’s poop in the toilet before disposing of their diapers? Chances are, close to none, because ‘it’s so inconvenient.’

“I’d rather go through the ‘inconvenience’ of doing more laundry than have a dirty planet on my conscience,” she said. “Besides, it just sounds inconvenient. Once you’ve established a routine, it’s just another extra step.”

Liezl conceded, “When it’s raining, we do have a hard time drying the inserts. It’s best to have a lot of extras.”

Has the ad shaken up CD’g parents or maybe those thinking of which diapering system to use?

“Sure, it has affected cloth-diapering mamas,” said Chrissie. “It has annoyed us because we know that it’s a bunch of false claims. It has created worries that can be easily debunked by people who actually use cloth diapers. Sure, you need to make a bigger effort, but in the long run, cloth diapers are worth it.”

Added Liezl: “Modern cloth nappies can last from four to 10 hours depending on your mode of diapering. You can use hemp and bamboo (stuffing/inserts), and it will not affect those who have already started with modern cloth. It’s way easier and more economical.”

Mica declared: “It just means that that [disposable diaper makers] are threatened. But CD’g moms know better. I just hope we get more support. I try my best to convert other moms as well. My daughter has never had a rash…”

“In fact, babies with cloth nappies can probably sleep better because cloth nappies are more flexible and can be adjusted to fit the baby’s particular needs.”

Said Liezl, “It’s a product advertisement. The [people behind it] would, of course, build their brand and look for loopholes in their competitor. Modern cloth nappies are the best for your child. Sleep deprivation is part of being a mom. It’s not because of diapering.”

Mica added: “That has never happened to me while using cloth. In fact, that only happened when I used a disposable diaper brand once because it leaked.”