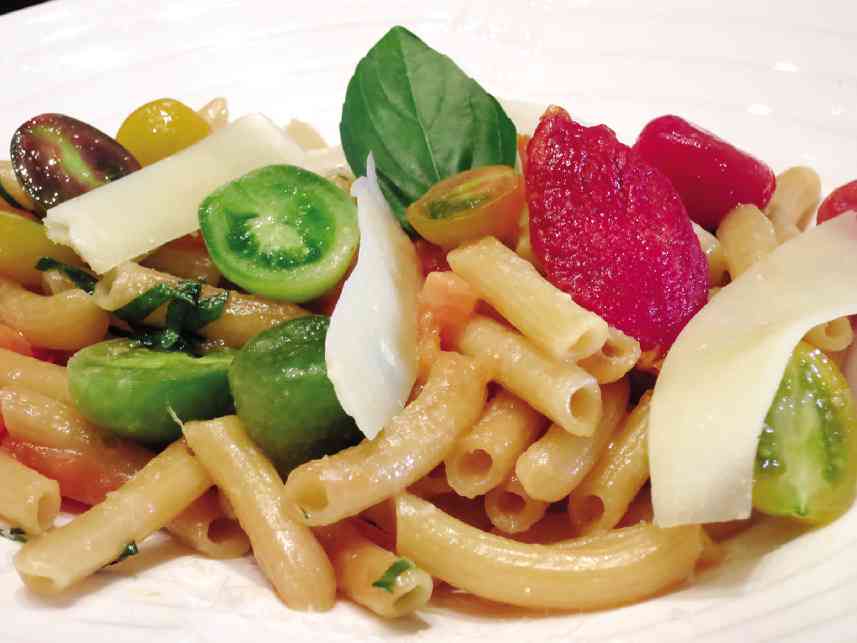 Skillet pasta with tomatoes and mushrooms

It was great to finally meet Michelin-star chef Nicolas Isnard during his recent stint at The Tivoli, Mandarin Oriental’s fine dining restaurant. Previously we had only “met” him while he was still in France, via Skype, when we interviewed him before his arrival in Manila.

Aside from preparing degustation and a la carte menus for The Tivoli, which included foie gras façon carbonara, bouillabaisse with saffron, fillet of beef with escargots de Bourgogne and tiramisu au chocolat, the effervescent chef also conducted a cooking demonstration the Saturday before he left Manila.

Chef-owner of the award-winning L’Auberge de la Charme Restaurant near France’s Dijon region, Isnard is known for mixing tradition with innovation. He gives the classic French onion soup, for instance, a contemporary look by deconstructing the main ingredients and serving them in a stark white soup bowl, while his bouillabaisse is prepared with saffron and eggs, which he says is the universal food.

During his cooking demonstration, Isnard showed us how to cook foie gras Carbonara style (with Parmesan foam and mushrooms), Chilean sea bass with lemon-ginger broth and tiramisu au chocolat.

Because there was still some time left, he also showed us how to cook pasta in a tomato-mushroom sauce—without having to pre-boil the pasta. It looked like an amazing dish—and an easy one to recreate at home. With this technique, you save a lot of time since you don’t have to boil the pasta separately.

The pasta also acquires the flavor of the tomatoes (and the chicken stock or broth), since they’re cooked together, Isnard pointed out. Moreover, the pasta becomes creamy, even though no cream has been added to it.

Now that the Christmas season is here, you may want to try cooking this easy pasta dish for your family gatherings.

Skillet Pasta with Tomatoes and Mushrooms

Heat the butter and olive oil in a large, deep skillet. Add the uncooked pasta and the coarsely chopped tomatoes. Let simmer for one to two minutes then stir in olives, cherry tomatoes and mushrooms.

Pour in chicken stock or chicken broth or water. Season with salt. Continue simmering until pasta becomes al dente, about 8-10 minutes. Grate cheese on top of the pasta then mix gently. Remove from heat.

Stir the pasta frequently while it’s simmering so it doesn’t stick to the bottom of the pan.

You can also cook the pasta beyond the al dente stage—to a softer texture. Just add more chicken stock or chicken broth or water so it doesn’t dry out.

To shave Parmesan cheese, use a vegetable peeler.