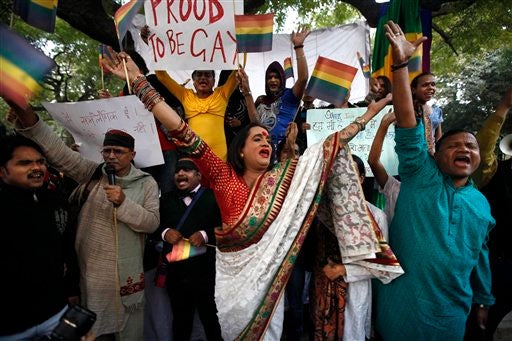 The minister, Kapil Sibal, said he was for decriminalizing homosexuality, hinting that the government could seek a judicial review of Wednesday’s Supreme Court decision or that Parliament could enact a new law.

“We need to take quick and firm action,” he told reporters, noting that millions of people in India do not want homosexuality to be a criminal offense.

The Supreme Court ruled Wednesday that only lawmakers could change a colonial-era law that bans same-sex relations and makes them punishable by up to a decade in prison.

The ruling dealt a blow to gay activists who have fought for years for the chance to live openly in India’s deeply conservative society.

Sonia Gandhi, the governing Congress party chief, also lent support to the activists and expressed her disappointment with the court order.

“I hope Parliament will address this issue and uphold the constitutional guarantee of life and liberty to all citizens of India, including those directly affected by this judgment,” she said in a statement.

India’s lesbian, gay, bisexual and transgender community reacted to the decision with defiance.

“We cannot be forced back into the closet,” said Gautam Bhan, an activist who had petitioned the court. “We are not backing off from our fight against discrimination.”

Lawyers and supporters of gays, lesbians and transsexuals vowed to continue pressing for the removal of the law, which they say encourages discrimination, even if it is rarely invoked by prosecutors.

The law, dating back to the 1860s, when Britain ruled over South Asia, states that “whoever voluntarily has carnal intercourse against the order of nature with any man, woman or animal” can be punished by up to 10 years in prison.

In a rare alliance, the groups — including the All India Muslim Law Board, Christian groups and Hindu spiritual leaders — argued that gay sex is unnatural and that India should maintain the law.

Activists have long argued that the law encourages discrimination and leaves gays, lesbians and bisexuals vulnerable to police harassment or demands for bribes.

Acceptance is slowly growing in India, though, particularly in big cities such as New Delhi and Mumbai. In the last few years, activists have staged large gay pride parades featuring rainbow-colored flags and banners, joyful songs and dancing through the streets.