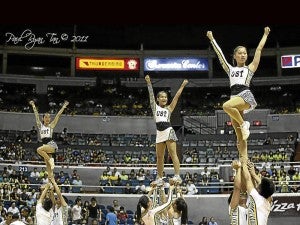 The UAAP Cheerdance Competition is one of the crowd-drawing events of the league.  Students and alumni have been scrambling for tickets for weeks.  The patient ones and the die-hards usually camp outside the ticketing office of Araneta Coliseum on selling day.

The competition’s popularity can trace its roots to the rivalry between the UP Pep Squad and the UST Salinggawi Dance Troupe in the early 2000s.  Fans of both teams would dissect and analyze routines like pundits.

This year’s defending champions, UP Pep, have given fans a lot to speculate about.  They were seen with blonde hair a couple of weeks before the competition.  Team captain Kae Madrigal admits that changing hair color took a lot of sacrifice from her part, but it’s a sacrifice she willingly took for the team.

Online forums have also been giving clues on what the theme of UST Salinggawi will be.  The winningest team in the league is said to have prepared a “light” routine and worked overtime to perfect its piece.

It’s also said that UST Salinggawi started focusing on its routine only last month as it had been busy taking part in UST’s many Quadricentennial activities. 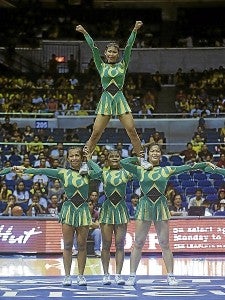 Everything’s hush-hush on the camp of the FEU Cheering Squad.  They train behind the closed doors of their gym. Assistant coach Peter Padilla says that it is part of a strategy to keep the lid on the team, the better to surprise opponents.

There is reason to fear FEU.  They are tired of being bridesmaids to UP and UST. They practice everyday to get every move and every smile right.  They are not leaving things to chance.  They are focusing on executing their routine flawlessly.

Other teams should not be discounted. The Ateneo Blue Babble Battalion has previously bumped off powerhouse UST from the top three.  De La Salle Animo Squad has consistently impressed the judges of the National Cheerleading Championship whenever they join.

The Adamson Pep Squad has been known to push the envelope when performing stunts while the UE Cheering Squad has been improving every year. Everybody expects the NU Pep Squad to be a threat in a few years after receiving a shot in the arm with the change in the ownership and management of its school.

The group stunt competition will be introduced today.  Only a few of the squads sent a representative but it is something to watch out for and see if it catches on.

There are no second chances for any of the team.  They either win the title or enter the top three.  Losing would mean waiting and training another year to redeem themselves.