‘The Addams Family’: Too bad it closed too soon | Inquirer Lifestyle ❮ ❯ 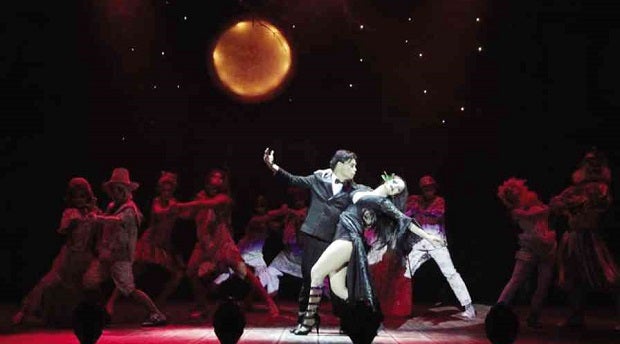 ARNELL Ignacio and Eula Valdes as Gomez and Morticia Addams in Atlantis Productions’ “The Addams Family,” directed by Bobby Garcia

‘The Addams Family’: Too bad it closed too soon

The sad thing about Atlantis Productions’ final show for the year, “The Addams Family,” is that it closed too soon—Dec. 1, after a mere three-weekend run.

The idea of the musical’s premature departure as the work of its ghastly, death-fixated characters certainly makes for an entertaining thought, especially since, in Marshall Brickman and Rick Elice’s paper-thin book, they have become subservient to a dry-as-dust, all-too-human plotline.

The titular clan of macabre eccentrics invented by American cartoonist Charles Addams now has to contend with that mundane thing called love.

Wednesday, daughter of Gomez and Morticia, has— gasp!—fallen for a “normal” boy named Lucas Beineke, and has invited the boy’s parents over for dinner in their Central Park residence (yes, the Addamses now live in the middle of that New York City greenspace).

As designed by Faust Peneyra, the family residence exuded shabby grandeur. A golden proscenium bearing a few cracks contained the red velvet curtain that greeted the audience at the start, and, for most of the show, highlighted the relative emptiness that defined the interior of the Addams house.

But the fitting atmosphere (with lighting design by Dong Calingacion) couldn’t disguise the shallowness of this two-and-a-half-hour musical.

“A Disastrous Dinner,” like another episode of a forgettable late-night sitcom, would have been a more specific title.

Factoring in Andrew Lippa’s eclectic but otherwise unexceptional score, “Addams” seemed more like a run-of-the-mill vaudeville—a potpourri of song and dance numbers whose only purpose, it seemed, was to delay the arrival of a spine-chillingly corny ending.

But if this Atlantis production proved anything, it’s that, with the right people, miracles could happen.

At the Meralco Theater where it played its 10 performances, “Addams” gracefully rose above the shortcomings of its source material to provide Gomez and his family a rich and spirited life.

The director was Bobby Garcia, who, barely three months ago, also spearheaded a surprisingly terrific staging of “Carrie,” the infamous musical adaptation of that Stephen King novel.

Garcia’s golden move was finding comedy in creepiness. This “Addams” did not try to scare us to death; it wanted us to die from laughter, or at least have a flatulent night or two.

And who wouldn’t have, with one of the year’s finest acting ensembles at the core? This was a cast that obviously reveled in delivering the musical’s bodily dysfunction-heavy humor, and more importantly, found the right balance of “normal” and animated eccentricity in their portrayals.

One only needed to see how they went for the show’s first big laugh to be convinced of that.

In the opening number, “When You’re an Addams,” a dance segment ensued (choreography by Cecile Martinez); “Rigor mortis!” Gomez shouted, and everyone went stiff as sticks, the audience deliriously chortling in the dark.

These Addamses felt immediately familiar—the neighbors everybody avoids and gossips about, and not just those distant characters from the ’90s TV series locally broadcasted by Cartoon Network.

Eula Valdes cut a sultry figure as Morticia, but she’s also that nightmarish mother-in-law who’d rather die than see her daughter marry someone “normal.”

K-La Rivera, she of immaculate voice and leading-lady poise, scaled Wednesday down to a bastion of teenage toughness and confusion.

And Carla Guevara-Laforteza transformed the poorly written role of Lucas’ mother Alice (the Beinekes are treated like flimsy cameos by the book) into the funniest character on that stage.

Jamie Wilson was virtually unrecognizable as a squeaky-voiced Uncle Fester, the crowning achievement of Johann dela Fuente (makeup and hair) and costume designers Pepsi Herrera and Edwin Tan. His inspired disappearing act was more than enough to forgive the fact that his role was no more than a bloated sort-of-narrator with a senseless Act II solo titled “The Moon and Me.”

But the heart and soul of this “Addams” was TV personality Arnell Ignacio.

In a performance fueled by unerring comedic instinct, his Gomez was, all at the same time, conniving father and conflicted husband, passionate lover and clueless party host.

Ignacio oozed with magnetic charm as he put on the role’s many delightful aspects, like a magician showing off his box of tricks.

In a production that sparkled despite its material’s flaws, Ignacio was the brightest flame. This was his show; without him, “Addams” would have been only half as lustrous, half as hilarious.