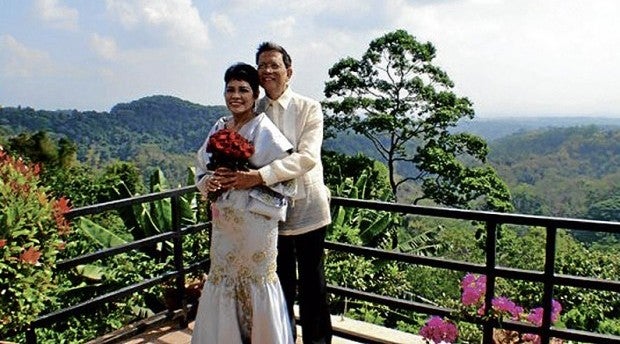 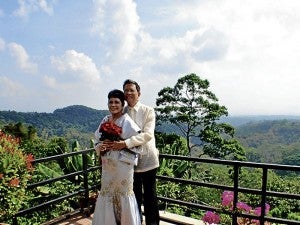 It was an auspicious day by all counts, except for the infinity-edge  pool which had to be repaired two weeks before the event because of some leaks. It was still being repaired when we arrived at Sinagtala, a forest resort and retreat park on the mountaintop of Tala, Orani, Bataan, on Friday, May 6.

Getting married in church for the first time after 40 years of living with my man was like taking the first step once again. I must have slept a bit, but woke up at 4 a.m. and decided to take a shower, since I was told the videographer was coming at 5 a.m. for the pre-nup photos.

Mario and I got married the first time on May 5, 1971. It was Karl Marx’s 153rd birthday. I didn’t know I was getting hitched until we reached a safe house on 20th St. in Quezon City. Pandong officiated in the underground (UG) activist rites that had us exchanging bullets instead of rings. Boy M was our witness. I wanted Commander Juaning to be our Ninong. It is the same Ka Juaning who, 40 years later, would indeed be our Ninong, if in absentia.

We contemplated marrying again, even thinking of a wedding at the Great Wall, after my mother and my sister went to visit us when we were staying in Beijing in 1982. My mother thought we were living in sin and firmly believed our UG marriage was not binding.

We got married the second time in a hasty civil rite in February 1987 in Bulacan. The ICM sisters of St. Theresa’s required our daughter Maningning to produce our marriage contract. Our witness the first time, Boy M, was again our witness the second time around, with Gabi Bongalos. He now remembers that at the first wedding, we had ice cream to share, and at the second, we had pancit in a restaurant.

I didn’t want formalities or a renewal of vows for our 40th anniversary at the beginning. I really wanted to travel to Europe and thought of saving up for that. It was Mario who wanted to marry me again this time around. And he wanted to give me a real wedding. He thought I had been deprived of it, and he owed it to my family. If my parents were still alive, especially my mother, she would have been exultant.

And we saw Sinagtala! Thanks to architect Nestor David, who told me about this gem of a place in my hometown, my beloved Orani. It was love at first sight, even when the chapel was still under construction. We were the first couple to get married in the beautiful chapel, a work in progress that had no pews yet.

The wedding ceremonies and renewal of vows were so dreamlike. Everything surrounding it was a labor of love. The flower arrangements and décor were done by my cousin Arthur, who had stints in Brunei decorating the princess’ party venues. My maria clara gown was custom-made for me by niece and nephew, Lou and Mar. Daughter Banaue managed the processional.

My sisters, Doris, Helen and Vinia, with their so-called angels, lovingly prepared the food spread of Orani’s crabs and prawns, bangus, hamonado, chicken cordon bleu, and many more. National Artist Rio Alma brought the champagne, Lad Mojica the lechon, and my niece Edel the bottles of wine for every table. My Ate Edna baked the delicious wedding cake.

The video and photo coverage were courtesy of my sisters, Ate Baby and Grace. My son-in-law, Dominic, and niece Czes prepared a 20-minute audio-visual presentation which unfortunately was not shown because of technical issue.

Our ninongs and ninangs were chosen based on their distinct roles in the various stages of our married life. Virgilio S. Almario, National Artist for Literature, is a close friend and a great supporter of the Maningning Miclat Art Foundation. Aurora Miclat, or Ate Auring, was Mario’s favorite teacher at Olongapo Provincial High School.

Tony Roman, Head/Secretary of the Presidential Legislative Liaison Office and former representative of Bataan, is an old friend of the Cruz family. His wife, Rep. Herminia Roman, met with us at Radio Peking when she went to China in the 1970s. Secretary Tony was instrumental in getting passports for me, my Maningning, and Banaue (minus Mario) during the Marcos dictatorship, so the three of us were able to visit the Philippines in 1984.

Dr. Edna Z. Manlapaz, retired Ateneo professor and founding executive director of the Ateneo Library of Women’s Writings (Aliww), a repository of memorabilia of Filipina writers, including Maningning, is founding director of the Maningning Foundation and current vice president. Marcelo Bongco, Tatang, is my best friend Ida Somoza’s father. He is like a father to me in the same way that his daughter, Ida, is like my own sister.

Aquilina M. Riego de Dios, Mario’s Tia Quiling, is one of only three living (out of nine) siblings of his father. Juanito Rivera, aka Kumander Juaning, is my favorite NPA and our original choice of Ninong during our UG marriage on May 5, 1971. There, too, was Mely Tanglao Corpus, our old friend and kindred soul, fragile and gentle.

Boy Martin is an old bosom friend. The Martin and Miclat families, parents and children, are very close. Karina Bolasco, Anvil publisher, is an old friend who published a number of Miclat books, such as “Voice from the Underworld: A Book of Verses,” in three languages by Maningning; “Beauty for Ashes: Remembering Maningning,” an anthology of poems by veteran and amateur poets edited by Mario and Joey Baquiran.

Karina also published “Beyond the Great Wall: A Family Journal,” a collection of essays written by Mario, Maningning, Banaue and me. It was a 2006 National Book Award winner. The latest book she published is Mario’s best-selling novel “Secrets of the Eighteen Mansions,” longlisted in the 2009 Man Asian Literary Prize.

And last but not the least, Dr. Edna Garayblas Monson, Mario’s cardiologist. She’s our guardian angel and sister. She keeps Mario healthy, alive and productive through her tender loving medical care.

The wedding ceremony was not short, but neither was it long. The homily given by my brother Efren was both thought-provoking and funny. A very promising band of four from Orani named Zephania provided heavenly hymns.

My Banaue rendered “The Lord’s Prayer” in her angelic soprano, leaving us all in awe. Banaue sang once more after our marriage vows, this time the romantic “Ikaw.”

Guests say the actual highlight of the ritual was our vows to each other. Here are some excerpts from mine:

“. . . Thank you for bringing out the best in me and recognizing and enhancing my identity as a woman, as a person and as a human being. Thank you for loving me for what I am, for bearing with me, imperfect me . . . And thank you for showing me how to love our people and our country.

“In return, I promise to continue to love you; to even love you more, kahit ngayong maputi na ang buhok mo . . .

“. . . So in sickness and in health, for richer or poorer, for better or for worse, I will love you not only in this world, but also in the other world where there’s no more sickness, no more pain, no more evil, no more poverty, and no more exploitation of man by man. AMEN.

With much love, Nanay.”

Here are some excerpts from Mario’s vow:

“Alma, you are my soulmate.

“In 1965, UP in Diliman for me was a merry mix-up of souls in thoughts, beliefs, ideas, philosophies, ideologies, and idiosyncracies. The caballero trees lining its avenues bloomed and shed their leaves in the cool months of February. I started looking for you . . .

“. . . Suddenly you were there, listening to my lecture under a spreading acacia tree in Diliman. And my sight was nailed on you, as we say in Tagalog.

“From then on, no weeping willows, sky-rocketing maples, evergreens, chestnuts, apple, or tangerine trees in Beijing, Liuyang, Talian, or Tsingtao could separate us.

“I call you Nanay, for being the best mother of our children, Maningning and Banaue, and more; and now mother-in-law to Dominic . . .

“In this chapel of the Sinag Tala, amidst a jungle of a thousand and one trees, I promise to keep on loving you, for another thousand, and tens of thousands of years.

“Like a fairy tale, we continue to live happily ever after!”

What’s so beautiful about this event is, in lieu of gifts for our Ruby Anniversary, donations given to the Maningning Miclat Art Foundation have reached an amount close to the cash awards to be given to the three Grand Prize winners of the 2011 Maningning Trilingual Poetry Awards. And if there are other generous givers out there, you are welcome to contribute your gift to the foundation. Xiexie!