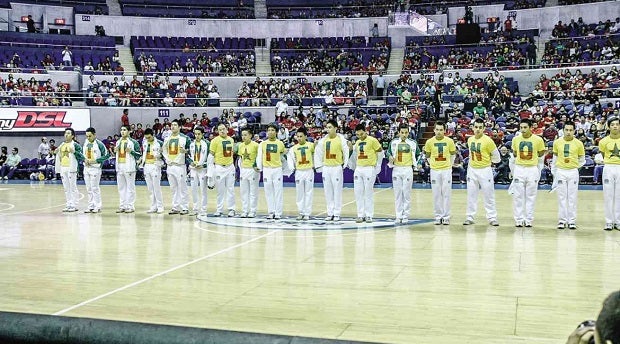 Last Saturday, the two schools’ respective cage squads met again on the hardcourt of Smart Araneta Coliseum, though in a different occasion; San Beda, the 2013 NCAA champion, battled La Salle, the 2013 University Athletic Association of the Philippines (UAAP) titleholder, for a charity game.

Both schools played not so much for bragging rights on which team would be the “ultimate champion”; rather, they came out to help raise money for victims and survivors of Supertyphoon “Yolanda.”

Organized by FilOil Flying V, the game provided an opportunity for basketball fans from both schools to have fun while getting involved in a worthy cause. It was a charity game, and the atmosphere was light-hearted. But the fans came in full school regalia of San Beda Red and La Salle Green (coincidentally Christmas colors).

Bedan and La Sallian alumni also brought their families along to watch collegiate basketball—a rare sight since the two schools belong to different leagues. But it it was also a sneak peek at what it would look like if San Beda and La Salle were to play again in one league.

Goarchers.com posted on Twitter: “If San Beda would join the UAAP, it would make the league even more exciting. Great team with passionate fans.”

A week before the game, San Beda’s Art dela Cruz posted on his Facebook page: “Will take it seriously. Not an ordinary game for us.”

Though just an exhibition game—with the court announcer saying each shot was worth P5,000—the Red and Green galleries cheered like it was the finals all over again.

The match was intense, but minus fans cursing players or referees.

The Big Dome was filled with deafening drumbeats from the schools’ cheerleading bands.

Then the announcer said there would be no overtime, adding more excitement and pressure for the players.

As the first half ended, La Salle was leading by 10 points; but fans were treated to a different kind of half-time performance. The La Salle pep squad started off with its high-caliber routine. At the end of the performance, the male cheerleaders took off their jackets to reveal yellow shirts emblazoned with “Tulong Pilipino” at the front and “Bangon Pilipinas” at the back—much to everyone’s applause.

The game ended in a tie; the Red Lions caught up with the Archers’ lead in a suspense-filled second half. When the final buzzer sounded, thunderous cheers and applause erupted.

Everyone looked happy. After both teams had their photo-op together, they weren’t sure who would sing their Alma Mater hymn first. The San Beda crowd gestured for La Salle to do it first.

There were quite a number of empty seats, but crowd attendance was nonetheless satisfactory. In hindsight, this could be a start of something big, like mounting another one-game event, when the two champion teams from the NCAA and UAAP would play again to support a common cause.

After the game, fans, alumni and players left with happy hearts, knowing that they were able to make a difference together, showing what real sportsmanship is all about. We stood united regardless of school colors, for we are all Filipinos with a common goal: to help.