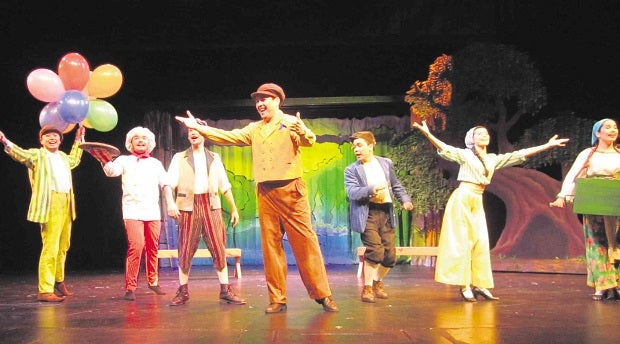 It was a unique press conference in the sense that the two hosts—actors Reb Atadero and Arya Herrera—fielded all the questions to the panel of actors and directors. And the invited media persons kept prudently silent, because there was no open forum.

The occasion was the recent launching of the 77th theater season of Repertory Philippines (tel. 571-6926) in celebration of its 47th year, at Greenbelt I OnStage, Makati City.

The thriller “Wait Until Dark” has become almost iconic because of the 1967 film adaptation starring Audrey Hepburn, who was nominated for an Academy Award for her role as the blind woman Susy. Rep’s production will have Susy played by signature Rep actress Liesl Batucan, with Joel Trinidad and Robbie Guevara playing the two thugs terrorizing her. Miguel Faustmann will direct.

During the press con, Faustmann said he kept telling Batucan “to just believe you’re blind; there are several methods. I kept telling her your eyes are your ears; these are the only defense so you can see in the dark.”

To get into the spirit of the role at home, the actress said she tried switching off all the lights.

The “prestige play” of the season is the searing drama and black comedy, “August: Osage County” by Tracy Letts, winner of the Pulitzer Prize and five Tony Awards. Chris Millado of the Cultural Center of the Philippines will, for the first time, direct a play for Rep.

“August: Osage County” is about a dysfunctional family with the patriarch dead apparently from a suicide, and the matriarch Violet “drug-addicted and brain-addled.” The film adaptation stars Meryl Streep, Julia Roberts and Ewan McGregor, and is already generating Oscar buzz, with Streep once again earning raves as the matriarch.

Rep artistic director Baby Barredo, who will play Violet, says the character “has cancer of the mouth.”

“All the actors have their big moments on stage,” she added. “The actors learn and grow. I am not the star in this play. The play is the star.”

Millado also called the play “a soap opera from hell.”

The highlight of the press con was an entertaining production number, with sets and costumes, from “Pinocchio,” the fairy tale of a puppet who comes alive.

Oliver Usison played Geppeto, the puppet maker, with child actor Guido Gatmaitan as Pinocchio and Batucan as the Blue Fairy.

Director Joy Virata noted that she stages “Pinocchio” every 6-8 years, so that a new batch of children get to see it whenever the play, with its moral lessons, is presented.

“Noises Off” by Michael Frayn, meanwhile, is a comic play-within-a play, a farce which won the Laurence Olivier Award for Best Play. I recall that the movie adaptation many years ago was a riot, starring Carol Burnett, and the late Christopher Reeve was a scream as a macho man who fainted at the sight of blood. Faustmann will also direct “Noises Off.”

Rep’s big musical at the end of the year is “Scrooge,” a takeoff on Dickens’ “A Christmas Carol,” starring Faustmann and directed by Barredo, who got the last word in by declaring that “passion is not just for the theater, passion is for living.”