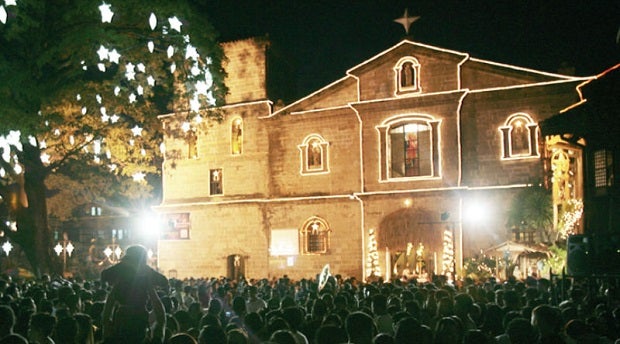 Manila Archbishop Luis Antonio Cardinal Tagle said Catholics should attend the “Simbang Gabi” (Dawn Mass) as it is a typically Filipino way of celebrating the great feast of Christmas.

“We wish to encourage the practice of Simbang Gabi, whether at dawn or in the evening, because it is a great source of spiritual nourishment for our faithful,” Tagle said in a circular addressed to the clergy of Manila setting out the guidelines for celebrating the nine-day Simbang Gabi which starts Monday, Dec. 16.

Tagle explained that with Simbang Gabi, originally known as Misa de Aguinaldo, the faithful make their “aguinaldo” to God for the great gift of Jesus.

“The practice can also be understood as the preparation of the faithful to receive from God the great aguinaldo of Christmas, which is Jesus, the savior of the world,” Tagle said in the circular issued in November.

Simbang Gabi, which means Holy Mass at night, is the Filipino version of the Misa de Aguinaldo and traditionally begins on Dec. 16 and ends on Dec. 24. The Masses are held at around 4 a.m. In the 16th century, Pope Sixtus V ordered that the Mass be heard before sunrise since it was the harvest season and the farmers needed to be in the fields right after the celebration.

Tagle said Simbang Gabi for Filipino Catholics was “above all an expression of their filial devotion to Mary, the Mother of God.”

“For nine consecutive days, they join and accompany her, so to speak, as she awaits the birth of her Son. For this reason, the Masses on these days are celebrated as solemn votive masses [Masses for a special intention] in her honor,” Tagle said.

In the guidelines that he issued, Tagle said Simbang Gabi had always been celebrated at an early hour, from 4 to 5 o’clock in the morning.

“It is this Mass alone that is considered Simbang Gabi or Misa de Aguinaldo,” he wrote in the circular.

If the Misa de Aguinaldo is celebrated from 8 p.m. onwards, “it should be motivated by genuine pastoral care for the spiritual benefit of the faithful,” he said.

Tagle said the celebration of Misa de Aguinaldo at other times—morning, midday or late afternoon—was not in keeping with the liturgical norms of the Archdiocese of Manila and was to be regarded as abuse.

“Therefore, only the dawn and, when pastorally required, the evening Masses are considered Simbang Gabi or Misa de Aguinaldo,” he said.

Tagle also reiterated that Simbang Gabi Masses should be celebrated only in the parochial church and not in shopping malls.

Simbang Gabi may not be celebrated in malls or shopping centers, unless there is a chapel in the establishment, where the Holy Eucharist is celebrated with frequency and duly approved by the archdiocese, he said.

“We do not allow Simbang Gabi to be celebrated in corridors or hallways of shopping malls where the celebration of the Holy Eucharist is needlessly exposed to shoppers indifferent to the celebration,” said Tagle.

In Leyte province, much of which remains in ruins more than a month after the monster typhoon Yolanda devastated Eastern Visayas, the Archdiocese of Palo has announced that the Simbang Gabi and Misa de Gallo will still be celebrated despite the damage to its churches.

Fr. Amadeo Alvejo, social communications director of the archdiocese, said there was no stopping the celebration of the two traditional Filipino Catholic Masses heralding the birth of the Child Jesus.