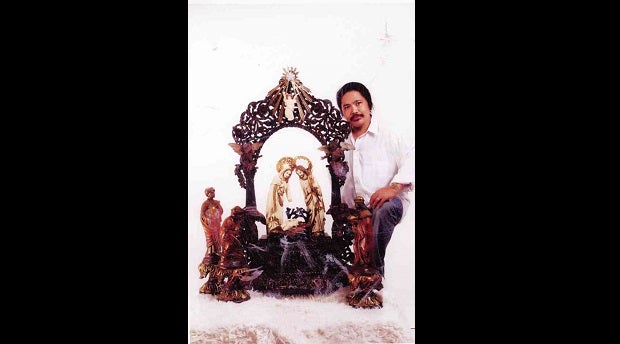 FILIPINO sculptor Dondon Awa Jr. with his work made of ivory, “The Holy Family”

The beautiful chapel of Our Lady of the Visitation of Piat in Canyon Ranch subdivision in Carmona, Cavite sits on a hill like the shrine in Piat, Cagayan.

Like the Basilica Minore of Our Lady of Piat, the chapel was built by architect Ignacio Bautista upon the behest of Alfonso “Boy” Reyno who also led the foundation that built the basilica that started in 1993.

The devotion of lawyer Boy Reyno to Our Lady of Piat knows no bounds. He has always sought for ways to thank her for her saving his life when he was ambushed in 1992 when he was representative and when he had cancer, and for saving his wife Yoly Reyno from cancer of the lungs.

The Canyon Ranch Piat chapel holds a Sunday Mass at 10:30 a.m. Fr. Ronel Elano is the administrator representing the Parish of Nuestra Señora de Santissimo Rosario to which the chapel is attached.

A pastoral council and a liturgical committee have been formed to arrange for Masses and serve in them.

Reyno will also build a pilgrim house for devotees who come up to Piat in July for the fiesta.

The complete name of the shrine is Shrine of Mary, Queen of Peace, Our Lady of Edsa. The rector is Rev. Fr. Nilo Manggussad; assistant priest is Fr. Benjo Fajota.

Filipino sculptor Dondon Awa, who did the replica of Our Lady of Piat in 1995, is holding an exhibit and sale of his creations at the Tagaytay Highlands Sports Center until Jan. 14, 2014.

The replica of the Virgin of Piat which was made due to the request of then Archbishop Diosdado Talamayan is the image being brought in a procession every first Sunday of December, organized by the Cofradia de la Inmaculada Concepcion and the Intramuros Administration.

Dondon and his wife Josie Awa have been running Our Lady of Manaoag Religious Artifacts along Tayuman Street, Sta. Cruz for the past 25 years.

My good friend Rheez Chua, fashion designer and tenor, has been telling me about the Sinag Hospital Volunteers, about how they have been helping indigent burnt victims at the Jose Reyes Memorial Hospital and 11 other hospitals.

Their vision is to be able to “bring hope and love” to those who are very hard to take care of.

Rheez Chua and Bobby Novenario started helping in 1983 by buying medicines and clinical materials needed to take care of the indigent burned victims.

As a tenor, Rheez performs for free during fundraising concerts to raise money for Sinag. Evelyn Roque volunteered in 1987

As in fairy tales, the idea of Sinag came about in a very simple way. A doctor, working in the Ministry of Health, one day realized the deplorable conditions of patients in government hospitals. Going home, he asked his wife, who was a committed member of the Focolare Movement, to do something about it.

Starting with a group of 12 ladies and armed with nothing else but the will to love, Sinag was born. Those who have served as presidents include Chuchi Quevedo; present president is Leni Reyes, while chair is Lilia Tantoco.

Chuchi told me in an interview, “There is a need for new volunteers to continue the valuable service we offer. We, at Sinag wish to encourage others, especially younger ones, to join us. We are inviting you to become an instrument of God’s love, to volunteer, to share your talents, to visit the poor patients, cheer them up, give them hope. ”

All it requires is two hours of your time per week.

During a rare experience at being served lunch by scholars of Maligaya Institute of Culinary Arts and Residential Services (Micars), we saw how the girls were taught how to serve and we enjoyed the menu that they prepared.

Micars hold classes at the Tahilan building along Leon Guinto Street, Malate. The students are high school graduates who belong to poor families, but who want learn how to earn a living—by learning how to cook and do housekeeping activities.

Graduates of Micars are easily employed in restaurants and hotels.

Micars is an apostolate of Opus Dei. School directress is Rowena Nazareno.

High school graduates who may want to apply for scholarships can call Maligaya at 5257429. Those who want to donate for the upkeep of the school can text Isabel Barcenas at 0915-2838170.

Cardinal Luis Antonio Tagle will celebrate Holy Mass at the San Agustin Church tomorrow at 8:30 a.m. for the Martha’s Vineyard members in thanksgiving for the building of the chapel in Baseco, Tondo. The construction was organized by Nena Prieto, a member.