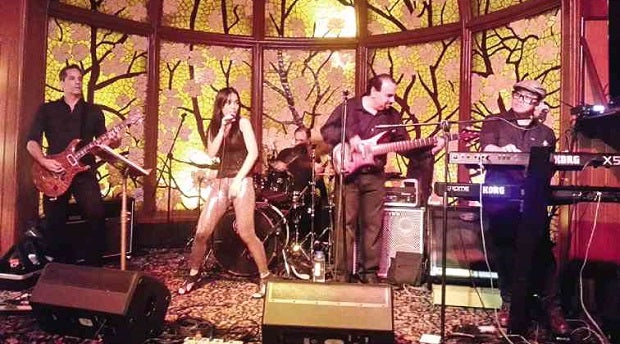 KO JONES rocks the stage at the Tap Room in Manila Hotel. PHOTO BY POCHOLO CONCEPCION

The news reached us sometime in September via Inquirer food columnist and moonlighting singer Margaux Salcedo, who said that her monthly stint, as well as those of other jazz acts at the Tap Room of Manila Hotel, was no longer being renewed.

And then came an invite from Manila Hotel management itself, asking us to attend the launch of something new at the Tap Room.

On Oct. 9, we felt a bit uneasy watching a rock band, KO Jones, playing onstage at the Tap Room; the scene looked strange, because the English pub-style venue, not to mention the Manila Hotel, has always been known for its jazz gigs. In fact, for the past few years, the Tap Room had featured only jazz artists in its nightly schedule of performers.

We’re not sure if the change had to do with the resignation of Manila Hotel sales and marketing senior vice president Ginny Banaag some months ago. It was Banaag who was responsible for keeping the jazz gigs going at the Tap Room.

What bugs us is that KO Jones sounds like the quintessential Gapo band rocking out the laid-back confines of the Tap Room. But that won’t be a problem, hopefully, if tourists looking for a noisy night out will consider visiting the Manila Hotel.

The Discovery Suites—which landed in the news some months ago in a not-so-nice manner because Janet Napoles was reported to have been holding office at the hotel’s 25th floor—has also something new to offer. Its Serendipity Lounge on the 22nd floor now has live gigs on Wednesdays and Fridays, 6 to 9 p.m., featuring a quartet called G-Sustained.

A few media friends were with us on the Wednesday night we visited, and they wanted to hear standards. Requests were shouted out, making Kutsukawa look a bit nervous, although she handled the pressure well by singing “The Nearness of You,” “Smoke Gets in Your Eyes,” “The Look of Love,” “Alfie,” “Cheek to Cheek,” “Dindi” and “One Note Samba.”

Her voice sounded fine, though apparently she would need more pressure from discriminating journalists like Isah Red, if she wants to shine from the rest.

Napoles’ offices, by the way, are not in the same premises, but in the adjacent building, said a Discovery Suites manager.

The second time we heard “Something”—played with a ukulele, a favorite instrument of its composer, George Harrison—was at Murphy’s, an Irish pub in Makati City. The band onstage, the William Russell Experience, was doing a mixed set list of covers and originals.

Fronted by corporate executive-turned-musician Russell Sobrepeña on vocals and guitar, with Jun Raymundo (lead guitar), Nap Apolinario (bass), Neil Manapat (drums) and Lenny de Jesus (keyboards), the band is perfect for the set of classic rock fans who can distinguish the songs of the individual Beatles (including Ringo Starr’s “Photograph,” “I Call Your Name”).

It seemed like the Fab Four’s music has left an indelible influence on Sobrepeña; “Fill Me Up,” the opening track on his debut CD “Russelution,” has traces of “Yellow Submarine.”

But another original, “Feel His Love,” reminded us of the melody in the Critters’ “Mr. Dieingly Sad.”

That’s not a bad thing, because most musicians, consciously or otherwise, tap their musical influences for inspiration.

Sobrepeña’s lyrics, meanwhile, have a spiritual bent. Is that because he is the son of a pastor? Whatever, we’re glad he’s now making music instead of slaving away in business.