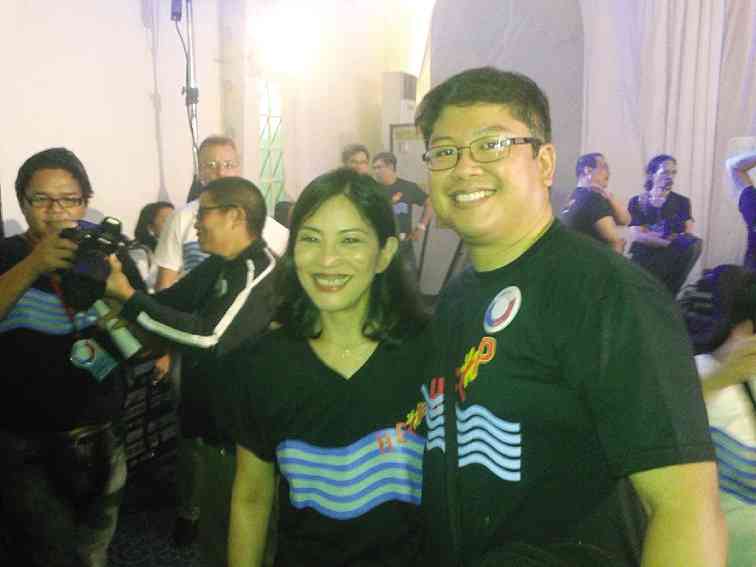 They came to help Supertyphoon “Yolanda” victims and to root for their favorite artists such as Lea Salonga and Martin Nievera.

Cecile Licad fans also came en masse, prepared to “tolerate” the “infractions” on classical music, all for the sake of helping the typhoon victims.

Ably directed by Gary Valenciano’s son Paolo, the concert dropped all dress code for its artists by letting them perform in “Jammin’ for Help” T-shirts with their respective repertoire.

The opening number, “One Voice,” rendered by the youngest singer, Fitri Cerado, was at once a big hit as she revealed secure vocal placement and a promising tessitura that took one’s breath away. She was even more revealing in her excellent duet with Nievera on “The Prayer.”

Salonga as singing actress is always a delight. She has expanded her repertoire beyond Broadway and other theater favorites, very much evident in her medley highlighted by “Windmills of Your Mind,” which took everyone to memory lane.

A heavy dose of fun and humor was provided by Nievera, who egged on the audience to join him in clapping as he sang one standard favorite after another. He serenaded every member of the audience from  front to last rows and did instant “selfies” with them.

He had a duet (“Kahit Isang Saglit”) with a good-looking American guest singer named Ryan Gallagher, and he kept reminding him not to look at him while singing.

One of the last numbers, Rachmaninoff’s Piano Concerto No. 2 in C Minor, Op. 18—performed by the ABS-CBN Philharmonic under Gerard Salonga, with Cecile Licad as soloist—was easily the big highlight of the evening.

The first movement recalled a coming storm with the bass chord sounding like ominous bell warnings. The agitated changing keys had the force and power of a storm surge, revealing an uncanny,  spontaneous and unbreakable rapport between soloist and conductor. The first part, ending in C minor fortissimo, drew premature applause from an excited audience.

There were many things going for everyone in the second movement (adagio sostenuto—più animato), which sounded like a sudden calm before the storm. But Licad made something highly spiritual out of it and sculpted the movement like a fleeting fervent prayer. As she ended  in E major, with the last notes seemingly floating away, you could hear a pin drop.

The last movement (allegro scherzando) provided a dramatic contrast, ending in C major. From the sheer lyricism of the second movement, Licad drew power and heart-stopping chords in the last movement, with the orchestra and conductor in close sync with the soloist.

Stunned by the performance, Salonga told Nievera and the audience: “Oh, my God! How can you match that finger freaking beast? I hope something still comes out from my voice.” Then she asked for one more round of applause for the pianist.

For one night, pop, Broadway and classical music happily co-existed

The concert will help raise more funds for the rehabilitation of typhoon-stricken cities in the Visayas.

Described by Herbert Von Karajan as “The Voice from Above,” the Grammy-winning South Korean lyric coloratura soprano is known for her interpretations of the bel canto repertoire. She is based in Rome where she performs in Italian opera houses.

Sumi may be familiar to Filipino fans of K-pop (Korean pop) music since she recently made news when she held her annual concert in Seoul, “Fantasia,” in which she invited Yang Yoseob, the baby-faced main vocalist of top K-pop idol band Beast, to do a duet with her.

The duet combined her bel canto classical singing style with the youthful Yoseob’s honey-sweet but powerful and versatile vocals which has impressed Billboard magazine and critics as well as earned him and Beast legions of fans from around the world.