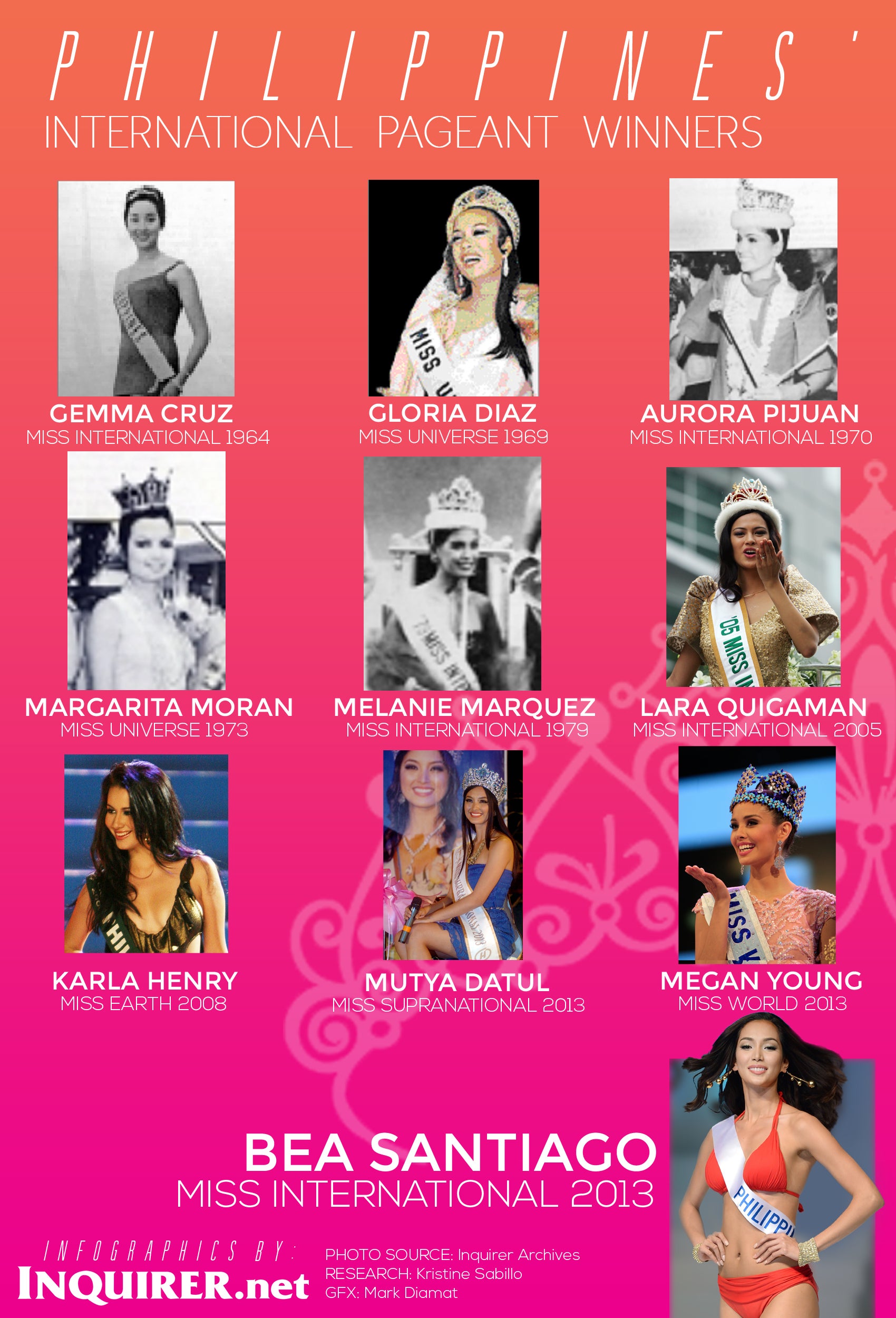 Five winners of the Bb. Pilipinas beauty pageant visited the INQUIRER.net offices earlier this year. Two of them shown in this video eventually went on to win the international pageants they participated in—Bea Rose Santiago as Miss International and Mutya Johanna Datul as Miss Supranational. Ariella Arida won as 3rd runner up in the Miss Universe pageant. Another Filipina, Megan Young, won the Miss World crown. VIDEO by INQUIRER.net

The Masbate-born international model bested 66 other contestants in the competition’s 53rd edition, held at Shinagawa Prince Hotel Hall in Tokyo.

In September, two Filipino beauties won honors for the country: Mutya Datul in the Miss Supranational contest in Belarus and Megan Young in the Miss World pageant in Indonesia.

The Philippines has been most successful in the Miss International beauty pageant in the major international competitions, winning five times.

On the eve of the pageant, Santiago posted on her Twitter account (@bearose21): “Lord bless me! Give me confidence and strength for tomorrow. I want to give a Merry Christmas to the Philippines.”

During the final round of the competition, where the five finalists delivered their messages, Santiago said that if she became the next Miss International, she would “uphold international camaraderie and international sympathy. I will continue the message of hope. Whatever calamity may come to us, as long as we have each other, there will be hope.”

Santiago earned the right to represent the country in the global tilt when she won the Bb. Pilipinas-International crown in the 50th edition of the Binibing Pilipinas pageant in April. There, she was also proclaimed Bb. Avon.

Hirofumi Hashimoto, president of the International Cultural Association of Japan, which organizes the Miss International pageant, was one of the judges in the national contest. He also assisted in awarding Santiago her local title.

As an international ramp model, Santiago was a stranger in the pageant circuit. Beauty-queen maker and renowned fashion designer Renee Salud plucked her out of the fashion industry and encouraged her to give beauty tilts a shot.

Salud, who also discovered and mentored Marquez, said Santiago’s modeling background gave her an advantage in the Miss International the pageant.

“She’s already adept on the ramp, just like Melanie. You know what, she’s my second Melanie Marquez,” Salud told the Inquirer in a phone interview.

The fashion designer said Santiago tried to please everybody and never intended to cause any ill feelings from others.

“She always exerted effort to meet me, she never forgets,” Salud said.

Before she left for the competition, Santiago said she would offer her quest for the title to the survivors of Supertyphoon “Yolanda.”

She told the Inquirer that when she met some teachers who came from the areas devastated by the typhoon, she felt thrilled to bring them happiness with just her presence.

“They were smiling when they saw us. And a simple hug brought them joy. It just gave more sense to my fight for the Miss International crown. I’m going to get that crown for them, for all Filipinos, to give them a reason to be happy even if the situation they are in right now seems bleak,” she said.

Santiago is expected to return to the Philippines next week, after a series of commitments with the organizers in Japan.