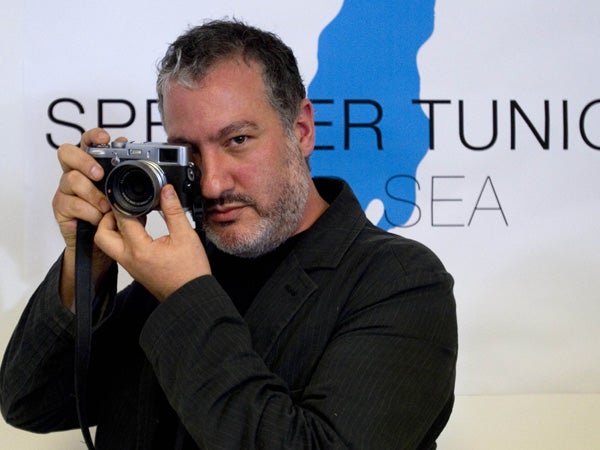 US art photographer Spencer Tunick checks a camera during a press conference in Tel Aviv ahead of his trademark mass shoots of naked volunteers, this time at Israel's Dead Sea shoreline on September 17. AFP

DEAD SEA—US photographer Spencer Tunick is staging one of his trademark mass studies of nude volunteers on Saturday, with a thousand Israelis posing on a private Dead Sea beach.

The shoot is part of a bid to boost Israel’s campaign to have the salt-saturated feature recognized as one of the world’s seven natural wonders in a global online vote in November.

Experts warn that the Dead Sea could dry out by 2050 unless urgent steps are taken to halt its demise.

For Tunick, a Jewish American who has arranged naked human bodies over prominent landscapes and landmarks ranging from a Swiss glacier to the Sydney Opera House, a nude installation is an indicator of a host country’s openness.

“For me, a country that allows the nude in art, in public space is some place that’s very progressive, very open, and very caring, and very dignified.”

Orthodox Jewish politicians and rabbis have protested over what they termed the “Sodom and Gomorrah” nature of Tunick’s work, and threatened to take legal action against the plan to strip in public.

The head of the local council in which the early-morning photo session installation was taking place threatened to call police to disperse the shoot, which he said was offensive to the local residents and lacked a police permit.

But a police spokesman told Agence France-Presse there was no need for a permit, nor was the event considered public, as it is being held on private property.