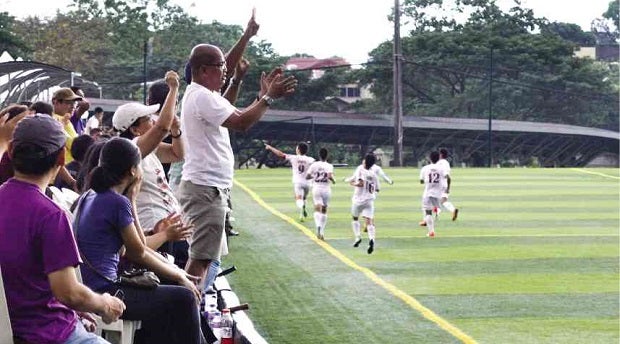 FANS cheering for the UP team

College basketball, and recently, volleyball, have been enjoying immense popularity in the Philippines, thanks to the University Athletics Association of the Philippines (UAAP).

Football is afforded a lot of media exposure, given the weekly live telecast of games in the spanking-new Far Eastern University (FEU)-Diliman Football field.

According to FEU’s assistant athletic director Bong Arroyo, the school’s football field is a FIFA-recommended artificial grass pitch that is 68-meter wide and 105-meter long, with a 2.5 to 3-meter runoff on all sides. It is oriented north to south to minimize the glare of the sun on either team playing on the field.

It was laid over a network of HDPE perforated pipes for vertical drainage through the turf pores, and groomed with a one-percent slope leading to perimeter canals for horizontal surface drainage.

It can handle drizzles and light rain without any interruption to games or practices. For heavy downpour or continuous rain beyond 20 minutes, the pitch has been observed to be playable within one to 1.5 hours after the rain stops.

The artificial grass is a 50-millimeter high diamond monofilament turf supplied by AVGras, the same supplier of the artificial training pitches of the recent Beijing Olympic Games, the Guangzhou Asian Games and the Shenzhen World Universiade.

The infill used includes white silica sand for overall weight and stability, and beige and green cool rubber granules for cushioning, roll and ball bounce, filling up to 66-80 percent of the pile height, sourced through Sports Technologies Inc. of Australia.

FEU Diliman is a Kinder to Grade 12 (K12) school that also offers college courses such as business, IT and accountancy.

Situated in a 10-hectare area, FEU Diliman is a green school with an environment conducive to learning and sports training. It has 66 airconditioned classrooms, two libraries, a school auditorium, free WiFi service for students and a top-of-the-line football field and sports center.

The UAAP recently moved all football games for the 2013-2014 season to FEU Diliman. Midway through the first round, players already have varying but mostly positive views on what it feels like to play on the field.

“The sizes of the grass fields are not consistent,” reigning women’s football MVP Barbie Sobredo of the FEU Lady Booters said.

Defender Francisco Jose Santos of the University of the Philippines (UP) Fighting Maroons added, “It is flatter than the other fields, so it is easier to play on and you get to experience better football.”

“If the field is nice, players get to play better, like the touches of the ball are all the same compared to other fields,” Season 75 Rookie of the Year Toni Nolasco of the De La Salle University (DLSU) Lady Booters added.

“I love the location regardless of how far it is from our campus (DLSU). Playing at FEU is such a relief because the air feels fresher and there are trees and the sky, instead of just buildings,” said another DLSU Lady Booter, Cara Abaya.

Nevertheless, Abaya is putting out some suggestions to help improve the field. According to her, the turf still has uneven spots, which means puddles form when it rains. Also, the shelter for the players and their belongings is limited.

Football is arguably the most popular sport in the world. A total of 207 men’s national teams are registered in the international circuit, compared to 127 and 85 for volleyball and basketball, respectively.

In the Philippines, basketball still rules. But changes have given college football athletes the exposure they have longed for. And should these players eventually play abroad, they can now experience what most fields are like outside the country.

“It’s encouraging; it can boost the energy of the players knowing that basketball is not the only sport televised today. Also, our parents in the province can see us play,” UE Red Warriors Striker Fitch Arboleda expressed.

“I think football will become more popular. Of course, the telecast has started this season so the Philippines will see what UAAP football is all about,” Season 75 Best Striker Jonjon Melliza of FEU Tamaraws said.

UP’s Santos is confident that, overall, more kids will be inspired to get into football. Having a better field to play will push all teams to improve and will result in better performances.

During the last season, crowd attendance at UAAP Volleyball shattered the records of past years. Hopefully, in a few years, UAAP football will enjoy the same following.