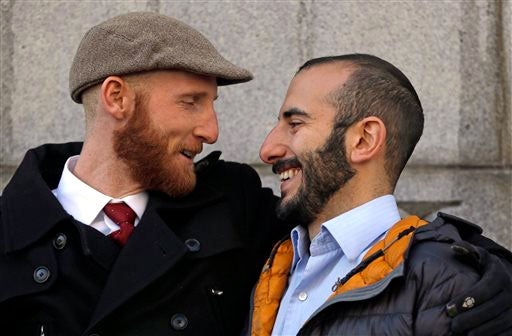 In this Dec. 4, 2013 file photo, Derek Kitchen, left, and his partner Moudi Sbeity look at each other following court in Salt Lake City. A challenge to Utah's same-sex marriage ban by three gay couples was back in court Dec. 4, as a federal court judge heard arguments. AP

SALT LAKE CITY — A federal judge struck down Utah’s same-sex marriage ban Friday in a decision that brings a growing shift toward allowing gay marriage to a conservative state where the Mormon church has long been against it.

The Salt Lake County clerk’s office started issuing marriage licenses to same-sex couples. Deputy Clerk Dahnelle Burton-Lee said the district attorney authorized her office to begin issuing the licenses but she couldn’t immediately say how many have been issued so far.

“In the absence of such evidence, the State’s unsupported fears and speculations are insufficient to justify the State’s refusal to dignify the family relationships of its gay and lesbian citizens,” Shelby wrote.

Ryan Bruckman, a spokesman for the Utah attorney general’s office, said the office will appeal the ruling and is asking for a stay that would stop marriage licenses from being issued to same-sex couples in the meantime.

Meanwhile, dozens of same-sex couples lined up to get marriage licenses at the Salt Lake County clerk’s office. State Sen. Jim Dabakis, chairman of the Utah Democratic Party, was there with his longtime partner, Stephen Justesen.

“I waited 27 years,” Dabakis said. “We didn’t want to get married until we could get married in Utah.”

Dabakis said people were rushing to get marriage licenses, fearing that the state will win a court order blocking them from being issued.

During a nearly four-hour hearing earlier this month in Salt Lake City, attorneys for the state argued that Utah’s law promotes the state’s interest in “responsible procreation” and the “optimal mode of child-rearing.” They also asserted it is not the courts’ role to determine how a state defines marriage, and that the U.S. Supreme Court’s ruling last summer that struck down part of the Defense of Marriage Act doesn’t give same-sex couples the universal right to marry.

Utah’s lawsuit was brought by three gay and lesbian couples. One of the couples was legally married in Iowa and just wants that license recognized in Utah.

Many similar challenges to same-sex marriage bans are pending in other states, but the Utah case has been closely watched because of the state’s history of staunch opposition to gay marriage as the home of The Church of Jesus Christ of Latter-day Saints.

The church said in a statement Friday that it stands by its support for “traditional marriage.”

“We continue to believe that voters in Utah did the right thing by providing clear direction in the state constitution that marriage should be between a man and a woman, and we are hopeful that this view will be validated by a higher court,” the church said.

During this month’s hearing, Tomsic contended marriage is a fundamental right protected by the U.S. Constitution. She said the case embodies the civil rights movement of our time, saying discrimination has gone on long enough.

She said Utah’s law, which passed with two-thirds of the vote, is “based on prejudice and bias that is religiously grounded in this state.”

In the ruling, Shelby wrote that the right to marry is a fundamental right protected by the U.S. Constitution.

“These rights would be meaningless if the Constitution did not also prevent the government from interfering with the intensely personal choices an individual makes when that person decides to make a solemn commitment to another human being,” Shelby wrote.

Gay marriage on the front page

Catholic Church has no problem with marriage between gay man, lesbian

Illinois same-sex couple set to be first to wed