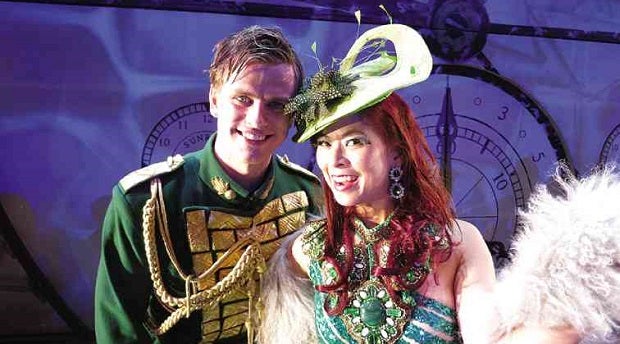 Have a very ‘Wicked’ Christmas!

Have you been wicked or nice?

After enjoying a grand trip to New Zealand to watch the musical “Wicked” last October, I decided to make our family’s Christmas theme using the rich colors of the Emerald City.

Armed with my bags full of Ozmopolitan outfits, I flew to Auckland with other members of the Philippine press to catch “Wicked” at the Civic Theater. The Australian cast performing in New Zealand is the same group that will be coming to enchant the Philippine audiences when the Manila season starts on Jan. 22, 2014.

“Wicked” is the untold tale of the Witches of Oz. It is a dazzling reimagining of L. Frank Baum’s stories and characters in his book “The Wonderful Wizard of Oz.”

Long before Dorothy drops in, two other girls meet in the Land of Oz. One, born with emerald green skin, is smart, fiery and misunderstood. The other is beautiful, ambitious and very popular. “Wicked” tells the story of their remarkable odyssey, how these two unlikely friends grow to become the Wicked Witch of the West and Glinda the Good.

The truly enjoyable show had me channeling Glinda the Good with all her charm and glitter. At the one-on-one interview the next day, Glinda star Suzie Mathers told me that she is excited to see my costume when they come to perform in the Philippines.

At the Auckland show, I was in a glittery green gown with matching feathers and green false eyelashes. Suzie and I are Instagram friends, so I am looking forward to posting pictures with her in January.

The one-of-a-kind musical features an astounding display of glitz, glamour and entrancing special effects, not to mention Grammy Award-winning music and lyrics by Stephen Schwartz. Over 200 costumes were designed by Tony Award-winner and incredible designer Susan Hilferty, most of which have incredibly intricate details, and conjure up the fantastic world of Oz in an amazingly dazzling display.

With some cast members making up to eight costume changes, and sets by Tony Award-winner Eugene Lee that feature a myriad of moving parts and stunning flying effects, “Wicked” is not to be missed.

I was in costume heaven at the backstage tour where all the versions of green ruffles and massive wigs were displayed. Next to the crates of costumes was the makeup section. The all-essential green makeup is a special shade, made by MAC Cosmetics Chromacake.

The heroine Elphaba Thropp is all covered in green throughout the show and is truly amazing. The bright green witch has the most stunts and maneuvers, and, through it all, her makeup never bleeds.

The book tells the story of the many obstacles a family has to go through as they embark on a bear hunt. has won over 50 major awards, including a Grammy, three Tony Awards and six Helpmann Awards. It has been Broadway’s no. 1 show for an unprecedented nine consecutive years and has thrilled over 37 million viewers worldwide over the last decade.

Meeting the cast right after the show was exciting. Aside from Suzie, I met Jay Laga’aia, the Wizard himself; Steve Danielsen, who plays Fiyero the playboy Prince; Maggie Kirkpatrick, who plays Madame Morrible the headmistress of Shiz University; Edward Grey, who plays Boq the munchkin; Emily Cascarino, who plays Nessarose, Elphaba’s lonely, younger beautiful sister; and Glen Hogstrom, who plays Doctor Dillamond and doubles up as the staging supervisor of the musical.

It all comes to life when “Wicked” casts its spell on Manila next year. I can’t wait to see how the CCP Main Theater will be transformed. The Philippine season, from Jan. 22-Feb. 23, is produced by Marc Platt, David Stone, Universal Pictures, The Araca Group, Jon B. Platt and John Frost. Presented by Lunchbox Theatrical Productions, David Atkins Enterprises, 105.9 Radio High and Concertus.

Just a quick segue, but Radio High 105.9 FM is also starting “105 Hours of Christmas” today. You can listen to Christmas music on the radio to add ambience to all your holiday treats.

TicketWorld is also proud to offer Emerald Evenings, a special package available upon request for corporate clientele, inclusive of cocktails and snacks before the start of the show.

“Wicked” is also raising funds for Supretyphoon “Yolanda” victims. The local promoters of the Broadway musical phenomenon have announced that the 1:30 p.m. show on Jan. 31 will be geared for the charities working in those affected areas. Indeed the entire cast has been thinking of Yolanda.

“You are constantly in our thoughts and prayers during this difficult time. We’re sending you all our love and strength,” were statements from leading ladies Jemma Rix and Suzie. And Wizard Jay Laga’aia said, “I would like to add my voice to the many who are wishing you a speedy recovery, not only of the country, but also of your spirit.”

Apart from being enthralled by the musical extravaganza that is “Wicked,” I also got to see what else New Zealand has to offer. We took part in a sheep-shearing tour, which gave us an inside look at how sheep are prepped and then sheared to give us their wonderful wool.

Also part of the trip to Kiwi Land was the visit to the magnificent place of Hobbiton, which was used as the location for the Shire in the Lord of the Rings movie series.

My eyes and ears were satiated by my experience in New Zealand. The people, the places, the food, and everything in it make it a place worth going to more than once in your life.

The only thing I would change from my trip would be the length of my stay. There are still so many places I need to see and adventures yet to be had. But I will leave all that for another column.

For now, have a very “Wicked” Christmas!