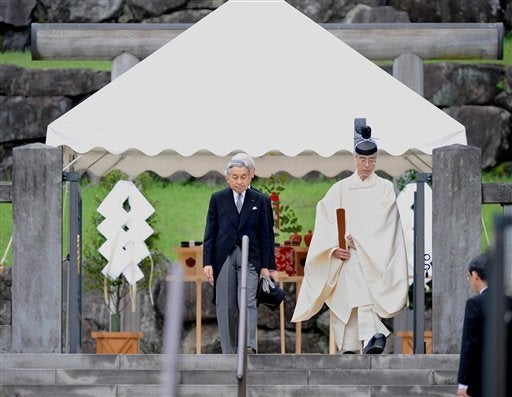 Japanese Emperor Akihito, center, is led by a Shinto priest when he visits the tomb of his late father Emperor Hirohito at the Musashino Mausoleum in Hachioji in the western suburbs of Tokyo. AP FILE PHOTO

TOKYO — Japan’s emperor Akihito surprised the nation last month when palace officials announced plans for his funeral. His wishes for a relatively modest one — and the act of

planning ahead — were widely seen as a good example in this rapidly aging country.

Akihito, turning 80 on Monday, is still active, making an official visit to India in November with his wife, the 79-year-old Empress Michiko. But concerns have grown since he had heart bypass surgery nearly two years ago on top of prostate cancer earlier.

After an expert panel discussion for more than a year, the palace announced that Akihito will be cremated, and his remains placed in a mausoleum smaller than those of his predecessors, with Michiko’s by his side at the Imperial compound in western Tokyo. Akihito’s cremation breaks a 400-year burial custom of the world’s oldest monarchy, as he wishes to trim cost, space and burden on the people, officials said.

The revelation of the couple’s life-end plans was well received in the world’s fastest graying nation, where 20 years from now one in three people will be senior citizens. Eroding traditions and changing demographics mean many of them lack younger relatives to look after their affairs or their graves.

“I really empathize with their feelings,” said Setsuko Imamura, a former part-time kimono-dressing instructor who turned 79 this month. “We cannot simply compare the imperial couple’s situation with us commoners, but their concerns make sense.”

Imamura has been planning for her life’s end for some time. A year after her husband died of cancer in 2010, she sold their house in Hamamatsu in central Japan, and moved to a retirement home in western Tokyo, near her niece. She has sorted out her finances, written a will and selected her favorite kimono for her burial, all kept in a box. She doesn’t want a ceremony.

Now, she is trying to reserve a spot in a group tomb, which would cost 300,000 yen ($2,900) per participant. That way her remains wouldn’t be abandoned, and disposed of as waste. And someone, living members of the group or their relatives, would visit the tomb and lay flowers.

“My husband and I didn’t have children, so we had agreed not to leave anything behind, and that’s how I want to live through the end,” she said. “I don’t want to trouble anyone.”

Imamura represents a growing segment of Japan’s expanding elderly population, particularly women who often outlive their husbands and are likely to die alone with no one to arrange their funeral or settle their affairs.

A 2011 national survey by Ibaraki Christian University sociology professor Kenji Mori showed only about 60 percent of Japanese had a gravesite with relatives to take care of it. The majority considered funeral ceremonies an obligation, and about 40 percent worried the arrangements would cause trouble for relatives and neighbors.

More and more Japanese in their 60s and 70s are planning for their own deaths, just like Akihito and Michiko. A majority in Mori’s survey said funeral ceremonies should reflect the wishes of the dead, a new way of thinking encouraged by companies in the now-booming “end-of-life” business.

Funerals used to be send-off rituals conducted by neighbors or families of the dead, but now the rituals are affected by business incentives and have lost their traditional meaning, Mori said.

Toshiko Sasaki, an executive at the Institute of Community Association Network, which runs retirement facilities and aging society research, said Japan’s rapid aging, low birthrate and weakening community and family ties have caused many elderly people to feel isolated and abandoned. Well into the second half of the 20th century, the oldest son, even after marriage, often lived with his parents until their death.

“Family ties have changed so much,” Sasaki said. “People now consider funerals and graves should reflect their own thoughts rather than for families or ancestors.”

Books on how to write “ending notes” have become best-sellers and “ending activity” seminars abound, organized by funeral homes, tombstone stores and even supermarket chains, like Aeon Co. Cemetery tours are also available.

“Life after retirement is long and many people are healthy and active. I think they want to take care of their concerns early on so they can enjoy the rest of their lives without lingering uncertainty,” said Kazuhiro Yoshida, a spokesman for Aeon’s funeral-related services.

The 2008 Oscar-winning film “Departures,” about a man who prepares bodies for funerals, inspired many Japanese to think and talk more openly about the topic.

At the high-tech temple Daitokuin, where indoor graves are operated by Nichiryoku Co., visitors can pray for up to eight of their loved ones at one of about two dozen card-operated booths, each housing a tombstone with changing nameplates for each family.

Nichiryoku and other companies also provide an after-death house-cleaning service for people who die on their own. Masahiko Muraki, an executive of Nichiryoku, said he expects the need for the service would grow in coming years.

“People finally started realizing there is so much to do,” he said. “It’s not just about funeral and grave. We’re all responsible for deciding the process leading up to the end of our lives.”