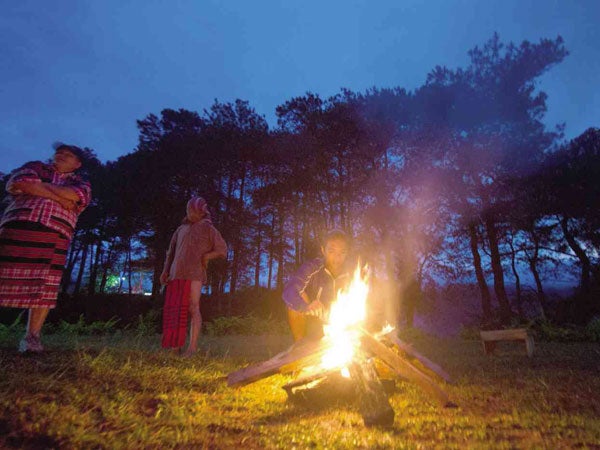 NIPPY UP THERE. Residents in the mining town of Mankayan in Benguet set up a bonfire as the temperature dropped to 14 degrees Celsius on Thursday night. It is, however, cooler in Baguio City and in other upland towns so that the familiar knitted Baguio bonnet, one of the summer capital's cheapest and popular souvenir items, has become in demand. RICHARD BALONGLONG/INQUIRER NORTHERN LUZON

BAGUIO CITY, Philippines—There’s no better time to use that familiar knitted Baguio bonnet, one of the summer capital’s cheapest and popular souvenir items, than now.

Whenever the city’s temperature drops to an average of 13 degrees Celsius in December, demand for these knitted bonnets from residents and tourists increases, making home-based knitters doubly busy.

Rose Fausto, 41, who has been knitting bonnets for the past five years, said she would usually earn double at the start of the cold spell.

“A knitter can make 30 bonnets a day at an average, and they just do these in their own homes. But during the Christmas season, this number doubles, some even make 80 to 100 pieces a day because of the demand. The knitters are usually mothers who have day jobs like me. I wash clothes for a living when bonnet sales are slow,” Fausto said.

She said wholesalers in the “Hangar” area at the Baguio public market have their own network of knitters, whose products they supply to areas frequented by tourists in the city, such as the Maharlika Livelihood Complex, market stalls and the city’s parks.

She said their products reach as far as the Visayas.

Paul Zapata, a worker at the Francing Yarns and Accessories, said aside from bonnets, yarns in various colors are knitted into cardigans and sweaters and sold in shops in the city and in Cebu province and the Bicol Region.

Fausto said that for 20 kg of yarn, a knitter can make 400 bonnets, and earn P3 for each item. A bonnet without design is sold for P25 by the wholesaler, while those with the “Baguio City” design cost more.

Souvenir shops usually sell a bonnet for P30 to P35 apiece or for P100 for a set of three bonnets.

While some bonnets have the phrase “Baguio City” knitted into the headpiece, other knitters use ready made patches sewn on the bonnet, according to Fausto.

“I am supposed to earn P4 a day but the P1 will have to go to the worker who sews the Baguio City patch on the bonnet,” she said.

Vendors in souvenir shops at the Maharlika Livelihood Center said bonnets, being cheaper than other souvenir items like shirts, shawls and sweaters could be sold easily.

“But we earn only P2 or P3 per bonnet, and we use the earnings to buy another set of products. But during Christmas season, we sell a lot of these because people need these to keep their heads warm,” Angelita Cantong, a souvenir shop owner at Maharlika, said.

“Through these bonnets, we can spot locals from tourists—many Baguio residents would never be caught wearing one of these while tourists proudly wear them,” Belen Rosales, another souvenir shop owner, said.

Alberto Soltoy, 55, a farmer, finds practical use for these knitted bonnets.

“I have two bonnets which I often use during Christmas season, and I often use them to protect my head from the cold. I am a farmer and I know many vegetable farmers who use bonnets whenever they go to other places in the Cordillera, such as Mt. Province, where it can be so cold during this season,” he said.

Erlyn Ruth Alcantara, a gallery curator, said hats were once part of the standard get-up of Baguio residents, as shown by city market photos from the early 1900s until the 1930s.

She cannot, however, say when bonnets became widely used in the city.

“My guess is that bonnets [were eventually used because these were] less expensive and warmer alternative to hats. Maybe bonnets were first introduced by American residents or were modeled from American military surplus bonnets sold in the Baguio market after 1914,” she said.