Ringing the bells of Bethlehem a fading tradition | Inquirer Lifestyle 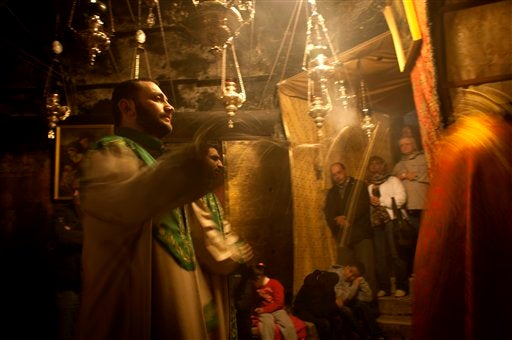 In this photo made Sunday Dec. 22, 2013, Armenian clergymen take part in the Sunday prayer services inside the Grotto, underneath the Church of the Nativity, in the West Bank city of Bethlehem. AP

Ringing the bells of Bethlehem a fading tradition

BETHLEHEM, West Bank — A Palestinian college student is one of the last keepers of a fading tradition — ringing the bells of Bethlehem.

Twice a week, Khadir Jaraiseh climbs to the roof of the Church of the Nativity, built over the grotto where tradition says Jesus was born. He pulls the ropes of four bells in a rooftop tower for a total of 33 times to symbolize the number of years Jesus was believed to have lived.

Jaraiseh rings the bells for prayer services of the Armenian Apostolic Church, one of three denominations that administer the basilica, one of Christianity’s holiest shrines. The Roman Catholic and Greek Orthodox denominations at the Nativity church — each of which has its own set of bells — have switched to automatic bell-ringing.

But there’s something special about the traditional approach, said Jaraiseh, who uses both hands and a floor pedal to pull the ropes.

“I feel like I’m making music and talking to God,” said the 22-year-old, who has worked at the church for four years and is studying to become a tourist guide. “There is nothing better than working in the place of Jesus’ birth.”

Jaraiseh rings the bells two days a week and an older colleague covers the remaining five days. During the Christmas season, his task is particularly enjoyable, he said.

His rooftop perch offers a view of old stone houses and cobblestone alleys in the center of Bethlehem.

On Sunday, patches of snow were left on rooftops, remnants of a rare snow storm that hit earlier this month. Much of the church was covered in scaffolding, as part of urgent repairs of a leaking roof — the first facelift in 600 years. Below, Manger Square was filled with tour groups, including visitors from India and Africa.

But the postcard-like vista is disrupted by a string of Israeli settlements and Israel’s West Bank separation barrier in the background. Around Bethlehem, the barrier is made up of ugly gray cement slabs, one of the many manifestations of the festering Israeli-Palestinian conflict. Israel portrays the barrier as a defense against militants, while Palestinians say it’s an excuse for another Israeli land grab.

The conflict is ever-present in the Palestinian territories, even during the Christmas season, though not always acutely felt. Tensions have dropped in recent years, the U.S. is making a new attempt to broker a peace deal, Bethlehem hotel rooms are booked through December and the number of visitors is rising steadily.

Jaraiseh said Christmas remains the highlight of his year despite the political situation. “We wait for it, it’s a happy day and we feel happy, regardless,” he said.

The Armenians mark Christmas on Jan. 19. The day before, Jaraiseh will ring the bells for longer, while the Christmas Eve procession of the Armenian patriarch makes its way into church. Though he is the bell-ringer for the Armenians, Jaraiseh is Roman Catholic and celebrates Christmas this week.

The Greek Orthodox switched to a computerized system after their bell ringer died a few years ago.

“We just press the button, without any need to go up to the roof in bad or good weather,” said Issa Talgiyeh, a Greek Orthodox priest. “This is much easier,” he said — though he acknowledged that the bells rung by hand sound more beautiful.

The Roman Catholics went the same route, using a generator to back up the system.

The Armenians initially had five bells that were installed in 1923. One was damaged during Israel’s 2002 siege of the church when Palestinian gunmen were holed up inside the shrine for 40 days.

“What if one day the computer (for the bells) doesn’t work or needs to be reset?” he said. “Would we skip the call to prayer?”

A perfect night for Mitch Valdes in Bethlehem