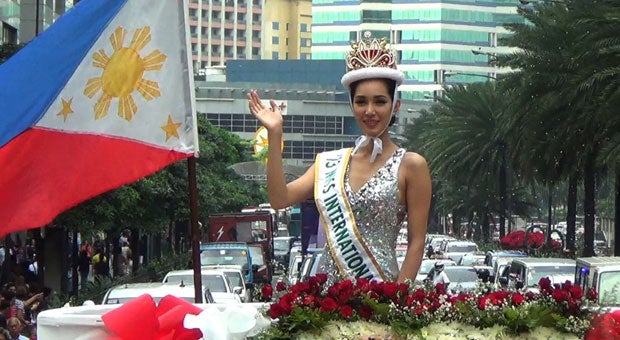 The 23-year old beauty queen, who bested 66 other delegates in this year’s Miss International pageant, also took “selfies” or pictures of herself during the parade, which commenced at the Buendia Makati Fire Station and ended at the Intercontinental Hotel on Ayala Avenue.

“Naiiyak ako (I feel like crying),” she said as she thanked Metropolitan Manila Development Authority (MMDA) chairman Francis Tolentino after the event.

Santiago posted her photos on Instagram with the caption, “Thank you so much for my fairy tale-like parade! I cried.”

The MMDA made arrangements for the parade upon the request of the Binibining Pilipinas Charities, Inc.

The second leg of her victory parade will be held around Araneta Center in Cubao, Quezon City at 4 p.m. Friday.