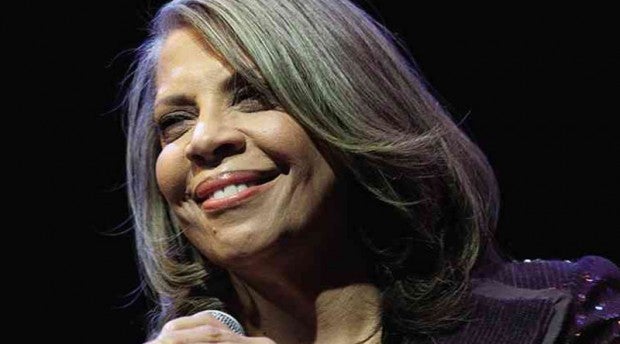 PATTI Austin: “My goal is to bring peace, joy and hope for a better future.” PHOTO BY ANDREA CANTER FROM PATTIAUSTIN.COM

Grammy-winning jazz artist Patti Austin arrived in Manila Saturday afternoon and proceeded to a studio in Makati City to rehearse for two benefit concerts for survivors of Supertyphoon “Yolanda.”

The first show, “Brand New Day,” will be held Sunday night in the grand ballroom of Solaire Resort and Casino in Parañaque City. It will feature Austin performing along with guest Filipino singers Lea Salonga, Martin Nievera and Richard Merk.

The second show, “One Heart, One Voice,” is scheduled for Dec. 31 at the grand ballroom of the Fairmont Makati hotel.

The charity events—with tickets priced at P3,000 to P10,000—are supported by a number of top Philippine corporations, with Habitat for Humanity as the lead organization that will handle the proceeds intended to rebuild homes for displaced residents of Tacloban City and other communities ravaged by Yolanda (international name: Haiyan).

In an earlier interview with the Inquirer, Austin said Yolanda “affected me deeply because I have many Filipino friends, including those who live in America and who have families in the Philippines. These are people whom I care so much about.”

The New York-born Austin, who won best jazz vocal album for “Avant Gershwin” in the 50th Annual Grammy Awards in 2008 and was coproducer and one of more than 70 artists featured on “We Are the World: 25 for Haiti,” a charity single in aid of the 2010 Haiti earthquake, also told the Inquirer that she was helping the typhoon survivors with furnishings for their new homes.

“The house design will be provided by Habitat for Humanity. What I am bringing in are furnishings for the house interiors. My dear friend, Marguerite Lhuillier, who creates beautiful furniture at her factory in Cebu, has consented to work with me along with a marvelous designer, Butch Carungay. We will come up with a simple, comfortable, modular form of furniture that is cost-efficient. I hope that Habitat will like the idea,” she said.

“Eventually we’d like to manufacture these modular furniture for the public, with a percentage of sales to go to Habitat for the rehabilitation of the Visayas,” she said.

Austin’s concerts come on the heels of dozens of countless benefit shows that have been mounted by Filipino artists for survivors of Yolanda. And the efforts show no signs of stopping.

On Jan. 3, 2014, also in the Solaire ballroom, Side A, South Border and Freestyle—three Pinoy bands that achieved fame in the 1990s and continue to be popular with fans—will stage their own charity gig for the Visayas.

“This is our bayanihan spirit in action,” South Border cofounder and chief composer Jay Durias told the Inquirer.

Formed in Los Angeles, California, RHCP will join Australian electronic music duo Empire of the Sun, Danish pop group The Asteroids Galaxy Tour, American alternative rock band The Red Jumpsuit Apparatus, and dozens of local acts, including Up Dharma Down and Radioactive Sago Project, for the festival whose organizers announced that part of the two-night event’s proceeds will benefit typhoon survivors.

Meanwhile, two of the world’s greatest music artists of all time, The Beatles and Bob Dylan, have allowed their compositions, through their music publishers, to be rereleased for the album “Songs for the Philippines,” available on iTunes for $9.99. Part of the proceeds will go to the Yolanda relief efforts of the Philippine Red Cross.

The album is indeed star-studded. On its 39-track list are hits recorded by Madonna, U2, Bruno Mars, Beyonce, Eminem, Adele, Katy Perry, One Direction, Lady Gaga, Justin Timberlake and Justin Bieber, among other stars.

Album buyers will find many of the 39 tracks relevant to the Yolanda tragedy. But two songs stand out, The Beatles’ “Let It Be” and Dylan’s “Shelter from the Storm.”

Give me the night