Make way for the Year of the Horse! | Lifestyle.INQ ❮ ❯ 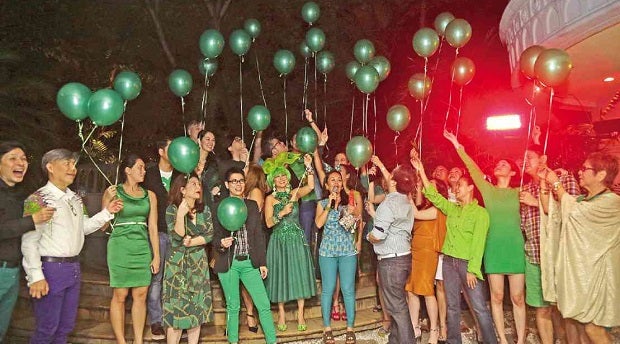 Make way for the Year of the Horse!

Thanks to Marites Allen, the feng shui expert and entrepreneur behind www.maritesallen.com, I have some advance tips on how to harness the coming auspicious energy for the New Year. She shared these tips at my annual Christmas party a few weeks ago.

We learned both favorable and unfavorable forecasts for the coming Chinese New Year. Two popular schools of feng shui, The Four Pillars Chart and the Flying Stars Chart, come into full play in “reading” how the five natural feng shui energies will affect human activities, from business to industry, government, career and other personal pursuits.

The shifting positions of these unseen energies, namely Fire, Water, Earth, Wood and Metal, have positive or negative effects on everyone. It is important for all of us to learn about these annual changes to derive the most benefits from the positive energies and to deflect the negative ones.

Marites excitedly informed us that the champion animal sign for next year is the Sheep, with all the lucky stars in this animal’s direction. These are people born in 2002, 1990, 1978, 1966 and every 12 years before those years. All aspects of love, wealth and health are stellar, and they will surely have a smashing year.

Close in second place are the signs of the Horse, Monkey and Rooster. The lucky directions are South and South West. Although the East has the Illness Star making the Rabbit prone to health problems, Marites suggests a cure—carrying a golden Wu Luo around to increase the life force. Thank goodness this is just a small figurine that can easily fit into a purse!

Earlier this month, Marites conducted her annual Feng Shui Updates at the F1 Hotel Manila in Bonifacio Global City.  She gave the forecast for each of the signs and the cures and remedies to help augment the negative energies.

To help usher in good luck as early as now, our party guests wrote their New Year’s wishes and resolutions on red balloons, which we then released into the night sky, while Marites chanted auspicious mantras. My balloon was covered with personal wishes and blessings for my family and our country.

This year has been filled with awesome travel adventures, and I wished to see more of the world in the coming year, especially with my husband, Dennis, as we celebrate 20 years of wedded bliss.

One of the trips that I really enjoyed was my first visit to New Zealand, to watch “Wicked The Musical.” Apart from watching the wonderful show, the Philippine press group visited Hobbiton, the movie set near Matamata in the North Island of New Zealand.

We discovered the real Middle Earth at Hobbiton, the movie set from “The Lord of the Rings” and “The Hobbit” film trilogies. The fascinating two-hour guided tour was on the most picturesque private farmland on rolling mountains and lakes. The set had been completely rebuilt for “The Hobbit,” and has remained as it was seen in the films and in “The Lord of the Rings” film trilogy.

Our media group included Tim Yap, Pepper Teehankee and Pam Pastor. We all took turns posing by the Hobbit Holes, The Green Dragon Inn and The Mill. A double-arched bridge on the property and many surrounding gardens are so pretty. Actress G Tongi also enjoyed the toasty fireplace and their famous beef and ale pie.

It was a marvel to watch “The Hobbit” and see many of the scenes shot in Hobbiton. Having been to the film set made it all the more familiar. A big thank you to Bookie Soliven, head of Warner Bros. Philippines, who invited us to the premiere in SM Mall of Asia Imax Theater.

Cosplayer Gerard Sison had the perfect costume as Thranduil, the Elvenking. Gerard also came in costume to the Bikram Yoga Christmas party at my home. Bikram Manila’s new owner, Olay Aninion, had our yoga classmates come in fairy shades of green to match the movie theme mixed with the “Wicked” musical.

Christmas is a time of tradition for me. Our family always has an annual family photo, usually to match our Christmas theme. Over the years, I’ve had them in African attire, Venetian masks and even French outfits.

This year, to the horror of the kids, they all had to dress in green to match our “Wicked” theme. They’re lucky that I did not insist on Oz attire as well, but I thought it would be best to scale down the frivolity, in light of the recent calamities in the country.

Anyway, green is the lucky color next year, so, as I like to say, “It’s all good!”

A big happy New Year to all and I wish you continued health and wealth next year.