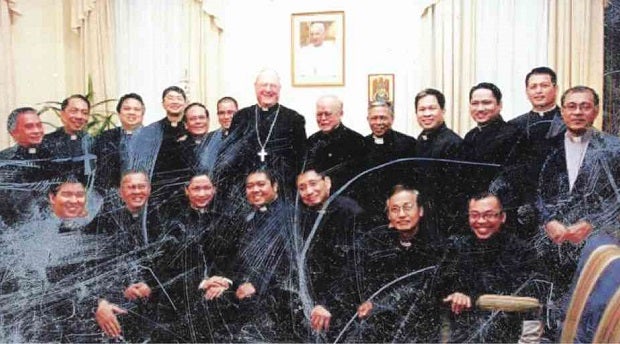 NEW YORK Cardinal Timothy Dolan (center, second row) with Filipino priests serving in the Archdiocese of New York, whom he invited for a lunch meeting on Dec. 5 to discuss the Supertyphoon “Yolanda” tragedy on Nov. 8.

Cardinal Timothy Dolan of the Archdiocese of New York met with 19 Filipino priests over lunch on Dec. 5 in his Madison Avenue residence to discuss how the priests in New York could help the Supertyphoon “Yolanda” victims.

Ron Lajoie reports that the priests also discussed the best way to provide aid. Some related stories of how their own families coped with the storm.

“Sometime we feel so helpless,” said Cardinal Dolan, referring to the scenes of devastation they’ve seen on TV. “But I thought at least I could get my priests here to tell me about it.”

For some priests, particularly those serving on Staten Island, it was the second time in just over a year they had to deal with a catastrophe of epic proportion. Hurricane Sandy, which hit Staten Island hard last fall, destroyed neighborhoods and affected parishioners.

“I work on Staten Island in Midland Beach, which was damaged last year by Sandy,  so I can relate very much to what’s going on there,” said Fr. Erno Diaz, administrator of St. Margaret Mary parish.

“Ninety-five percent of my parishioners were flooded. That’s why when they were talking about rehabilitation (in the Philippines) I can relate, because up to now we’re still rehabilitating (on Staten Island)!”

Father Erno, a native of Capiz and who has been propagating the devotion of San Lorenzo Ruiz in New York and in the East Coast since 1981, said he appreciated Cardinal Dolan’s deep concern and the invitation to lunch and to talk.

“That means so much to us,” he said. “It’s like a fatherly concern. That’s why I mentioned my brother. I didn’t want to mention it because it’s so personal. But he’s like a father to us,  so I thought it was okay.”

Father Erno’s brother in the Philippines barely survived the storm. He sought safety in the cane field for 12 hours at the height of the storm, braving 125 mph winds.

The priest and his family lost contact with him for 10 days.

Father Erno was a teacher at the St. Pius X Minor Seminary in Capiz, where he  also studied. The roof of the seminary was blown away during the storm.

“I called my family, they’re okay,” he told Cardinal Dolan. “But the news about the rest of the people is very sad. The population of the province is about 700,000 and about a half million were affected. It’s really a heart-breaking situation.”

Father Gonzales said he was concerned about the fate of the people on the smaller islands, who seem to have been overlooked in the relief efforts.

He thanked the cardinal for taking the time to meet with him and his brother priests from the Philippines.

Fr. Prex Fajardo, superior of the the Merciful Brothers of St. Joseph, will fly to Tacloban tomorrow and stay there until Jan. 6.

Father Prex and six brothers will stay in the convent of the Missionaries of Charity in Tacloban not so much  to bring relief goods, but more to serve.  The brothers will do carpentry work. Those who know how to  cook will serve in the soup kitchen.

Fr. Prex said, “I have two brothers who can do haircut.   I will say Mass, hear confessions and visit the sick. If there is any priest there who is tired, he can rest for awhile and I can take his place.”

In Manila, the Merciful Brothers of St. Joseph (MBSJ) work with the Missionaries of Charity by caring for their elderly and sick patients as training for their ministry.

They go to different areas in Quiapo and Quinta Market to conduct “Bibliarasal.”  They go to Don Bosco Center for studies, Cenacle Retreat House and Fr. Bobby Latorre, an Opus Dei priest, for formation.  The MBSJ gives Holy Communion at Quiapo Church during Masses.

Hyatt Regency Manila is  donating $25,000 to Room to Read, a nonprofit organization seeking to spread literacy in the developing world.

Ongoing at the Museo Diocesano de Pasig until Jan. 25, 2014 is an exhibit marking the 5th anniversary of the canonical coronation of the Immaculate Concepion at the Cathedral of Pasig.

The year 2013 is truly a Year of Faith as our faith was severely tested with the many tragedies that befell us this year.

Pope Francis told the Filipinos who gathered for the Holy Mass after the blessing of the mosaic image of San Pedro Calungsodlast Nov. 21 at the Basilica of St. Peter in Rome: “Don’t be afraid to ask God why?”

A Blessed New Year 2014 to you, dear readers. May God bless all of you  with good health and protection.