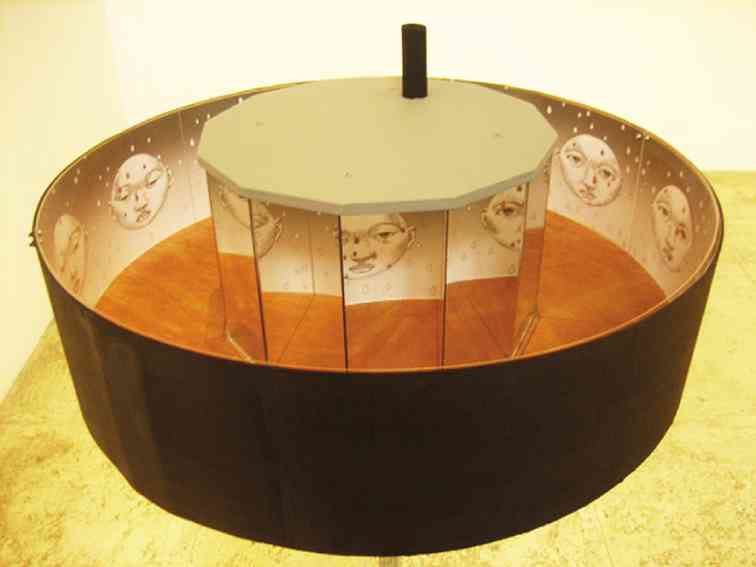 “I COLOR the Rain,” praxinoscope made of printed drawings, mirrors, wood andmetal

Artist Mark Justiniani is an interesting person to talk to. Unlike other artists who find it difficult to talk about their work, preferring the pieces to speak for themselves, Justiniani is willing to engage people in conversation.

This was first apparent when I introduced myself to him at Art Fair Philippines earlier this year. One of his pieces titled “Mimefield” was a two-foot tall wooden box people could peer into and “see” a 30-ft mine shaft going deep into the ground.
Using strategically placed lights and mirrors, he was able to create the illusion of depth which left many people dizzy, befuddled or amused.

Although he had never met me before, he talked at length about the piece, and why he wanted people to talk about how it made them feel, because it eventually led to the bigger questions about what was real and what wasn’t.

This desire to engage viewers continues in his ongoing exhibit “Tila” at  Pintô Art Gallery in Antipolo City. For this exhibit, ongoing  until January, Justiniani created a pasilio or corridor of mirrors that is actually just two-feet deep. Visitors to the gallery can stand—or in one case, even do a handstand—in the corridor and see his or her reflection repeated countless times.

“I’ve actually been working with mirrors for a long time, maybe since 1994. It started with language, flipped or repeated words. Siksik, saksak and suksok imply addition; while kiskis, kaskas and kuskos refer to a subtraction, the shaving away of something,” Justiniani said in an interview with Inquirer Lifestyle recently.

The artist said his interest in wordplay involving anagrams and palindromes started when he looked at the painted words found inside jeepneys.

“This led to my use of mirrors, which are  two-dimensional but carry or reflect three-dimensional objects. A mirror is one of few materials that goes beyond its limitations.”

For the exhibit, Justiniani created his own praxinoscopes, animation devices invented in France in 1877 that use mirrors to give the illusion of movement. One of them even references a line from the song “Across the Universe” by the Beatles that goes: “Words are flowing out like endless rain into a paper cup.”

Justiniani has included several resin pieces that capture a particular moment in time like the splash a drop makes on a pool of water.

It is his continued use of mirrors, however, that intrigues. “Most of what you’re looking at is not there. I just supply a fragment, and you can already interact with it. If you can imagine things with this fragment, what more if you are given the entire thing?”

I was reminded of Plato’s parable of the cave—college Philosophy—and how what we see and experience in this world is just a shadow of the real thing.

“Yes, that’s one of the big questions of Philosophy. Some people arrive at these questions if they engage with the piece long enough,” Justiniani said.

Prepare to spend an hour or two if you intend to visit.