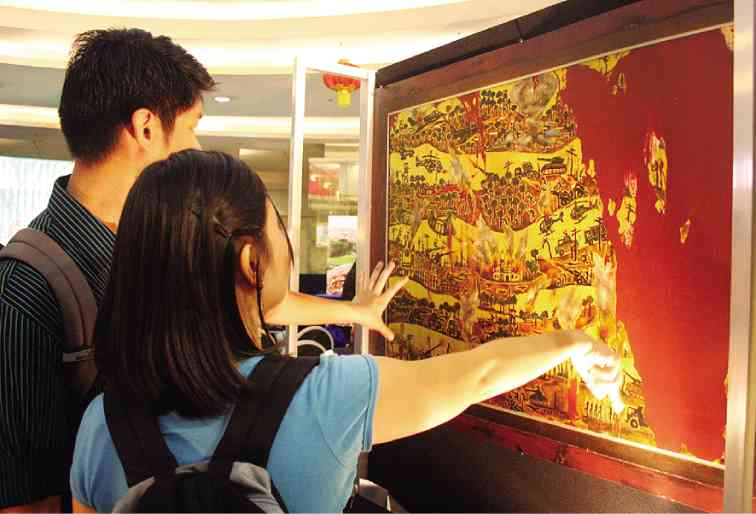 EXHIBIT on architectural motifs, part of Architext, one of the programs of the 2014 Philippine Art Festival

In celebration of the National Arts Month (NAM), the National Commission for Culture and the Arts (NCCA) will hold Cinema Rehiyon in Cagayan de Oro City on Feb. 19-22. This is one of the seven flagship programs during the Philippine Arts Festival (PAF) of NCCA.

Now on its sixth installment, Cinema Rehiyon is the flagship project of the National Committee on the Cinema of the NCCA Subcommissionb on the Arts.

With film scholar and Manunuri ng Pelikulang Pilipino member Miguel Rapatan as festival director, Cinema Rehiyon will have screenings and forums that will focus on the film productions from the regions.
Independent filmmakers from Baguio, Pampanga, Calabarzon, Naga, Bacolod, Cebu, Davao, General Santos, Zamboanga City will showcase their latest films. Film curators, festival programmers, and film enthusiasts will be in attendance.

The festival seeks to educate audiences on regional works that exist outside of mainstream cinema, and to promote discussion between film enthusiasts and artists.

The Philippines celebrates NAM in February since the signing of Presidential Proclamation 683 in 1991. As the country’s main agency for the arts and culture, the NCCA, headed by Felipe de Leon Jr., leads in celebrating NAM with the Philippine Arts Festival.

For 2014, the theme of  PAF is “Art on the Edge,” highlighting   advancements achieved in different art forms and  artistic creations outside of Metro Manila.

Spearheaded by the NCCA’s Subcommission on the Arts, PAF consists of the flagship projects of the seven committees of the subcommission—architecture, cinema, dance, literature, music, theater, and the visual arts. It aims to highlight the artistic talent and brilliance of the Filipino people.
Initially centering around the National Capital Region, PAF activities will be held all over the country to reach as many people as possible.

Meanwhile, the flagship project of the NCCA National Committee on Architecture is Archi[types/texts], a series of exhibitions, conferences, lectures and competitions on Philippine architecture and allied arts.

Archi[types/texts] is led by architect and teacher Gerard Lico.

The exhibitions and lectures will focus on Philippine landscapes, production spaces and notable sites in the country. This project aims to educate the Filipino people, especially the youth, on the architectural diversity of the country.

Now on its 11th year, Sayaw Pinoy is the flagship program of the NCCA’s National Committee on Dance. Festival director is Shirley Halili-Cruz. It features the gamut of dance forms with emphasis on indigenous and cultural dances. It will tour several cities and towns around the country.