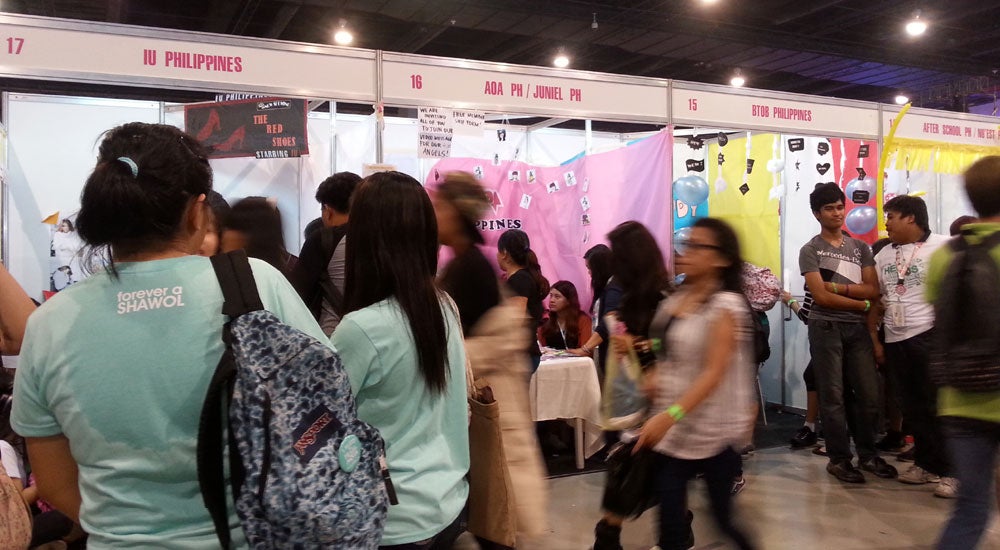 MANILA, Philippines—While international K-pop fans in other parts of the world awaited the yearend specials of big Korean networks, Filipino K-pop fans donned their best K-pop paraphernalia and Korean-inspired fashion outfit on a bright Saturday for the most awaited annual K-pop event in Manila.

On Dec. 28, 2013, K-pop fans from all walks of life flocked early to the SM Mall of Asia SMX Convention Halls 1 and 2, to take a chance at the first-come, first-served selling of limited General Admission and Booths Only tickets. All they wanted was to get the best view in the General Admission area for the concert part of the event. Other fans just wanted to be the first to enter the other venue, where  K-pop items were on sale, lest others before them gobble up the choice merchandise.

‘A world where we belong’

Massive crowds of fans overflowed inside the SMX convention halls.

In the first hall, swarms of attendees cluttered alongside the railings of the main stage and screamed at the top of their lungs when their favorite Korean boy groups performed.

Some other fans, in the other hall, enjoyed fun activities and ogled at and bought K-pop items that PKCI-affiliated fan-club and K-pop merchandise booths offered.

One fan, in particular, said that she and her friend were after the K-pop item-laden booths.

Clarissa Garcia shared that they wanted to check out the different K-pop merchandise of their favorite groups and to possibly buy those items.

She added that it was fun to attend the convention, especially for first-timers like them, seeing a wide variety of K-pop items.

Her friend Alyssa Mae Sarmiento, on the other hand, said that going to the convention was less time-consuming than shopping online wherein you still have to pay the shipping fee.

“Dito, kahit na gagastos ka rin naman sa pagkain, tapos transportation, sulit naman. Kasi ang dami mong nakaka spazz. Nakakatuwa kasi; nakaka-overwhelm lang na parang (medyo) di naman kami nag-iisa sa mundo (Even though we still have to buy our food, and then pay for our transportation, I think being here was worth it, especially since you can fangirl with others. I’m thrilled; I find it overwhelming that it seemed we were not the only ones in this world),” Sarmiento elaborated why it was fun at the event.

Noticeably, somewhere around the entrance and exit, fans also seemed to take the event as a chance to meet with their co-K-pop friends.  They sat and conversed about K-pop and their favorite groups.

PKCI Core staff Paola Ebora stated that for the 5th Philippine K-pop convention, other than the previously setup of over 60 PKCI-affiliated fanclub activity booths and over 60 K-pop merchandise booths, there was a two-hall, two-stage setup wherein the main stage held various performances and contests (such as the Dance Battle Year, Singing Star, and Idol Look-Alike), a special runway show, and the second stage held the free Korean classes and seminars.

Ebora also added that for this year, four stunning Korean boy groups—namely A.Cian, LC9, Lunafly and main act, Boyfriend—were brought by PKCI through the help of Pulp Live Productions, Standard and other sponsors.

VVIP and VIP ticket holders were the lucky fans to have a chance to partake in games, high five event, meet and greet, and even a fansign from the Korean boy groups.

K-pop convention for a cause

The annual K-pop convention held during December was not entirely a K-pop gathering. It was also a fund-raising event for PKCI’s charitable partner organizations.

Ebora said that parts of the proceeds of the convention would go to such charitable institutions as Gawad Kalinga, the Philippine Animal Welfare Society, and PKCI’s chosen student beneficiaries.

The Philippine K-pop convention started as a small fund-raising event in Starmall Alabang in 2009, attracting a crowd of about 2,000. Since then it has drawn fans from all over the Philippines.