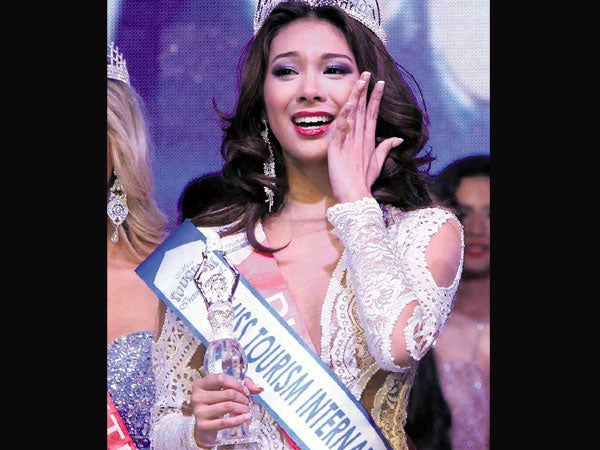 FOURTH CROWN Angeli Dione Gomez of the Philippines reacts after she was named the winner in the Miss Tourism International pageant in Kuala Lumpur, Malaysia, on New Year’s Eve, becoming the country’s fourth world beauty titlist in 2013. AP

International, besting 59 other candidates in a pageant held in Putrajaya, outside of Kuala Lumpur, Malaysia, on New Year’s Eve.

It was a back-to-back victory for the Philippines, as Gomez inherited the crown from fellow Cebuana Rizzini Alexis Gomez (they are not related), the 2012 winner.

In an earlier interview, Gomez said she had a hard time getting sponsors to help in her quest for an international beauty title, because almost everyone was focused on relief efforts for the survivors of Supertyphoon “Yolanda.”

“I didn’t bother to ask. That was tough. Thank goodness for the Mutya ng Pilipinas organization for helping me. Without them, preparing would be harder,” said Gomez, 20, who is from Toledo City.

Gomez, who majored in film at the International Academy of Film and Television in Mactan, Cebu, earned the right to represent the Philippines in the 2013/2014 Miss Tourism International pageant when she bagged the 2013 Mutya ng Pilipinas-Tourism crown in July.

She was also proclaimed Mutya ng Crimson in the national competition.

Before her Mutya stint, Gomez was crowned 2012 Reyna ng Aliwan in a competition showcasing the country’s different festivals. She placed fifth in the 2012 Miss Resorts World Manila contest and joined the 2013 Binibining Pilipinas pageant in April.

Gomez is the third Filipino to win the Malaysia-based Miss Tourism International pageant, now in its 17th year.

Her victory has made the Philippines the most successful country in the global tilt.

Maria Esperanza Manzano was the first Filipino to win the title in 2000.