London gets a taste of 2014 with flavored snow | Inquirer Lifestyle ❮ ❯ 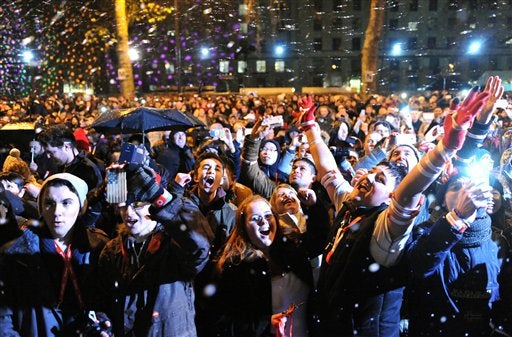 Thousands of people attending New Year’s Eve celebrations in London, United Kingdom, Tuesday Dec. 31, 2013 experienced the world's first multi-sensory fireworks display as Vodafone, in partnership with the Mayor of London, had created a spectacular display on the banks of the River Thames that they were able to taste and smell, as well as see and hear. New Year's Eve revelers could see, smell and taste clouds of apple, cherry and strawberry mist, peach snow, 'floating oranges' – thousands of enormous bubbles filled with Seville orange flavored smoke. (Richard Chambury/AP Images for Vodafone)

London gets a taste of 2014 with flavored snow

LONDON– Thousands of revellers got to taste the New Year celebrations in London when edible peach snow and strawberry mist descended on partygoers watching the midnight pyrotechnics.

Around 50,000 people took part in what was dubbed the “world’s first multi-sensory fireworks display”, poking their tongues out to catch the flavors designed to match the colors on show.

Bubbles of orange-scented smoke and apple and cherry mist were released into the air as the 11-minute firework salvo lit up the London Eye observation wheel.

“Amazing! It was phenomenal. It was really tasty with all those flavors coming in,” one reveller, Samantha from Peterborough in eastern England, told Sky News television.

The past year in Britain saw the death of 1980s prime minister Margaret Thatcher but also the birth of a new royal heir in Prince George and the first Wimbledon men’s singles tennis champion since 1936 in Andy Murray.

“There is no better way to celebrate the highs of 2013 and the start of an exciting New Year than by seeing one of the world’s most dazzling firework displays, now augmented in more ways than one,” said London Mayor Boris Johnson.

“A spectacular display of pyrotechnics that you can taste and even smell! Where else but London would you get such an experience?

“Watched by millions around the world, and hundreds of thousands of people from the banks of the Thames, it highlights our capital’s fantastic community spirit and its premier position on the global stage.”

Up to 100,000 people in key viewing areas by the River Thames got packs featuring scratch and sniff programs, LED wristbands and seven kinds of fruit-flavored sweets that linked to the show.

The wind and rain intensified shortly before midnight but it did not put off the predicted 250,000-strong crowd which waited for hours along the riverbanks to take in the event.

Cheers drifted across the city as the Houses of Parliament’s Big Ben bell chimed out the final seconds of 2013, before an estimated 12,000 fireworks sent 50,000 projectiles into the rainy night sky.