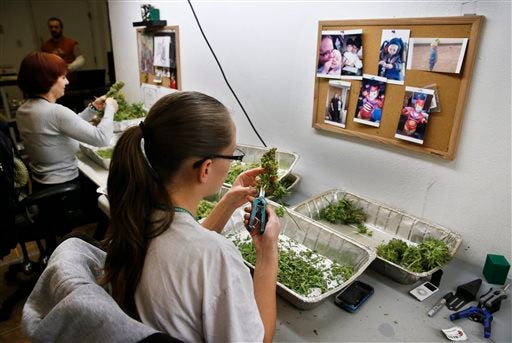 In this Dec. 27, 2013 photo, employees trim away leaves from pot plants, harvesting the plant's buds to be packaged and sold at Medicine Man marijuana dispensary, which is to open as a recreational retail outlet at the start of 2014, in Denver. Colorado is making final preparations for marijuana sales to begin Jan. 1, a day some are calling "Green Wednesday."(AP Photo/Brennan Linsley)

DENVER  — The new year may have arrived in Colorado, but the clock hasn’t ticked down yet on another milestone: the opening of the nation’s first recreational pot industry.’

Pot shops are opening at 8 a.m. Marijuana fans across Denver didn’t wait to celebrate the change on New Year’s Eve.

Many fired up bongs and water pipes and cheered at a “Prohibition Is Over” party. Across town, a dispensary was setting up a food truck and coffee service for campers awaiting recreational sales at 8 a.m.

Only adults 21 and over can buy marijuana.

Legalization critics warn that increased access will lead to an increase in drug abuse.