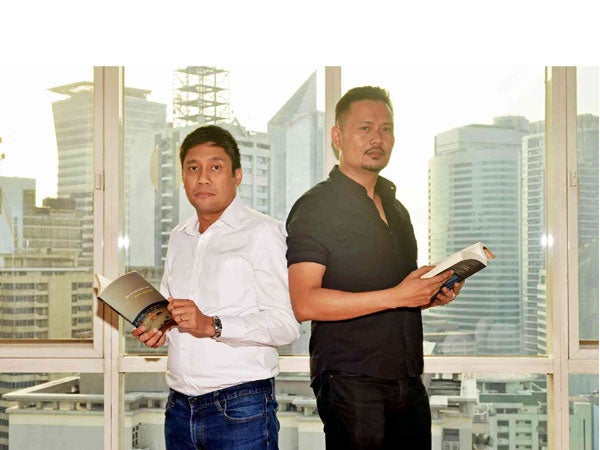 When you listen to Dean Francis Alfar and Angelo R. Lacuesta talk about the short story, it seems like it’s a precious metal that’s grown increasingly rare and harder to mine.

The two are long-time explorers of fiction in the short form, and have taken it upon themselves to shock the short story-writing community back to life.

“I’ve always had a thing for short stories,” Lacuesta explains. “I really love them.”

Alfar’s and Lacuesta’s big idea is a yearly selection of outstanding short stories, called “MAXIMUM VOLUME,” published by Anvil Publishing, Inc. The inaugural book, “MAXIMUM VOLUME: Best New Filipino Fiction 2014,” is due for release in February and, according to Alfar, is meant to “celebrate the best new Filipino fiction and encourage its writing.”

The first release is the culmination of months of work, years of experience and a life devoted to words.

Alfar, 45, started reading at a young age. “I began to write because I could not find enough of what I wanted to read,” he says. The speech and drama major at the University of the Philippines made a radical change in his life when he walked out of college and started working. “I wanted to assert my independence,” he says. After working for Dramatis Personae and Repertory Philippines, he left for Hong Kong and set up his own company, Kestrel DDM. Being a serial entrepreneur, he also set up smaller business ventures, among them Petty Pets, Binalot and a taxi franchise. “Basically, writing doesn’t pay the bills so you need to find something,” explains this recipient of ten Palanca Awards for Literature, including a grand prize for his novel “Salamanca.”

Alfar is also the outspoken force behind ten volumes of Philippine Speculative Fiction, what some people have described as science-fiction and fantasy.

Angelo “Sarge” Lacuesta, 43, is the son of venerable screenwriter Amado Lacuesta Jr., but says that his dad didn’t influence his writing as much as his milieu did.  It was more the mindset than the art.  The older Lacuesta wrote varied fare for the movies, from “Working Girls” (1984) to “Mumbaki” (1996). It was he who penned the famous haunted refrigerator tale in the original “Shake, Rattle and Roll” movie.  He died, at 49, in 1997.  “Writing was the easiest art to get into,” says the younger Lacuesta. “(In) filmmaking, you need money, which I didn’t have. By default, you become a writer first.”

Although he was accepted into UP’s prestigious accelerated Intarmed (Integrated Liberal-Arts Medicine) program, Lacuesta left medical school after a year. “I wanted to write and I didn’t think med school would give me that chance to write,” the four-time Palanca winner recalls. He plunged into the advertising industry and founded his own company, Logika.  He also worked as literary editor for the Philippines Free Press and is currently editor-at-large for Esquire Philippines.

They are both married to writers: Alfar to fictionist Nikki Go Alfar and Lacuesta to poet Mookie Katigbak-Lacuesta.

“It’s fantastic because I have an in-house editor,” Alfar says of Nikki, with whom he has two daughters, Sage, 11, and Rowan, 6.   “Seriously I think Nikki is a better writer than I am in many respects and without her, I wouldn’t be half the writer I am. We push each other to produce because production is so important to me. I believe a writer needs to be constantly producing and encouraging others to produce, hence all these activities and anthologies.”

Lacuesta, who has been married for only four years to Alfar’s 18, says his experience has been “different.”  Single for a long time, he devoted himself mainly to writing and his businesses until family matters took over when he got married and became the father of Lucas, 3. “I gladly give it my time because it gives back. I published my last book before I got married,” he says.

The two writers formed their own company called Logik, and it was during one of their many business meetings, in June 2013, that the concept for “MAXIMUM VOLUME” came together. “One thing just led to another organically and we thought, why not come up with a celebration of new fiction celebrating the younger writers,” Alfar remembers.  Despite their glowing credentials, they consider themselves part of the group. “It’s a mindset,” Alfar says. “I’ve always thought of myself as a young person.” Similarly, Lacuesta says he doesn’t consider himself as being “there yet” and has to keep toiling at his craft.

The twist to “MAXIMUM VOLUME” is that it features only stories by writers under 45. “We’d like to give younger writers an opportunity because, in all honesty, that’s where the future of our literature lies,” says Alfar. Lacuesta explains that so far, only the Philippine Graphic is left publishing locally-authored short stories regularly. “There’s really no other outlet,” he says. “It’s not like we’re coming in like messiahs or anything. Who else will do it? Who else is publishing these things? If I were born later, like if I were in my twenties now, where would I get published?”

The two also want to create a sanctuary for short stories, away from the fiercely contested writing contests. “We have too many competitions,” Lacuesta says. “Everybody is at each other’s throat or speculating that there’s politics behind (the choice of winners). I’ve judged for all these competitions. I feel that there has to be an outlet that’s not competitive in bad way.” The project is therefore an attempt at building community among writers, a legion of super-fictionists.

With the support of Anvil’s Publishing Manager Karina Bolasco who suggested that they make it a yearly series, the two called for short stories that were unpublished, original and in English. They received over 160 entries.

“The story has to be well-written and must give you a sense of the author’s voice. I’m looking for that unique kind of tone and the confidence,” says Alfar of the X-factor he was looking for.  “Very specifically, I was looking for a literary quality,” says Lacuesta.

“Maximum Volume” features the following stories: by “The Case of Two Husbands” by Heinz Lawrence Ang, “Posing” by Noelle Q. de Jesus, “The Other Woman Narrative” by Daryll Delgado, “Basta” by Glenn Diaz, “Journey Back to the Source” by Gino Dizon, “Man of Letters” by Marc Gaba, “Little Places” by Crystal Koo, “The Red Cup” by Francezca C. Kwe, “The Secret Adobo Wars” by Kate Osias, “My Life as a Bee” by Michelangelo Samson, “The Missing” by Eliza Victoria and “Cruising” by Isabel Yap.  All in all, the line-up of writers represents an intriguing mix of experience and promise, of talent and polish.  Alfar and Lacuesta speak of the selected stories with overwhelming pride and awe, with Alfar describing the writers as “luminous lights.”

While the two have chosen English as the language for their series, they said they’d be very happy should someone do a similar collection for short stories in Filipino. “I would buy that book,” Alfar says, adding he would also buy similar projects in Ilocano or other languages. “It would be a great idea to have a Filipino selection,” says Lacuesta.

The act of curation makes “MAXIMUM VOLUME” part of a long Filipino literary tradition. It calls to mind what noted literary critic Dr. Isagani R. Cruz used to do when he selected the best poems and short stories of the month for a weekly publication. Cruz also edited “The Best Philippine Short Stories of the Twentieth Century: An Anthology of Philippine Fiction in English,” which collected stories from 1925 to 1998.  Similarly, eminent poet and literary critic Gemino H. Abad gathered tales for a six-book definitive collection in three volumes “Upon Our Own ground,” “Underground Spirit,” and “Hoard of Thunder: Philippine Short Stories in English 1990-2008.”

Anvil’s Bolasco recalls how Jose Garcia Villa would announce a yearly honor roll of writing, and how the iconoclastic poet published in 1929 “Philippine Best Short Stories of 1928.”  “I reckon that for the new generation, it would be Sarge and Dean (doing the honors),” says Bolasco.  “The goal is to encourage the production of a good body of exciting works for today’s young as written by the best of the writers age 45 and below.”

It is a long-term endeavor for the two, with plans already underway for a second book. “On the day we launch ‘MAXIMUM VOLUME’ for 2014, we will send out a call for ‘MAXIMUM VOLUME’ for 2015, with the same June 30 deadline so people will have a bit more time,” Lacuesta says. “There are more super talented writers who are coming out.”

In the meantime, they have not forgotten their own craft. Alfar is working on his third volume of stories and his second novel, while Lacuesta has two books coming out this year, a nonfiction collection of his magazine work and a new collection of short stories. He also has a novel that’s practically finished but, as he explains, “I haven’t got the guts yet to publish it.”

Right now, they’re focused on the challenge of ensuring the widespread circulation of their pet project. Being communications professionals, they have not blindly taken this risk. “The reality here and abroad is that the anthologies are the poorest sellers (among bookstore titles),” Alfar says. “But even if it wouldn’t do well, we would still do it. It’s that important.”

Its publisher however believes that the series would do well “if promoted well and launched with more than enough fanfare.”  It’s reassurance enough for Alfar who has worked with the publisher in the past. “With (Anvil’s support), this book has a better reach, better distribution, better marketing.”

“Maximum Volume” brings together so many disparate elements that it’s startling. “This is the interesting thing,” Alfar says. “Sarge, though he claims to be genre-open, really comes from the realist style. I come from the other side, the speculative fiction genre. Putting them together and calling them fiction, whether his realist or my speculative, these are still stories and that’s how it should be. We each drew writers from our genres and in the end it was a delight.”

It’s ambitious because it has to be. At its heart, “Maximum Volume” seeks to be an integral element of an ongoing chronicle of the growth of a writing nation. It is an invitation to what promises to be an infinity of Filipino writing talent, one that the editors hope will grow as the years—and the “Volumes”—go by.

It’s also an open invitation for the reader to trust Dean Alfar and Sarge Lacuesta with their precious reading time. “Here are our choices,” Alfar says. “Read them. Experience them. “They will come to the realization, I hope, that story is story. It’s just a matter or labels or preferences, but what is good is good.” •

• “May Day Eve” by Nick Joaquin

• “The Death of Fray Salvador Montano,

• “The Secret Origin of Spin-man” by Andrew Drilon

• “The Hero of the Snore Tango” by Ian Rosales Casocot

•  “We Won’t Cry About This” by Socorro Villanueva

• “Shut Up and Live!” by Lakambini Sitoy “Penmanship” by Jose Y. Dalisay

•  Any story from “The Butcher, the Baker, the Candlestick-Maker” by Gilda Cordero Fernando

• “The Virgin” by Kerima Polotan

• “May Day Eve” by Nick Joaquin